Here's the Pitch: The Amazing, True, New, and Improved Story of Baseball and Advertising 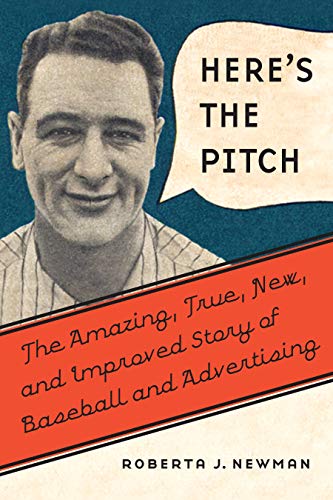 “The book’s strong point is in its critique of advertising and that industry’s relationship with baseball as a reflection of the changes, for good and bad, in American society. Those observations will stay with the reader long after reading its pages.”

In Here’s the Pitch, author Roberta J. Newman, a clinical professor at New York University, undertakes an academic survey of the relationship between advertising and baseball in promoting consumer products. As literacy in America increased, notes Newman, so did advertising. And that rise in advertising happened to coincide with the rise in popularity of America’s National Pastime. As such, advertising involving baseball reflects the changing culture of this country.

Newman documents the early synergy between baseball and product placement and promotion, exemplified by the Bull Durham signs erected on outfield fences in the early 1900s to market the tobacco product within the stadium to a captive audience.

Products most commonly pitched in those early days were almost exclusively male-oriented—tobacco and liquor chief among them—as advertising shifted from selling baseball itself to using its stars and their publicly crafted images in the promotion of products. This resulted in the projection of the athlete’s positive qualities—health, youth, success, hard work—onto that which they endorsed.

Sometimes player images were used as premiums packaged with products, such as the introduction of baseball cards as a means to entice repeat purchases of tobacco. Player’s likenesses were often employed without permission, a legal practice at the time, in an attempt to transfer the impression of strength or quality generated by that player to the product being advertised.

Players were able to convert endorsements into real money. Ty Cobb was paid $15,000 in 1909 to promote the Hupmobile and $25,000 in 1924 to represent Ford in print advertisements. Babe Ruth, thanks to his agent Christy Walsh, soon demonstrated that celebrity athletes could earn as much or more off the field as on it.

Newman delves deeply into the arrival of minority baseball players, beginning with Jackie Robinson, and their slow acceptance into the mainstream of commercial advertising. Latinos are even slower to gain entrance into this world, and often are portrayed in negative stereotypes.

Here’s the Pitch is not a fully documented history of advertising and baseball. As stated before, the book is best characterized as an academic survey, with the author offering critiques of various ads and the psychology behind the images and text. Some of it, especially surrounding the portrayal of Hispanic athletes, is extremely thought provoking. Some of it comes off as repetitive, and passages dwell on individual athletes, especially Mickey Mantle, David Ortiz, and Derek Jeter.

The book’s strong point is in its critique of advertising and its relationship with baseball as a reflection of the changes, for good and bad, in American society. Those observations will stay with the reader long after reading its pages.

Here’s the Pitch, however, is largely silent on the impact of advertising and baseball’s expanding global reach, especially regarding the increasing number of Asian players.

There is only a passing mention of baseball’s current problem in promoting its athletes—arguably, baseball has not had a nationally marketed figure since Derek Jeter. As the author points out, baseball’s impact remains largely regional and despite impressive digital marketing efforts by Major League Baseball, there are no baseball players, active or retired, approaching the commercial popularity of their counterparts in professional basketball or football.

Also missing is any look at the tremendous growth in Major League Baseball licensing and merchandising, with fans of players wearing facsimile uniforms of their favorite athletes, serving as walking advertisements for both their favorite team and player, as well as for the shirt manufacturer and it’s prominently displayed logo.

While not a definitive historical overview of baseball and advertising, Here’s the Pitch should be referenced in any study of the relationship between the grand old game and the world of consumer product promotion. It is a serious review of two industries that grew up together and remain important to each other.