Here We Are: A novel 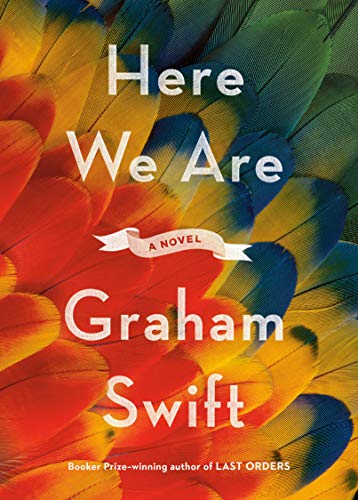 “Graham Swift has a remarkable ability to slip back and forth in time, while identifying the many small incidents and markers that shape and reshape the lives of his characters.”

In Here We Are, as in many of Graham Swift’s novels, the setting seems to be of no particular consequence and the principal characters are few in number, leading modest lives of no major significance. Swift’s prose is spare and unsuspectingly powerful.

The setting is the seaside resort of Brighton in the 1950s, where the British working and middle class spend a week or two of their summer as a respite from their decidedly mundane lives.  Here they are entertained by a Holiday Variety Show featuring the three main characters of the novel: Jack Robbins, the compere; Ronnie Deane, the magician; and Evie White, his assistant. Their stage names are Jack Robinson and the duo of Pablo and Eve. The lives of these three people from different backgrounds and locations come together in Brighton by varied routes. They become a triangle of complex personalities tied together in a troupe of entertainers during the summer season and beyond.

The central figure of these three is Ronnie Deane. His father, Sid, is a merchant seaman who died in the war, and his mother, Agnes, a charwoman. When the bombing of London begins during World War II, the eight-year-old Ronnie is sent, as were many children, to live outside the city in a safer location. In Ronnie’s case the place is Oxfordshire to a house called Evergrene the home of Eric and Penny Lawrence. It would be a transforming experience for Ronnie and one that ultimately set him onto a long and winding path to Brighton.

Ronnie found himself living in a modest country home in what seemed to him a life of luxury. He grew fond of his new parents, and they of him. During his time with the Lawrence’s, Ronnie learns the arts of the magician from Eric Lawrence, who is a master of the craft. When the war ends and Ronnie returns to London, he is unhappy, alienated from his mother, and longing for his wartime life with the Lawrences. Ronnie will maintain contact with Eric Lawrence continuing his training in magic and showmanship.

Jack Robbins and Evie White were raised by their mothers who pushed them to achieve. Jack always felt his mother’s hand pushing him to overcome his shyness. At some performances as compere on the Brighton stage, Jack needed and felt his mother’s “brutal push” to take the first step onto the stage. When Jack appears at the opening of the novel he has one of these moments of paralysis, unable to take that first step on to the Brighton stage. He asks himself who he is, and answers that he is nobody, and then, where he is, and the answer is nowhere. Yet he is a natural on stage and will ultimately forge a successful career in the new medium of film. Ronnie and Jack became pals in the military, several years before Brighton where they reconnect.

Evie White is led to the stage as a preteen. Her mother takes her to every available audition, reminding her to take care of her legs and smile. She is a natural. When she is passed over for a part, her mother remains upbeat, telling Evie that “her turn would come.” She could smile and dance, but not sing. As a chorus girl, she would mime the singing. When she answered the advertisement for a magician’s assistant she found herself in an interview with Ronnie.

This sets the stage for the three to come together in Brighton. What follows is the substance of the novel, a simple and complex story of three people, each carrying the impact of their mother with them. It is also a brilliant character study of complicated people whose lives intersect and reshaped one other. Swift unveils their lives in layers, slowly and methodically, laced with quiet surprises. Dramatic changes take place in undramatic ways.

Graham Swift has a remarkable ability to slip back and forth in time, while identifying the many small incidents and markers that shape and reshape the lives of his characters. The illusion that lives can be controlled along a desired path with the individual as navigator is repeatedly negated. The intricacies of the story are many, and Swift never loses control. This is part of what marks him as one the great contemporary British literary figures.