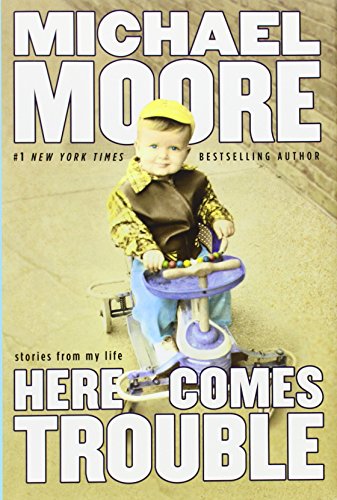 “His enthusiasm for participating in the artistry of an alternate profession that lies beyond the area of his expertise is certainly something that anybody who’s ever pursued a hobby can identify with, which is precisely what gives Mr. Moore’s new memoir, Here Comes Trouble, both its emotional charm and its literary insignificance. . . . Ironically, the one thing missing from one’s overall enjoyment of Here Comes Trouble is a director.”

Michael Moore writes with the same passion for books that Michael Jordan, moon-eyed for the boys of summer, swung at baseballs. And Paul McCartney picked up a paintbrush. And Kevin Bacon strapped on a guitar.

His enthusiasm for participating in the artistry of an alternate profession that lies beyond the area of his expertise is certainly something that anybody who’s ever pursued a hobby can identify with, which is precisely what gives Mr. Moore’s new memoir, Here Comes Trouble, both its emotional charm and its literary insignificance.

As a filmmaker, and a very good one, Michael Moore’s instincts for advancing a narrative are linear rather than exponential, meaning that much of his writing seems designed specifically to discourage contemplation.

His sentences, stripped of emotional and intellectual complexity, can often hurry the reader along past both teachable and contemplative moments for the same reason why certain elements might be edited out of a film—elements such as excessive wordiness or prolonged scenes of quiet, yet revealing, introspection—because they invite pause which can disrupt the forward momentum of a movie and confuse an audience. (Perhaps some of this also comes from his experience as a journalist, a profession known for its prohibition of nuance and intimacy.)

Regretfully, Mr. Moore’s cinematic expertise prevents him from being able to take full advantage of the literary form, making Here Comes Trouble much more a testament honoring the author’s celebrity rather than his talent.

Evident, too, is a love of God and country that, at times, comes across as being fairytale-ish and unsubstantiated by the content of the material. Weaponized and heated just slightly, it would be the same blind patriotism that Moore has been railing against his entire career.

At one point, after proclaiming the virtues of his own pacifism, Moore extends the circle of his deeply Christian love of humanity to embrace the cowardly proponents of violence, pleading with them to, “—RELAX!” offering the meager rationale, “We like you! Heck, you’re an American!”

That said, there is a moral decency that runs through the center of the book, not to mention a genuine likeability about Moore, that for some will forgive the mediocrity of his writing style. In many ways, his life seems Capra-esque in its retelling. There is Michael, age 11, in Washington, DC, getting separated from his mother at the Capitol building. He is lost and afraid. Suddenly, and quite by accident, he is rescued by [SPOILER ALERT!] Robert Francis Kennedy.

And there is Michael again, decades later, lost and afraid because of the personal abuse and threats made to him and his family following the infamous acceptance speech he gave after winning the Oscar for Bowling for Columbine at the 2003 Academy Awards—the speech where he correctly pointed out, as proven by history, that the United States was going to war with Iraq for fictitious reasons.

He is ready to give up both his filmmaking and his activism when, suddenly, he is rescued by Kurt Vonnegut, whose sage advice to, “. . . quit complaining and get back to work,” hits him with all the profundity of a tinkling bell on George Bailey’s Christmas tree.

There, again, is Michael, the young editor of the alternative weekly, the Flint Voice, which he helped found. The Lapeer County Press, which prints the Voice, has been raided by police and he is fighting to get the Privacy Protection Act passed by Congress, which will prevent the breaching of First Amendment Rights by law enforcement hoping to intimidate left-leaning media outlets with surprise seizures. He is lost and afraid. Suddenly, who calls him up on the telephone and offers assistance? John Lennon!

There are stories about author Moore, this Eagle Scout and lifelong member of the NRA, starting his first newspaper following the execution of Lee Harvey Oswald on live national television, and Michael Moore as a young man accepting the confession of the distraught chaplain who in 1945 had blessed the first atomic bomb released from the belly of the Enola Gay only hours before Hiroshima was obliterated.

Ironically, the one thing missing from one’s overall enjoyment of Here Comes Trouble is a director.

Dwayne Booth (aka Mr. Fish) is the author of Go Fish: How to Win Contempt and Influence People. He is a writer and political cartoonist for Truthdig.com and Harper’s magazine.