Here and Now and Then 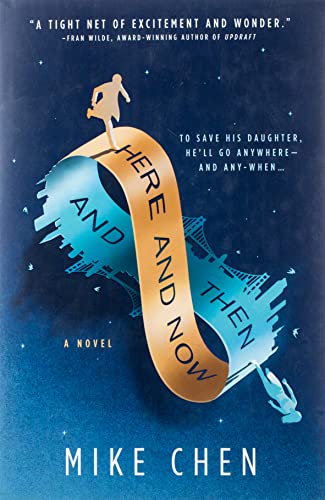 “What makes this novel a delight is the very relatable tale of a father struggling to know and love his daughter, to protect her from harm while allowing her to make her own choices and fulfill her potential.”

This debut novel by Mike Chen is a charming and satisfying tale of a father’s devotion and the hard choices required by love. A time traveler named Kin, stranded in the past, gets married, and has a daughter. When the time travel cops finally come for him, they force him to abandon his family and return to his own time, where his fiancée has no idea that he’s lived for years as another person since she saw him last. Kin is torn between his two lives, each secret from the other and separated by time.

As science fiction, this book brings little that’s new to the time travel genre. The tropes are here in full force: secret agents, flying cars, a nearly omniscient Temporal Corruption Bureau trying to keep the universe from unraveling due to causality violations. What makes this novel a delight is the very relatable tale of a father struggling to know and love his daughter, to protect her from harm while allowing her to make her own choices and fulfill her potential.

The time travel backdrop serves mostly to create a series of painful situations. Kin's family in the past is in danger, but he only sounds crazy when he tries to convince them. "You have to trust me. We're in danger. We need to leave. Pack light. They could be right behind us. They could be watching now."

When he's forcibly brought back to the future, he discovers that the rest of his daughter's life, after he disappeared, was a self-destructive cycle of grief and addiction. Despite the danger, he can't help trying to interfere. "There had to be some way . . . to nudge her back on the right path, to course-correct her destiny into who she was supposed to be."

The people in the story are all well-drawn and believable, with no real villains. Even when the Temporal Corruption Bureau determines that Kin’s daughter must be killed to protect the future, the decision is represented by his fiancée’s brother, a likable friend compelled to do something horrible because it must be done. The ending is clever and surprising, a twist that neatly ties up all loose ends and provides a happy ending for all involved.