Her Last Flight: A Novel 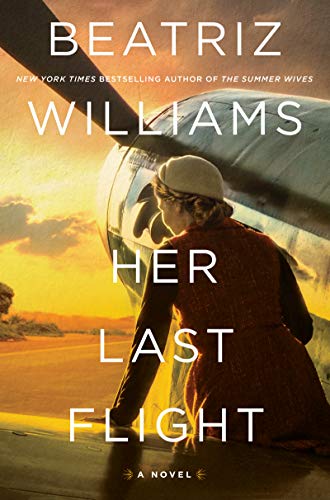 “Beatriz Williams deftly fits together the characters, stories, and themes that the narrative services into a cohesive whole. The pieces all align perfectly, and she has shaped them together brilliantly. Her Last Flight is a gem of a book.”

Beatriz Williams has already proven herself a master of the historical fiction genre. With her latest, Her Last Flight, she has again proven herself worthy of the honorific.

Inspired by the life and exploits of famed aviatrix Amelia Earhart, Williams deftly weaves a story that spans multiple time periods and multiple points of view, with strategically placed surprises that readers will not soon forget. In the process, the novel answers the hypothetical (or, is it?) question of what would have happened to a legendary aviatrix who disappears from public view, presumably killed in a  crackup, but who survives and thereafter lives a life of happy anonymity rather than return to the glare of the spotlight.

Janey Everett is a photojournalist eager to tell the story, not of Irene Foster, the renowned aviatrix who disappeared, but of Sam Mallory, the man who taught Irene to fly and who, himself, disappeared. Janey’s search begins in 1947, 10 years after the disappearances of both pilots, with her discovery of the wreckage of Mallory’s plane in the Spanish desert, a sand-buried coffin containing bones and a journal with a cryptic entry—GM to rescue at last thank God She will live—which begs the question: Is Irene Foster the “she” referred to?

Janey’s quest takes her to the quaint village of Hanalei, on the north shore of Kauai, in what was then the Territory of Hawaii, where she meets Irene Lindquist, whose initial denials soon give way to an admission that she is, indeed, the once famous aviatrix.

For Janey, Irene is but a means to an end. She is, after all, a living, breathing witness to the life and times of Sam Mallory, whose legendary adventures as a pilot is the story Janey longs to tell. But Janey soon learns there is more to Irene than she gives her credit for.

Her Last Flight follows three different storylines. The first in 1928, told from Irene’s point of view, when she initially meets the man who trains her and then becomes, in effect, her second fiddle as he transforms her into the woman pilot with whom the world falls in love. But after the two are recovered from Howland Island in the South Pacific, where they were forced to land after running out of fuel between Australia and Hawaii in an effort to navigate the world, their fortunes diverge.

The second story is a mix of Sam’s, now estranged from his one-time protégé, and his involvement in the Spanish Civil War in 1937, and Irene’s search for Sam that leads her to, herself, disappear, presumed dead.

The final story, the one that ties them all together, is Janey’s discovery of Irene in Hanalei, 10 years after her presumed death, where she grasps the last pieces of the puzzle and completes a picture that, until then, has remained a mystery to the world. At the same time, in discovering Irene, Janey discovers herself.

Her Last Flight is a compelling read about the human condition. It teaches the reader, as it taught Janey, that notwithstanding preconceived notions people may have about others, “nobody is all good or all bad; that hardly any battles are fought between good and evil. There is more good and less evil, or more evil and less good. . . .”

The author also explores the price of fame, or maybe it is more aptly described as the cost of fame. Sometimes, the lesson goes, one must lose one’s self in order to find one’s self. Williams writes of Irene: “. . . this business of being the Aviatrix had become so thorough, the moments of being just Irene so seldom, that she was beginning to feel that the Aviatrix had taken over the rest of her, like she had been painted over and could no longer find the original soul inside, and that even to her husband . . . she was the Aviatrix and not Irene.”

Making the different stories and characters mesh surely must have been a challenge for the author, who may as well be talking about herself when Janey describes her own struggle to finalize the story of Sam Mallory. “I thought that once I collected all the pieces of this puzzle, it would be a snap—so to speak—to arrange them in place and link them together with a few choice words. It turns out that writing books doesn’t work that way.”

Beatriz Williams deftly fits together the characters, stories, and themes that the narrative services into a cohesive whole. The pieces all align perfectly, and she has shaped them together brilliantly. Her Last Flight is a gem of a book.