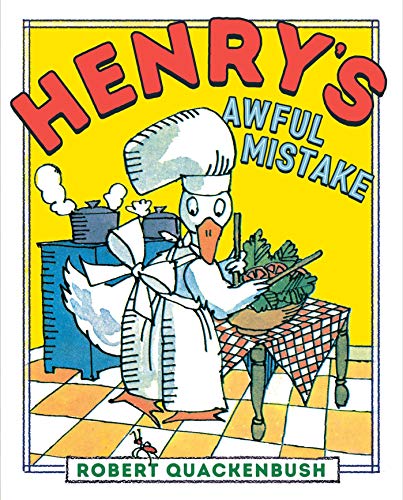 “Henry’s Awful Mistake has remained a beloved bestseller for the 4–8-year-old set for the past 40 years.”

First there was the old lady who swallowed a fly and then exacerbated her problem by taking ever more drastic measures to deal with the initial mishap, ultimately swallowing a horse. Following in her unfortunate footsteps is Henry the Duck who wreaks havoc at home when he tries to rid himself of an ant in his kitchen.

The story begins with Henry preparing a beautiful dinner to serve to his friend Clara. After a full day of chopping, stewing, and stirring, all is ready and he is looking forward to the evening. Then Henry spies an ant in the kitchen. Afraid Clara will see the ant and think that he has a dirty house, Henry embarks on a mission of extermination.

First he chases the ant with a frying pan, then he pulls the stove away from the wall to find it in its hiding place, and breaks a hole in the wall when the ant slips through a crack. The mayhem continues with one hilarious mishap following another.

The mess and damage Henry creates is horrendous. Finally the house in such a disastrous condition Henry realizes he must postpone the dinner party. Weeks later, when he’s resettled in a new home (yes, he destroyed his house), he invites his friend again. Just as Clara arrives at the door, Henry sees another ant. Has he learned his lesson?

Originally published in 1980 by Parents Magazine Press, Henry’s Awful Mistake has remained a beloved bestseller for the 4–8-year-old set for past 40 years. Last year it was reissued with Quackenbush’s original, entrancing woodcut style illustrations for a new generation of young readers who will be charmed by this hapless character.