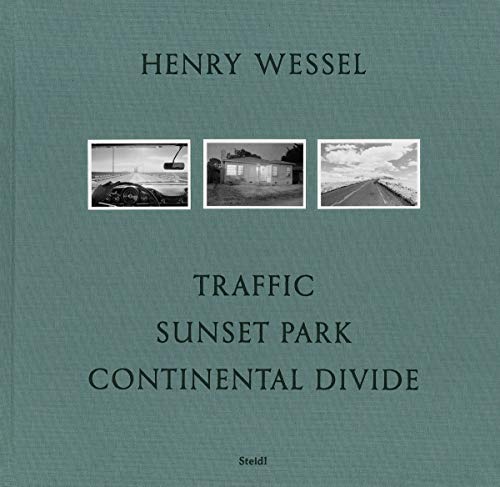 Henry Wessel documents life in the 20th century with a well-established black and white photographic style. Typically in his work, everything in the frame is sharply focused and delineated, and composition is the ultimate protagonist. Wessel’s Traffic/Sunset Park/Continental Divide, is divided into three sections and is focused on vehicles, the exteriors of homes, and landscapes, respectively, rather than people’s interactions with each other or how they live and work.

The first section, Traffic, are images of drivers photographed while driving as seen from a parallel car’s point-of-view—the profile of car and driver at the wheel. The photographs of people as characters are mildly entertaining and are reminiscent of snapshots: dead-on, quick, unstudied, and spontaneously capturing a car driving alongside.

What is most intriguing about these images is the interplay of gray tones, the off-kilter framing through the window, the Mondrian-like fitted shapes of the compositions as well as how much they reveal of the driver’s appearance and attitude, which is also reflected in their choice of vehicles. The viewer does not engage with any of these people. They remain objective and distant in their own worlds.

The majority of the photographs in the second section, Sunset Park, are nighttime shots of residences in that neighborhood. Most of the homes in the Sunset Park area were developed in the 1940s as modest, one-story single-family company housing during World War II by the Douglas Aircraft Company (now McDonald Douglas) for worker’s families during the boom of building aircraft for the war effort. But there is no attempt made to place them in a historical or social context. Indeed, the book features no captions, titles, dates, nor essays that give us any indication of the importance of any locations shown in the book.

Many of the nighttime images in Sunset Park are low-contrast, but Steidl has achieved an impeccable level of quality at differentiating and maximizing the impact of the rich gray tones in the shadow values.

In general the photographs in the Sunset Park section leave little to distinguish them from one another. Several of the nighttime shots with lone porch lights illuminating entrances do have an air of mystery. However, while these are intriguing, the majority of images in the section are ultimately uninteresting. There are four or five photos of trees along the sidewalk that stand out as being uniquely commanding, and they are the most accomplished images in the Sunset Park section displaying creativity and a high degree of technical photographic proficiency.

The final section titled Continental Divide begins by showing shacks, buildings, and storefronts and it eventually progresses to views of unpeopled streets, barren highways, and cloudless desert landscapes. The excessive brightness and contrast of these images impart the feeling of sun-bleached isolation and barrenness of modern society. Whereas the first section, Traffic, emphasizes the human quality of the image, the final section of the book stresses the aesthetic qualities of the image while the lighting and content are prosaic and unexceptional.

The book is once again exemplary in its masterly printing by Steidl with black and white images on luxurious heavyweight paper and rich gray tones on the 12 x 11.5 inch sheets.

Henry Wessel is a lauded photographer whose work is in the collections of international museums. If you are familiar with his work and have enjoyed his images you will find this a rewarding book.