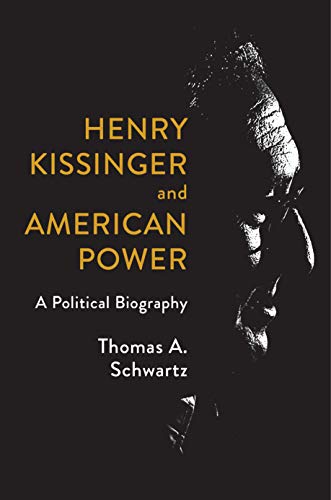 “[Henry Kissinger] was a great if flawed public servant—above all a patriot, who like Bismarck, traveled the current of history and attempted, however imperfectly, to steer the nation to safety and security.”

Vanderbilt University historian Thomas A. Schwartz describes his new book about Henry Kissinger as an effort to “reintroduce” Kissinger to American and international readers as neither the great statesman of his many admirers nor the evil war criminal of his many detractors. Kissinger, he writes, was and is “brilliant, devious, suspicious, arrogant, insecure, obsequious, paranoid, thoughtful, tenacious, domineering, vulnerable, direct, deceptive, insensitive, eloquent, petty, turgid, witty, and thin-skinned.”

Schwartz’s list of Kissinger traits, you may have noticed, includes three character flaws for every admirable quality. Schwartz’s supposed middle ground on Kissinger leans toward the detractors. He concludes that for Kissinger the formulator and implementer of U.S. foreign policy during 1969 through 1976, “[d]omestic political advantage and personal ambition” trumped grand strategy and the national interest. Schwartz’s evidence for this conclusion, however, is rather thin.

That is not to say that Kissinger wasn’t ambitious and didn’t concern himself with domestic politics. Ambition is a necessary quality for those who would exercise political power. And any statesman who fails to consider domestic politics in formulating and implementing foreign policy is doomed to failure—this is especially true in a democracy. Foreign policy without the benefit of hindsight is the art of the possible in an imperfect world based on imprecise information. It was Bismarck who said that the statesman cannot direct the current of history, he can only travel down it and steer.

Schwartz covers Kissinger’s life from 1923 to 1968 in 64 pages. The bulk of the book covers Kissinger’s government service as National Security Adviser and Secretary of State in the Nixon-Ford administrations. The author recognizes Kissinger’s (and Nixon’s) accomplishments—the opening to China, triangular diplomacy with China and the Soviet Union, shuttle diplomacy in the Middle East—but sees politics and personal ambition as the driving force of policy.

This is unfair to Kissinger (and to Nixon, for that matter). Kissinger had been thinking and writing about national security policy for more than 25 years when he joined the Nixon administration. There is nothing he did as a top foreign policy adviser that wasn’t foreshadowed in his previous books and articles.

Kissinger’s pessimistic view of human nature that informed his approach to foreign policy was evident in his college senior thesis on Spengler, Toynbee, and Kant. His view of conducting foreign policy on the basis of a global balance of power was reflected in his first book A World Restored, which heralded the peacemaking efforts of European statesmen in the post-Napoleonic period. His approach to nuclear weapons and arms control was first manifested in his book Nuclear Weapons and Foreign Policy.

What is more, Kissinger’s tragic view of human history, as both Niall Ferguson and Barry Gewen have pointed out, can be traced to what he and his family experienced in Nazi Germany in the 1930s and to his service in the U.S. Army during World War II.

To be sure, Schwartz correctly observes that Kissinger (with Nixon’s blessing) ruthlessly excluded the State Department from secret negotiations with North Vietnam, China, and the Soviet Union. Nixon, like Kennedy and Johnson before him, wished to conduct foreign policy from the White House instead of the State Department. Kissinger used secrecy, cunning, and deception to further what he believed to be American interests (which sometimes coincided with his own personal ambition). He often clashed with rivals within the Nixon and Ford administrations. And like many wielders of power, Kissinger could say one thing in public, while saying the opposite in private.

Schwartz condemns Kissinger’s involvement in the FBI’s wiretapping of a few of his assistants who were suspected of leaks during the Vietnam War. Wartime administrations throughout American history have frequently used unsavory, even arguably unconstitutional, means to further U.S. national security interests, but the Nixon administration often gets singled out for its wartime abuses.

It is also true, as Schwartz points out, that Kissinger cultivated the news media and for the most part received a favorable press while he was in office. The media recognized that Kissinger had a complicated relationship with Nixon—their worldviews were similar, but their personalities were very different. The national media loved Kissinger in part because they hated Nixon.

Schwartz faults Kissinger for failing to promote human rights and for aligning the United States with dictators and unsavory regimes—the Shah in Iran, Pinochet in Chile, the apartheid regimes in South Africa and Rhodesia. But personal ambition and domestic politics do not explain Kissinger’s approach to these regimes. And the notion that human rights can be a cornerstone of U.S. foreign policy should have been dispelled by the failed presidency of Jimmy Carter.

Personal ambition and domestic politics also do not explain Kissinger’s continued promotion of détente with the Soviet Union during the Ford administration. For Kissinger, détente was an important element of triangular diplomacy whereby the United States had better relations with the Soviet Union and China than those countries had with each other.

Or consider Vietnam. Nixon and Kissinger inherited an unpopular war initiated and expanded by the two previous Democratic administrations. If personal ambition and domestic politics were the driving force behind policy, the incursions into Cambodia and Laos, the bombing of North Vietnam, and the mining of Haiphong Harbor would probably not have been undertaken. These were politically risky operations that were designed to pressure the North Vietnamese to negotiate an honorable end to the war.

While Schwartz refuses to join those who call Kissinger a “war criminal,” he unfavorably compares Kissinger to Robert McNamara who “apologized” for his role in the Vietnam War—Schwartz implies that Kissinger should have done likewise.

But it was not Henry Kissinger who sent tens of thousands of young American men to fight and die in a war that he did not believe could be won. Nixon and Kissinger inherited the mess created by President Johnson and Defense Secretary McNamara, and attempted to fulfill America’s commitment to South Vietnam while simultaneously and gradually withdrawing U.S. troops from the fighting.

“Vietnamization” was an example of the Nixon Doctrine whereby the U.S. would supply arms and equipment and training to its ally but South Vietnamese forces would do the bulk of the fighting on the ground. It was a recognition of the limits of American power and the constraints imposed by domestic politics. And in the end, it was domestic politics that sealed South Vietnam’s fate, as Watergate eviscerated Executive power and a Democratic Congress cut-off funding for our longtime ally.

Out of power, Kissinger continued to speak and write on foreign policy topics. He gave advice to Presidents of both political parties. He longed to return to power not solely because of his ambition but also because he believed he could meaningfully contribute to the nation’s foreign policy. He remained part of the foreign policy establishment—a cadre of men and women who presidents and their top advisers looked to for counsel.

Kissinger never exercised political power again. Instead, he became wealthy by using his international contacts and foreign policy expertise to provide geopolitical advice to businesses and corporations. He became an “elder statesman,” occasionally called upon by Presidents to chair commissions and provide counsel in times of crisis.

He also continued to write books—important books on history and international politics. His three-volume memoirs get short shrift in Schwartz’s book but they are—especially the first two volumes—among the best-written and informative memoirs of any American policymaker.

Kissinger’s 1994 book Diplomacy is a masterful tour of history’s great policymakers and diplomats (Richelieu, Metternich, Castlereagh, Palmerston, Disraeli, Bismarck), and a brilliant analysis of the competing visions of American foreign policy as exemplified by Woodrow Wilson and Theodore Roosevelt.

At age 97, Henry Kissinger still occasionally does interviews and continues to write about American foreign policy. He is not the war criminal or the Machiavellian demon that his detractors make him out to be. He was a great if flawed public servant—above all a patriot who like Bismarck, traveled the current of history and attempted, however imperfectly, to steer the nation to safety and security.