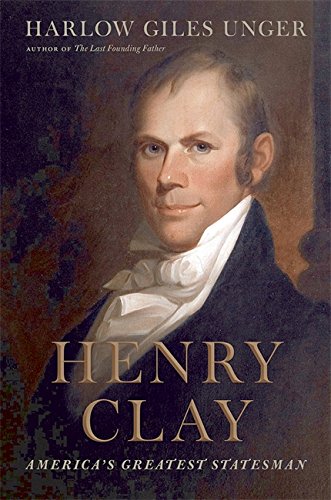 Henry Clay lived in an age when he could rise from a log schoolhouse to be perhaps not, as the author claims, America's greatest statesman but undoubtedly one of its major historical figures. The subject of this biography achieved success through ambition, genius, hard work, and talent in the right place for his time.

Clay was not entirely a self-made man, however. Like many thousands of American leaders of all types, then and since, he hailed from the diverse environment of Richmond, Virginia. He married the daughter of a wealthy man, a woman who stood by him in their problematic and tragic private life.

As a member of congress, Clay fought to fund the bridges, canals, and roads that the underdeveloped nation needed. Unger writes that Clay succeeded despite "facing fierce opposition from southerners who feared open roads as escape routes for slaves."

The resulting fiscal and physical infrastructure improvements would support the coming age of the locomotive, stationary steam engine, and steamboat as well as the mega industries they created. They also allowed the North to win the Civil War (and in different ways) build a new, modern South after the war, ending the reign of king cotton.

Henry Clay also championed the rights of the common man decades and far more than Andrew Jackson ever did. A successful lawyer who started with the eminent George Wythe, he resigned as a prosecutor before he even finished his first case, one against a slave.

Unger rightly paints Clay as a "omnibus," a compromise of different "riders" that a voter could selectively support, reject, or overlook. He was, for example, both an agnostic and a Mason, a slave owner but also a very public abolitionist.

Clay had many such contradictions. Thomas Jefferson considered him a great political supporter whom Andrew Jackson would see as a powerful enemy. According to Unger, a fellow senator spoke for many in describing Clay as a "gambler, bon vivant, philanderer, and politically ambitious lawyer."

The real man was so much more than his reputation and his resume. The latter included serving in the Senate under age, the youngest member of the House of Representatives, and the only freshman congressman ever elected speaker of the House. Although defeated four times for the office of the country's chief executive, he was often more powerful than the president.

Unger writes that Clay rightly achieved fame for "weaving historic political compromises that held the nation together and prevented civil war long enough to form an indivisible Union." More accurately, he bought the time needed to create a nation not allowed to fail, in 1860 or ever.

This great man already has great biographies but Unger offers here a short, engaging, and worthwhile work for the reader who wants to start to understand America in the decades before the Civil War. In a nation today, at least as politically partisan and violently divided over race, both Clay and this new book about him inspires.