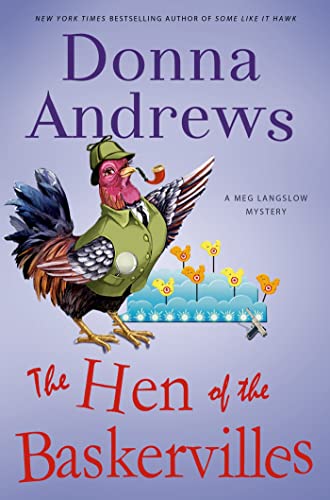 The challenge with cozy mysteries is finding the balance between lighthearted and serious. Murder, after all, is somber business. Yet the cozy crime genre usually is peopled with amateur sleuths and eccentric, lovable characters often doing silly or mundane things.

Ms. Andrews hits the balance in the 15th book in her Meg Langslow series. These books are all titled with some play on words involving birds (starting with the straightforward Murder with Peacocks and advancing to such groaners as Stork Raving Mad, Owls Well that Ends Well, etc.)—which, despite their absurdity, have bearing on the plot.

In Hen of the Baskervilles there really are chickens involved, and they belong to a couple named Baskerville. Meg learns this through her gig as deputy director of the Virginia Un-Fair, an event competing to replace the original state fair that’s gone kaput. She’s roused from her bed in the sheep and llama exhibition barn to help find stolen heirloom-breed chickens.

Thus begins a rash of trouble that appears on one level to be somebody (perhaps a competing organization?) trying to sabotage the Un-Fair. On another level it seems related to the murder of an exhibitor’s spouse.

Here Ms. Andrews diverts us with a red herring before the crime is even committed. She sets up so obvious a victim that it comes as a surprise when someone else gets knocked off. Then she provides us with oodles of promising suspects to choose from.

As far as the police are concerned, the main suspect is Meg’s friend Molly—the victim’s husband, an artisanal cheese maker about to lose her farm to divorce. Meg knows that Molly is innocent, but how can she prove it?

As a blacksmith and mother of toddler twins, there’s not much she can do beyond support her friend and keep her senses tuned for the obscurities and oddities that might turn a case. So she carries on at the Un-Fair, keeping order amid constant chaos, and asking the questions the authorities don’t consider.

Because of her success in previous cases she and the cops have mutual respect so she doesn’t need to defy them and fly solo. Well, most of the time. And they listen to what she has to say . . . most of the time. They work at cross purposes enough for Meg to find danger, but well enough for her to get out of it, exposing the killer at the same time.

New readers uncertain whether to try this series can take their cue from authors who use the same tone, such as Charlotte MacLeod (aka Alisa Craig) and Joan Hess. Like these erudite and witty writers, Ms. Andrews give us a heroine who is smart, phlegmatic, compassionate, and wry, an island in a sea of dotty relatives and bizarre neighbors in a quaint small town.

Meg’s inherent niceness and sharp mind go along with tongue-in-cheek good humor. Her voice as much as any plot line forms the main appeal of these books. Ms. Andrews could conjure up just about any scenario and readers would go along for the ride, smiling.

Hen of the Baskervilles delivers a brain teasing mystery softened by small town kerfuffles involving people you recognize or wish you knew. Once again justice triumphs and life goes on happily ever after—until the next bird-themed crime comes around and they do it all over again.