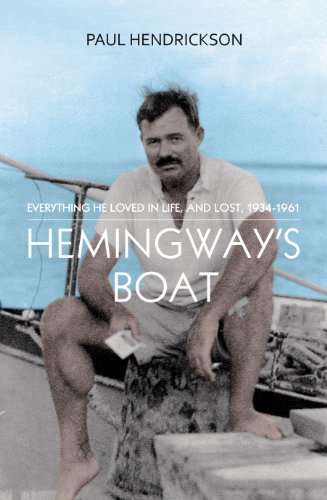 “Hemingway’s Boat: Everything He Loved in Life, And Lost, 1934–1961 is, in the sculpting hands of Paul Hendrickson, as dramatic, as expressive, as human as Hemingway himself was.”

It would not be unimaginable to declare that anyone who loves books, enjoys reading, or graduated from high school or college is at least familiar with the name Ernest Hemingway. Almost as improbable would be one of the aforementioned having not been exposed to his work. Hemingway is iconic, controversial, and, understandably, not everybody’s cup of tea.

Hemingway’s Boat: Everything He Loved in Life, And Lost, 1934–1961 is, in the shaping hands of Paul Hendrickson, as dramatic, as expressive, as human as Hemingway himself was.

Mr. Hendrickson’s prologue is a dissertation in microcosm—a thorough ramping up and exposition of Hemingway’s Pilar and the events surrounding it. His research is pronounced, his passion for the subject matter self-evident.

He declares his heady goal for the book very early on: “. . . to lock together the words Hemingway and boat in the same way that the equally locked-together and American words DiMaggio and bat, or Satchmo and horn, will quickly mean something in the minds of most people, at least of a certain age.”

That sentence must have been posted or sitting near his keyboard as he compiled Hemingway’s Boat because having taken in the wide expanse of the work in its erudite, carefully woven manner, I find it utterly implausible any reader could not “lock together” the man and everything his boat brought to his life.

Author Hendrickson’s laborious research included trips all over the U.S. and into Cuba itself to see Pilar. He gives us insights and opinions summoned from documentary archives and scores of personal interviews conducted with living descendants and relations of Hemingway, and these are some of the most fascinating and touching aspects of his 27-year chronicle.

Among the number who sailed on Pilar with Papa—around 500 visitors—there are both the famous and the unknown—all of whom reveled (or in some cases, reviled) in their association with Ernest. The author’s most prodigious accomplishments in Hemingway’s Boat occur when bringing us sometimes tenderly, often heartbreakingly, into the lives of these visitors.

One of those guests was a man named Mike Strater. Here is the sentence from the text:

“Strater, of course, was the six-foot, two-hundred pound, Princeton-bred amateur boxer and tennis player and painter with the hawk nose and slight stutter and girlish middle name of Hyacinth whom Hemingway had first met at Ezra Pound’s studio, thirteen years before, when he’d just come back to Paris from a reporting assignment to Constantinople for the Toronto Star.”

That is a 58-word sentence. Beyond a doubt there are longer sentences in literature, and this one imparts plenty of information.

Does its length make it wrong? No. Is it indicative of poor writing? I wouldn’t say that either.

Is it a matter of style? Most certainly.

As a reader, however, this is one of many instances in this book that cause me to slow down, to stop, to reread the passage. I want to be sure I haven’t missed a period or semicolon, to be sure I haven’t misread or skimmed over some tidbit of information I may have unconsciously hurried through to get to the other side of the sentence.

Paul Hendrickson is on the faculty of the Creative Writing Program at the University of Pennsylvania and was a reporter for the Washington Post. I’m not saying the long sentence is wrong, I’m saying as a reader it feels heavily layered and cumbersome. And yet one can’t help but appreciate the tact and finesse accorded the individual.

Nonetheless, the author’s beautifully detailed study lands him a well-deserved spot on the shortlist of outstanding biographers, joining such talents as David McCullough, Thomas Fleming, and Harlow Giles Unger. His willingness to shower his subject with neither ravishing praise nor withering criticism is, perhaps, one of the most sublimely eloquent aspects of this evocative book.

You could hardly do better than with Hemingway’s Boat for learning about one of America’s most complex and intense writers among the pantheon of our greatest.