The Helpers: Profiles from the Front Lines of the Pandemic 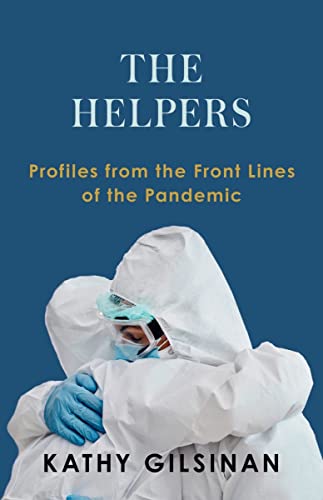 “Vivid, moving, revealing, and highly readable, The Helpers deserves a high place on the Covid-19 bookshelf.”

Atlantic contributing writer Kathy Gilsinan debuts with a wonderful collection of in-depth profiles that bring to life the stories of eight men and women who rose to the challenge of the COVID-19 pandemic. Despite “leadership blunders” throughout the nation, these extraordinary individuals joined an “outburst of altruism” that “saved lives and fed the hungry.”

Writing with compassion and understanding, Gilsinan captures the “stubborn spirit” that sustained these helpers in going far beyond their required jobs while many Americans bickered about wearing masks, getting vaccinated, and having to go without cream cheese and other products. While others focused on personal needs, helpers worried about the other guy.

Much of the action takes place in New York City, the early pandemic epicenter. “Rich New Yorkers could flee to the Hamptons or Cape Cod or anywhere else in the country with a little more space,” writes the author. “The essential workers of the Bronx needed to stay put and keep showing up.”

Those Bronx workers included Michelle Gonzalez, a nurse at Montefiore Medical Center, undoubtedly the most colorful of the helpers. “Thirty years old, short and loud with a brown ponytail and a Bronx swagger, Michelle cruised the hallways of the hospital with the self-assurance of a popular girl in high school, a backpack with a ‘Bernie’ button slung over her shoulders.”

A nurses’ union rep, she decried the lack of tests, ventilators, and personal protective equipment. While worried about her own parents’ health (Michelle carefully shed her hospital clothes in the hallway of their apartment building), she just kept going on the job: “You get knocked down, you get sick, you get traumatized—you get the fuck back up.”

When a TV ad proclaimed, “To the healthcare heroes saving New York, Montefiore thanks you,” Michelle became enraged. Tired of the “hero” shit, she wondered how much such advertising cost during Thanksgiving parade prime time, while her friends worried about running out of protective gear.

“Don’t call me a fucking hero, she wanted to scream.”

Another profile recounts the hospitalization of Huy Le, a 30-ish Vietnamese tech worker in California, whose mother dies from Covid, and who must himself be intubated to use an ICU breathing machine. His story drives home the nightmare experience of intubation, which must be done with great care, with nurses working very close to the patient’s open mouth.

Another helper, Nikkia Rhodes, a 23-year-old biracial chef and teacher, obtained funding and recruited culinary students to open a community kitchen in Louisville, Kentucky. She did so amid tumultuous protests over the killing of Breonna Taylor, an unarmed Black woman. “Nikkia figured they could end neither the pandemic nor racism. But they could cook.”

Then there was Paul Cary, a Colorado man in his 60s, who had worked as a fireman and paramedic, and now drove an ambulance. Always looking to help, he drove to New York as the pandemic raged (he’d made the same trip after 9/11).  He was so focused on other people’s crises that he “seemed to lack the will or the attention span” to stop the deterioration of his marriage, which ended in divorce in 2012, writes Gilsinan.

Paul had driven for 27 hours to get to New York “to give what he could in his one little corner of the crisis.” He would grow sick and die—in Michelle Gonzalez’s ICU unit.

Perhaps the most illuminating chapters in The Helpers concern a vaccine developer and the CEO of a ventilator company. They offer an unusually deep understanding of the remarkable work and sacrifices that gave the country much-needed life-saving equipment and medicine.

Hamilton Bennett was a young woman running the vaccine development program at Moderna, Inc., a pharmaceutical company in Cambridge, Mass. She had a passion for emerging infectious diseases, a “largely thankless” field with low financial incentives. In January 2020, she found herself leading efforts to create a Covid vaccine using an unproven technology that turned human cells into drug factories.

“The idea was as simple as it was devilishly difficult to execute: The company would fashion medicine from messenger RNA (mRNA), the genetic recipes that cells naturally used to whip up the proteins the body depends on for all kinds of functions—including powering the immune system,” explains Gilsinan. “The right mRNA sequence could instruct a cell to make any kind of disease-fighting protein a person could think of, sidestepping lab manufacturing in favor of using evolution’s own proven processes.”

It was a problematic approach. Messenger RNA molecules are unstable, and most vaccines are known to fail in development.

“Flying blind,” with no government rules yet in place for its novel approach, Hamilton’s team succeeded against great odds in producing a trial-ready vaccine. No other firm had ever tried to develop a vaccine so quickly, writes the author. After months of work, including 80-hour weeks, Hamilton and her team wept with relief upon learning that their vaccine had more than passed the trials.

Across the country in Seattle, Chris Kiple, the young CEO of a small ventilator company called Ventec, was facing a huge surge in demand for his machines. One of only a handful of factories in the world that manufactured ventilators, Ventec could produce about 200 a month.

The machines were complex. Ventecs, about the size of a toaster oven, consisted of 700 parts from more than 100 suppliers. With the country scrambling to produce ventilators, many of those parts were not readily available. Even so, Chris vowed his small company would “help rescue as many people as it could or break itself trying.”

Although he had no idea what people could do in the face of a crisis, Chris managed to create a partnership with General Motors to produce more Ventec ventilators. Working together for six months in a repurposed GM building, with the help of many retrained auto workers, the joint venture turned out 30,000 breathing machines.