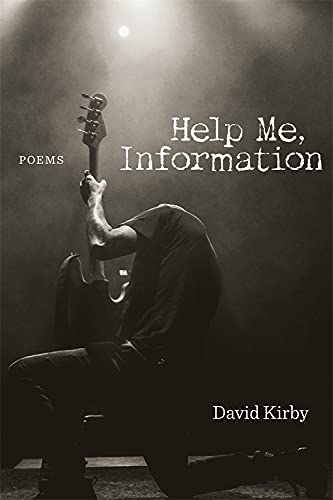 “Kirby has created a book that is also a lit picture window into a world that looks a lot like this one, but is infinitely kinder, more gentle, more full of awe and wonder and love . . .”

What are the elements of comedy? Dramatists have posited that tragedy is crucial to it. And some comedians insist their best material comes from the everyday, the news, the insanity of local current events. Meanwhile, novelists and poets agree that timing is everything, sometimes to a mathematical, which is to say musical, degree.

And then there’s David Kirby, a poet, who, by the way, lives in Florida, and, so, it could be said has had a head start.

Here he is launching into his poem, “My Girlfriend Killed James Brown”:

“Guy walks up to me in the park and says, ‘My girlfriend killed

‘Yeah, I got bumped up to first class, and when I saw who

my seatmate was, I went back to economy and told my girlfriend,

and even though she had the flu, we switch places, and three

weeks later, James brown is dead.’ How’d you like that on your résumé?

Or anyone’s death, do that didn’t bother the local woman

who got life recently for murdering her husband because, according

to the trial transcript, she didn’t want to ‘suffer the shame of

a divorce.’ Nothing good comes from murder. Well, if you murder

Hitler, yeah, but suppose you murder Hitler and somebody

That delightful story continues because Kirby’s poems are the novellas of poetry.

Which you might now because he’s written over 20 books, most of them poetry, all funny and musical and successful at making profound sense out of the absurd. Help Me, Information is no different, except that, maybe, it’s a little darker, a little more wistful, a little wiser, as in these lines from “A Baby in the Piazza”:

and the Italian Renaissance? Not a whole lot, I think to myself

as I cross the piazza after a night of drinking with friends,

and suddenly a wolf tears past, the moon rises and sets

and rises again, clouds race across the sky, vines snake of trees,

temple columns, the legs of passersby as the fog rolls over

the low wall that separates the river from the city, down

the galleries and alleyways until it covers the cars, the buildings,

the people who feel as though they’ve been blindfolded

and spun about in a children’s game, and there’s a long silence,

Help Me does have a lot of the familiar Kirby fare: the pop culture moments and figures, the stream of consciousness questioning of everything, and, thrown in somewhere, a lovely love poem lacking all presumptuousness, faux or real. Here are a few lines of one such poem titled “With You I Am Myself”:

“I am missing you which is probably why I am thinking

of that wonderful Frank O’Hara poem ‘Having a Coke

a t-shirt that says Avec toi je suis moi, or at least I guess

she’s French, although why she couldn’t be someone

of another nationality who just happens to have a French

t-shirt is hardly out of the question, and, indeed, she could

be someone who doesn’t know what her t-shirt says at all,

just the way people get a Chinese tattoo that they think

simply for its color, which is a charming green, but my

next thought is that, yes, With you I am myself makes

perfectly good sense in that the right person makes you

feel as though you’ve just been handed a certificate that

authorizes you to be your ideal self, someone who is adorable

and mesmerizing and always bubbling over with life and ideas . . .”

And then there is what should be familiar to fans of Kirby, but never really is, and that is his management of language. All through and around and under his suffusing of pop culture motes, and the tweets of news and tragedy in minute precision (Kirby was a journalist in a prior life), and the timing of small moments, and the long, seemingly endless necklace of beads that is his style of stream of consciousness, and his storytelling, and his characters . . . surrounding all that is language that somersaults, and faints, and crouches in corners in order to leap at you at just the right moment. To make you laugh out loud, or cry, or laugh and then cry. Check out these lines from “This Magic Moment”:

“Poetry does make things happen. A friend says, ‘I wanted

to let you know that my stepfather is chattering like

a schoolboy about a poem of yours on my Facebook page.

This may not seem like much to you, but this guy has been

giving me a hard time since I was two. You built a bridge

between people who never understood each other before.’

How’d that happen? Magic, that’s how. I know the poem

she means; it took me years to write it.”

Kirby’s is an ode of a career to the power of words. To poetry. To humans. With Help Me, Information, Kirby has created a book that is also a lit picture window into a world that looks a lot like this one, but is infinitely kinder, more gentle, more full of awe and wonder and love for all things people, and the words by which they try to continue living.