Help!: The Beatles, Duke Ellington, and the Magic of Collaboration 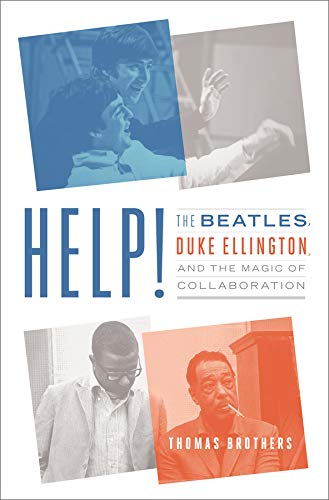 Author Thomas Brothers tries mightily in this dense but insightful book to tie his thesis together, namely that two of the biggest musical geniuses of the 20th Century—Duke Ellington and The Beatles—succeeded so well because they shared the common gene of collaboration. And while that may be somewhat true, their way of working within music was so vastly different that it doesn’t seem to make much sense to link these musical forces together.

Brothers, who has written previously about Louis Armstrong, points out that Ellington was not a composer but rather a master arranger. He leaned on two masterful songwriters, Bubber Miley and later Billy Stayhorn (who actually wrote “Take the A Train”).

On the other hand, Lennon & McCartney (and later George Harrison) were primarily composers. They leaned on each other for collaboration but their partnership seems a different animal than the way Ellington operated. He recognized talent and brought people together. It feels like in this telling that Ellington had more in common with Beatles producer George Martin than with the boys themselves. But, as Brothers points out, both Ellington and the Beatles drew on and popularized the “African-American musical vernacular.”

Help! is very much two almost distinct books. The first half is all Ellington and the second all Beatles. Both are very good and instructive about their respective subjects but, depending on your musical tastes, you could surely skip one and delve into the other.

The second half of the book about the Beatles is a worthy successor to Revolution in the Head, one of the first in a parade of books that took the Beatles music extremely seriously.

Brothers, not surprisingly a professor of music at Duke University, puts his intellectual spin on Beatles material pulled from a variety of sources. He outlines what he believes they were doing in a way one suspects that Lennon & McCartney never fathomed.

Take the song “Tomorrow Never Knows,” a psychedelic frenzy of backward sounds, tape loops, exploding drums and Lennon’s voice soaring above in an eerie screed commanding us all to tune in and drop out. At the time it was released, no one had heard anything like it.

That song, as conceived by Lennon, was built around a single chord with lyrics cribbed from Timothy Leary. As Brothers writes, “McCartney remembers his partner singing his new song while ‘rather earnestly strumming in C major’ on his acoustic guitar. He wondered to himself what Martin was going to think.”

McCartney—the most musically advanced of any Beatle—knew what to do and he succeeded with collaborative help of the other Beatles, George Martin and engineer Goeff Emerick. It was a teenage Emerick’s first day in the studio as an intern for George Martin and this was dropped in his lap. (Emerick sadly died recently but he left us his own great book on Beatles music: Here, There and Everywhere.) He rose to the challenge, running Lennon’s voice through Leslie speakers to fulfil the songwriter’s command that his voice should sound like like he was the Dali Lama speaking from a mountaintop.

McCartney, Harrison and Starr added their own musical touches to make the song what it became. “McCartney,” Brothers writes, “was good at taking songs from Lennon and making them musically better, but this challenge had no precedent.”

But sometimes, it was McCartney who needed the help of others, as Brothers demonstrates with Eleanor Rigby: “Everything was integrated in spite of the fact that at least six people helped create the words, music, and arrangement.”

In retrospect, it seems odd that only Lennon & McCartney were the only ones listed as co-writers, given the large contributions of the others. “Starr came up with the poignant images of the preacher writing a sermon not to be heard by anyone and darning his socks in isolation. Pete Shotton, Lennon’s friend since childhood, solved the problem of how to end the song: have the two lonely principles come together through Eleanor Rigby’s death and burial by Father McKenzie. Harrison contributed the hook, the cry for the lonely people.”

The song is very dark and very serious and it was a first for The Beatles. Brothers tells us: “Against all odds, this powerful synthesis of music and words drove the song all the way to the top of the pop charts.”

Brothers takes us through each of the Beatles LPs in a way that any Beatles geek will love and he does the best job this reviewer has read of explaining the thematic structure of the Sgt. Pepper’s album. “Lennon,” Brothers writes, “later complained that the songs are not topically unified, but that apparent lack is actually part of the magic. The concept is loose enough to allow an array of music so diverse that it mimics the glorious chaos of life itself. The implicit theme is the psychedelic worldview, which could be summed up most simply as nothing is real.”

This book makes you feel good once again about being a Beatles fan and makes a good case for unabashedly stating that it is possible this most celebrated band is actually underrated. And the same could be said of Ellington whose status continues to grow. Not bad for a guy born in 1899.