Helmi's Shadow: A Journey of Survival From Russia to East Asia to the American West 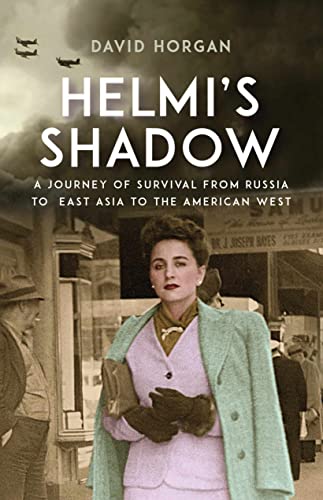 Helmi was born in Japan in 1923, raised by her mother in Shanghai, China, then returned to Kobe, Japan, where they lived until the end of World War II.

Both Helmi and her mother, Rachel, spoke Russian and English, as Rachel, Jewish, was born in Odessa before the turn of the century. Writes Horgan, “They had no citizenship anywhere. They had no true home.”

The pogroms in Russia drove Rachel’s family to Harbin China in 1906, seeking a temporary respite from fear. They lived in Harbin in comfort for at least 20 years. At 25 Rachel met an older man from Finland, Edward Koskin, and followed him to Kobe.

At 27 she had a daughter, Helmi—though Rachel and Edward weren’t married. Helmi was a child without citizenship—Japan didn’t grant citizenship to foreigners—and Russia also revoked Rachel’s citizenship, as with any Soviet living abroad. When Helmi was three, mother and daughter returned to Harbin; however, a year later—due to chaos there—they left for Shanghai, where Rachel’s sister and niece were living. Seventy-five years later, Helmi dubbed it a “slum,” with no indoor plumbing. They used chamber pots, called “honey pots.”

Rachel had foresight to make sure Helmi, who started school at nine, was fluent in English and several other languages.

Rachel met a German man and left with him for Japan, leaving Helmi with relatives in Shanghai. At 14, Helmi was happy to stay in school and not be uprooted. However, violence between Japanese and Chinese forced Helmi to move with family in a “safer” part of Shanghai in 1937. She finished high school at 16 in an accelerated program.

Seeing an ad of the “Chesterfield Girl,” Helmi began to dream of the U.S.A. “She wanted to feel as carefree and fanciful as that girl on the billboard.” Though offered an American college scholarship at 16, Helmi felt compelled to return to Kobe to help her mother.

During the war, Rachel was forced to house Nazis. Helmi’s fluency in German was an asset. No one knew they were Jewish. Food was scarce—constant bombings—then it was all over in 1945.

After the war, American soldiers had missions in Japan, and the ladies befriended a few. With Helmi’s language abilities, they hired her to help count foreigners living in Japan. In 1946, Helmi obtained a visa for travel to San Francisco.

Helmi got a secretarial job and was invited to Reno by a soldier she knew in Japan, Bill Horgan, who was now a lawyer. They were married in 1947; Helmi (Jewish, non-religious) and Bill (Catholic, religious). The author’s brother, Terence, was born in 1948.

Rachel was brought to the U.S.A. to help with the baby. Helmi, who became a U.S. citizen in 1949, did have concerns with Rachel who was always high-strung; but she bore the responsibility “formed in the crucible of poverty and fused in the fire of war.” Rachel also became a citizen.

Helmi was introduced to community theater and won a best actress award. The author, David, was born in 1951. Coincidentally, their neighbor was the same “Chesterfield Girl” Helmi saw on the Shanghai billboard in 1939!

Baba (Rachel) suffered night terrors from her past and was eventually hospitalized: “Baba’s terrified outlook, nutty as it appears to us, might have a rational basis . . .”

Helmi’s husband, Bill, died of stomach cancer when the brothers were teens. After a few years, Helmi married Jack. Baba, who began to suffer from dementia, died in 1991.

The author convinced Helmi, at 75, to do a video recording of her life. Though reluctant, with community theater experience she aced it. Helmi suffered a stroke and died in 2002.

After a year of mourning, the author felt “that if her story were ever going to be told, it would have to be told by me.” And what a story it is!

Written by Helmi’s younger son, Helmi’s Shadow is an absolute candy fix for politophiles and historophiles. There are lovely flashbacks of author and Baba Rachel’s 1950s jaunts to Reno’s Woolworth’s; “Then she paid with silver dollars from her big black purse, and we walked . . . to the river with our breadcrumbs to spread for the ducks . . .”