Helltown: The Untold Story of a Serial Killer on Cape Cod 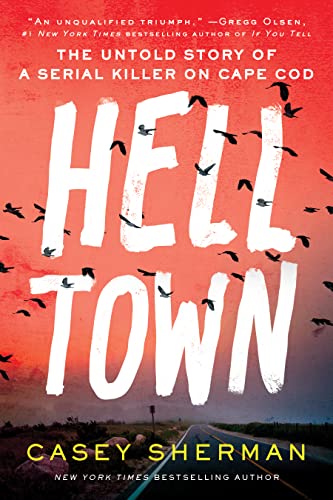 Casey Sherman has had enormous commercial success as an author. Several of his books have been adapted by Hollywood, with others about the manhunt for Whitey Bulger and the last days of John Lennon now in film production. His latest true crime saga, Helltown: The Untold Story of a Serial Killer on Cape Cod, is headed for TV screens.

That said, Sherman is not a true-crime writer, despite his publisher’s packaging of Helltown, the gruesome story of a 1960s serial killer in Provincetown, MA. His book is a concoction of fact and fiction, filled with invented dialogue, reflecting his belief (as expressed in an author’s note) that a work of fact can benefit from “elements of fiction storytelling.”

His subject is Tony Costa, a drug-addled, high-IQ 24-year-old and pied piper of Provincetown hippies (they called him “Sire”), who in 1969 was tried and convicted for killing and raping (in that order) two young women whose bodies he mutilated and buried in the woods of North Truro. Costa was sentenced to life in prison, where he committed suicide.

The women were decapitated, their hearts and other parts removed. There were other victims. In each case, Sherman writes, the split-personality killer’s evil alter ego, Cory, told Costa to commit the crimes. In fact, Sherman presents their invented internal dialogue, time and again, in all its preposterous and stilted glory.

It’s enough to make veteran true crime readers flinch. How it will be represented in the forthcoming television series is an issue best left to Robert Downey, Jr.’s production company.

A native of Somerville, a city north of Boston, Costa grew up with a fascination for taxidermy. He killed neighborhood pigeons and squirrels, then moved on to household pets. He was never without his copy of Maynard’s Manual of Taxidermy, whose tips on skinning animals he relied on in mutilating his human victims.

Sherman manages to squeeze in the Charles Manson murders as well as the Ted Kennedy Chappaquiddick incident, both of little relevance but great for goosing up Helltown.

For much of the book, he recounts extensively the almost totally irrelevant rivalry between two famous authors with homes in Cape Cod: Norman Mailer and Kurt Vonnegut Jr. Mailer was an established author (The Naked and the Dead, 1948); Vonnegut, a financially strapped Saab dealer with five kids, was an out-of-print science fiction writer who was then getting rejections from the New Yorker and other top magazines while working on his breakout novel Slaughterhouse-Five (1969).

For both authors, Costa’s murderous rampage was local news: the killings occurred “within miles” of Mailer’s Commercial Street home and less than 40 miles from Vonnegut’s home. Both were fascinated by the murders, and Vonnegut’s teenage daughter knew Costa, though she was not nearly as close to the killer as Vonnegut claimed to Life magazine to land an article assignment about the case.

Vonnegut was not the only person playing loose with the facts. The Cape Cod district attorney prosecuting Costa exaggerated the most horrifying aspects of the case in talking to reporters, reasoning “facts be damned,” writes Sherman.

Sherman details the Mailer-Vonnegut story, recalling Mailer’s moviemaking and run for the New York City mayoralty in the period and Vonnegut’s newfound celebrity upon publication of the best-selling Slaughterhouse-Five.

The rivalry, an interesting literary footnote, has almost nothing to do with the subject of the book.

A lackluster disappointment, then, that will leave many true-crime readers yearning for “Just the facts, Ma’am.”