Hello Darkness, My Old Friend: How Daring Dreams and Unyielding Friendship Turned One Man's Blindness into an Extraordinary Vision for Life 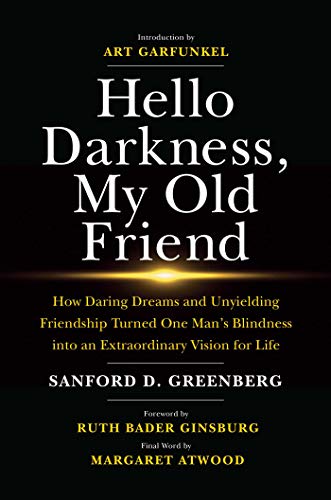 “I felt as if I were in an enormous shadowy cavern, a void empty of anything or any sensation.”

While a junior at Columbia University in New York City, Sanford Greenberg began to have vision problems. On a train ride home to Buffalo, “I felt as if I were in an enormous shadowy cavern, a void empty of anything or any sensation.”

Greenberg lived, the eldest of three children, in Buffalo’s poorest neighborhood during the 1940s. His father died suddenly when Greenberg was five.

When he was ten, his mother remarried, to her late husband’s brother Carl, who went from uncle to stepdad to the young family. His mom had a fourth child, a daughter.

Carl was a junk dealer who moved the family to a house in a better neighborhood in Buffalo. In sixth grade, Sanford met Sue, the gal who would become his wife.

After graduating high school with many accolades, he went on to Columbia, where he majored in American history.

Fidel Castro once visited his campus in 1959, and his sociology professor arranged an introduction. Greenberg met Art Garfunkel after only a month at Columbia.

Garfunkel and Greenberg became close friends during freshman year. By sophomore year they were roomies and enjoyed highbrow discussions. “I would like you to give me the reasons why the sky is blue . . . and they have to be convincing ones.”

Greenberg visited the Garfunkel home one weekend and was introduced to Garfunkel’s friend who lived “around the corner” in Queens. That friend was Paul Simon.

During his junior year, Garfunkel noticed Greenberg was having difficulty seeing but Sanford was too busy with the Kennedy campaign to pay attention. Eventually a doctor prescribed a corticosteroid.

Unable to see, and therefore complete his final exams, he left for Buffalo. After being hospitalized, Greenberg was diagnosed with glaucoma, most likely caused by the steroid the first doctor thought would help.

Despite seeing a specialist in Detroit, the doctor told him, “Well, son, you are going to be blind tomorrow.” His Buffalo girlfriend Sue tried to cheer him.

A social worker implied his destiny was to be either a justice of the peace or to make screwdrivers, none of which interested Greenberg. Determined for a greater life, he felt, “Seeds want to sprout and send out roots.”

Garfunkel offered to help Greenberg return to Columbia. “We can figure something out,” suggested Garfunkel. Garfunkel was true to his word and helped Greenberg hundreds of times over the years, as did Greenberg help Garfunkel.

Greenberg returned to Columbia and began a new normal, with fervor, of listening to tapes read by friends and volunteers from institutions for the blind, leaving little time for meals and studying from morning to late night.

While Greenberg was a senior at Columbia, the New York Times published an article about him. He was reluctant to publicize his blindness, though it addressed his academic successes. “If over the years I achieve something significant . . . then I might deserve some praise.”

He was elected to Phi Beta Kappa his senior year at Columbia and was accepted to Harvard’s graduate program.

Greenberg married Sue in August 1962, and Garfunkel sang at their wedding. The couple moved to Cambridge to begin his graduate studies, while Sue worked at a school for special-needs children.

He won a Marshall Scholarship at Oxford in England. After obtaining his Ph.D. (after many bloody headwounds from stumbles), Greenberg gave Garfunkel $400 because he wanted to leave architecture and record with Paul Simon.

With his doctorate, Greenberg applied to Harvard for a law degree; however, after accepting a one-year post at the White House, requiring world travel, he never returned to law school.

Greenberg opened a technology company, and in 1971, his stepdad died in a work-related accident.

He and his wife soon had two sons, Paul, and Jimmy, followed shortly by a daughter, Kathryn. Lovely summers in Maine. A full chapter is devoted to verbal snapshots of endearing milestones for the Greenberg family.

In the ’80s there was a memorable road trip throughout the western United States with his two sons and Garfunkel, philosophical discussions abounding. “Who do we know who’s had a peaceful, fulfilling latter part of life? Milton, perhaps.”

Toward the end, Greenberg provides a balance sheet on his blindness in which assets far outweigh his liabilities. “Learning gives me a sensation of adding light to the darkness.”

A final chapter recounts an imaginary party, with all of Greenberg’s heroes and friends throughout history as revered guests. Greenberg and his wife have created the $3 million End Blindness by 2020 Prize.

With a Foreword by Ruth Bader Ginsburg, Introduction by Art Garfunkel, and Final Word by Margaret Atwood, Hello Darkness My Old Friend is an enlightening read by a witty, appreciative, and accomplished Sanford Greenberg, who opens the reader’s eyes to how to truly live life, sightless.