Hell Before Breakfast: America's First War Correspondents Making History and Headlines, from the Battlefields of the Civil War to the Far Reaches of the Ottoman Empire 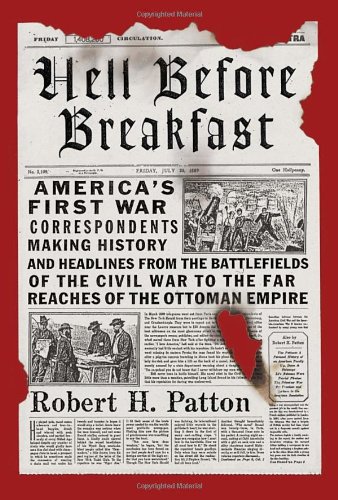 “The Hollywood stereotype of the 19th century war correspondent, or any newspaperman of that period, was a young single white male with a penchant for alcohol and a dream of writing the great book.”

The Hollywood stereotype of the 19th century war correspondent, or any newspaperman of that period, was a young single white male with a penchant for alcohol and a dream of writing the great book.

That image is sometimes not that far from the truth but from such men as Englishman William Howard Russell of the London Times (never an American), who in 1854 became the first official war correspondent, did come such great writers as Rudyard Kipling, Stephen Crane, and Winston Churchill. Alfred Tennyson's poem, “The Charge of the Light Brigade,” for example, was inspired by Russell's graphic prose. The popular use of the elephant and donkey as American political symbols came from a false report in the New York Herald of animals escaping from the Central Park zoo.

Traditional advice has it that to write you have to experience life to write, certainly these men had that. By the time such stories appeared in print, they teamed with gore and thrills, blood tourism from the comfort of an easy chair. Often the columns were later gathered up and published in edited books that, aside from compelling reading, became popular historical classics of the last faraway exotic places and romantic adventures.

The reporting also affected public opinion (and vice versa) far beyond that of the modern reporter embedded in the military. The reports from the Crimean War brought down the British government while documenting that the peace had resolved none of the tensions in the Balkans that historians would document as directly leading to World War I. and writing from the fall of the Paris Commune won the sympathy of the public that read newspapers with its defenders.

The growing numbers of papers became desperate for new adventures to grab headlines. Editors and personal problems plagued reporters. Public reaction to news reports during the Civil war could cost newspapermen their jobs. They also had to work in such dangerous conditions.

Of the more than 80 reporters who set out to cover the horrific but now forgotten slaughter in the Turkish-Russian War (1877–1878) in Bulgaria soon were only the illustrator-writer Frank Millett and the correspondent J. A. MacGahan remained.

The war correspondent came into being just before the first transatlantic cable made news between Europe and America almost instantaneous, cumulating in the eruption of Krakatoa in 1883 proving the world had near instant information access although Charles Dickens described it as reporting from the field with the economy of no adjectives, adverbs, or other color.

The author tells this story with readability and color that would have made a newspaperman of that era proud. Someone should suggest this book to Ken Burns for a documentary.

Although the prose is awkward at times, the story telling is engrossing, such as J. A. MacGahan’s reporting on the mass murder and systematic gang rape in Bulgaria in 1876, more than a century before the world was shocked by similar reports from the modern Balkans.

The convoluted and misleading title of this book does not adequately describe its content. Patton includes much about the great New York editors of the time, Horace Greeley; the father and son James Gordon Bennett; and John Russell Young, among others. They were incredible characters, often more "with a screw loose," as P. T. Barnum put it, than their reporters. Abraham Lincoln waged a private war with these editors and publishers even as he struggled to win the military conflict with the Confederate States of America.

That aspect of the story of the war correspondents, and the field reporting of the Civil War, deserve more space in this book. Where Mark Twain and Henry Mortimer Stanley appear in this work, they are name dropping, not war correspondents.