Hell and Back: A Longmire Mystery 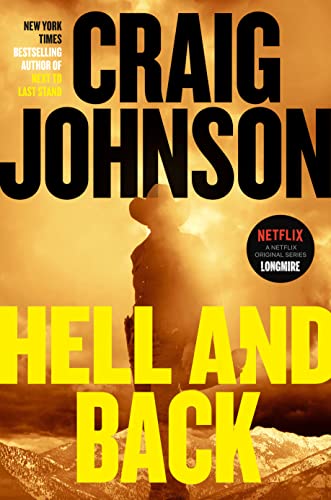 “Hell and Back is a story that challenges Longmire fans to step out of their comfort zone and consider their favorite hero from a new and otherworldy perspective.”

Absaroka County Sheriff Walt Longmire is a battle-tested veteran of the long-standing struggle between good and evil. His stoic pursuit of justice has seen him shot, stabbed, concussed, and otherwise beaten throughout the course of his career. This time, however, it’s worse than ever.

In Hell and Back, the 18th adventure in Craig Johnson’s highly successful series, Walt wakes up on an icy street in the middle of a snowstorm with no idea who he is or how he got there. The town, Fort Pratt, Montana, is ghostly and ill-defined, and the few people there all seem vaguely familiar to him.

As he wanders around, struggling to regain scraps of memory, he blunders through a portal into the late 19th century. Here he becomes witness to one of the more infamous incidents involving residential boarding schools for Native children, when 31 boys burned to death in a suspicious fire.

Always a tenacious problem-solver and agent of justice, Walt finds himself lamenting that “Maybe that was the true hell of things: to be an unwilling witness to events but to be unable to stop them.”

Hell and Back continues the storyline of Johnson’s previous novel, Daughter of the Morning Star (2021), and it will help to have read Daughter first before taking on this one. Walt’s search for Jeanie One Moon, the missing Native girl whose disappearance was brought to his attention while he was searching for her sister, Jaya Long, has now somehow conveyed him to this ghostly town.

Furthermore, the handful of people Walt meets in Fort Pratt either preceded him here from Daughter or were known to him in previous adventures. Familiarity with the series as a whole and the various characters Walt has dealt with (or killed) while executing his duties as sheriff will greatly assist in an appreciation of the current tale.

The other matter that must be considered in this story is the otherworldly, supernatural dimension of its plot and setting. It’s popular these days for established crime fiction authors to explore the supernatural in a new work. James Lee Burke immediately comes to mind with his recent Holland family novel Every Cloak Rolled in Blood (2022), which also focuses on 19th century Native injustice with a supernatural twist.

One of the key features of the Longmire series is the author’s constant invocation of Native mysticism. In Daughter, this element came to forefront in the apparition of the lost Jeanie One Moon, red scarves and other strange tokens that appear and disappear, and most importantly the legend of the Éveohtsé-heómése, “the Wandering Without, the Taker of Souls that waits in the wilderness.”

The author carries this legend forward into Hell and Back in a full-court press that gives readers nowhere else to go. So why has Johnson taken such a risk with his (our) beloved Walt Longmire?

The author states in the Acknowledgments section preceding the story that he has attempted to create “a Western, gothic romance with tinges of horror.”

Gothic romance is a literary genre that had its genesis in Horace Walpole’s gothic novel The Castle of Otranto (1764), a horror story that takes place in a haunted castle.

Almost a century later, it was Nathaniel Hawthorne, in his Preface to The House of the Seven Gables (1851), who differentiated between novels, which attempt a level of realism with complicated characters, and romances, which have a markedly allegorical dimension, simplified characters, and non-realistic events.

Johnson’s experiment here is to insert a realistic, complicated protagonist into a distinctly non-realistic, gothic setting. It allows him to explore the difficulties experienced by a conflicted man of high morals (Walt) when forced to deal with “phantoms of regret and loss.” The story’s leitmotif is “all haunting is regret,” and there’s no doubt Walt’s primary challenge is to work through his deep sense of regret and loss when faced with the ghosts of his past.

Whether or not this book is ultimately successful depends on the patience and interest of Johnson’s faithful readers. If they allow him the latitude to convey Walt Longmire out of the familiar and beautiful setting of Absaroka County into this ghostly and mysterious small town, then the author’s experiment will have succeeded.

Hell and Back is a story that challenges Longmire fans to step out of their comfort zone and consider their favorite hero from a new and otherworldy perspective.