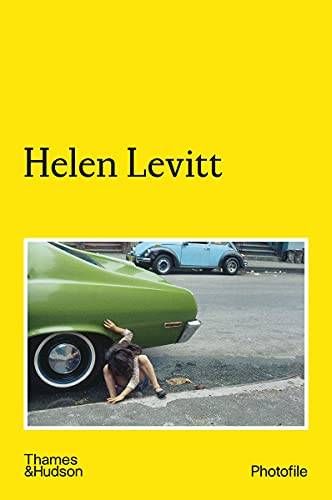 “These masterworks by Levitt have cemented her reputation in the archives of major museums around the world and on the walls of serious collectors of photography.”

The Photofile collection is the English language edition of the popular Photo Poche series which was first published by the Centre National de la Photographie in Paris. This book, the 14th in the series, addresses the enormous contribution of Helen Levitt (1913–2009) to the world of photography in the typical small and affordable paperback format of the Photofile brand.

Helen Levitt hits the mark with a thorough introductory essay by Jean-François Chevrier, a renowned French art historian, curator, and critic. Chevrier’s essay, “Helen Levitt: A Game of Bodies,” provides a brief yet comprehensive introduction to Levitt’s work that places Levitt firmly in the pantheon of great American photographers. Chevrier provides an insightful framework to view the many illustrations that follow, including examples of Levitt’s rarely seen color imagery.

Helen Levitt’s oeuvre is an important link between the masters Henri Cartier-Bresson and Walker Evans and a current generation of photographers, including Garry Winogrand and Lee Friedlander, who continue to see the pace and the pathos of the urban street as a rich vein of imagery to record. Levitt acknowledged her debt to Bresson and Evans, whom she met and from whom she received training. Bresson and Evans pioneered and established the credentials of meaningful black-and-white street photography as an art to be taken seriously by museums, curators, and collectors.

Levitt’s work however is a much more feminine and wistful look at the streets of New York City, which is the work for which she is particularly celebrated. Although she never had children, she found the children playing in the streets of New York City to be inspiring and artistically nurturing. She roamed the poorest neighborhoods of the Lower East Side, Spanish Harlem, and Brooklyn with the new portable 35mm Leica camera which enabled her to make quick observations and to surreptiously and spontaneously record her subjects and their environment. She never sought commercial validation in photography but was content to practice an art that took dedication and a commitment to the visual image that became her substitute for financial success.

Levitt was educated in the arts and was an avid museum goer, so her work was not done in isolation like some of her contemporaries such as the newly-discovered photography of Vivian Maier (1926–2009), among others. She was highly connected to the art world. She had connections to the Photo League and shared many of its political sympathies.

But Levitt was also a rugged individualist who charted her own path and displayed her empathy for the human condition through a respectful depiction of the rituals and drama of the street. Her finest work was done before her first exhibition at the Museum of Modern Art in New York in 1943. It wasn’t until 1965 when the much-delayed publication of her book, A Way of Seeing, emerged that Levitt’s work was finally celebrated for its uniqueness and its perspicacity. Done in collaboration with James Agee, A Way of Seeing brought Levitt wide recognition and respect.

Although she photographed in the same era as Berenice Abbott (1898–1991), Levitt displayed none of Abbott’s cool and calm depiction of architecture and the changing city. Levitt was much more a lyricist. Her subjects, primarily children, dance and pivot; they play and they pose. The children’s games and their primitive costumes are often sweet, narrative, and amusing.

But mostly, the people who populate her most celebrated photographs are full of life and ambition. Their lives are played out in tender rituals of movement and laughter that capture and put their dreams on display. Whether their dreams will be realized and their life experiences will enable them to escape the traps of poverty and their neighborhoods is a lingering question that the photographs convey to the viewer.

Helen Levitt also includes nine photographs from one of her few trips outside of New York City to Mexico City in 1941. These pictures could easily have been omitted by the publisher and the concentration of the book rest fully-centered on New York City. The Mexico City images are more political and dark; they lack Levitt’s joyfulness in discovery. On the other hand, her color work in New York City, which is included, is revelatory. This color photography is a rarely acknowledged side of Levitt’s legacy and process.

However, it is the black-and-white work on the streets of New York City, for which Levitt is best known, that is the highlight of the book and her art. These masterworks by Levitt have cemented her reputation in the archives of major museums around the world and on the walls of serious collectors of photography.