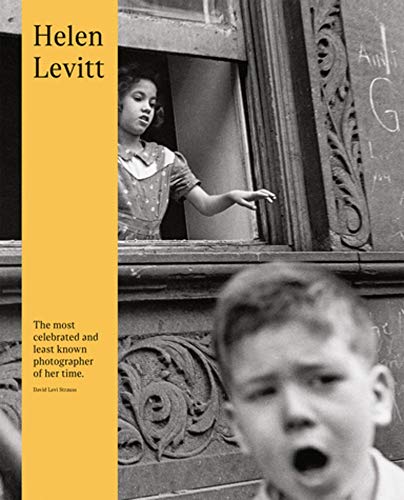 “Helen Levitt is a remarkable book, and a substantial addition to the library of anyone who values the beginnings of street photography.“

Interestingly, while Levitt acknowledged Cartier-Bresson’s influence—and even joined him for a day of shooting—a clear difference was that Levitt printed her own black and white photographs in the darkroom instead of relying on a master printer as Cartier-Bresson did, and it shows in her emphasis. She was a master of composition, cropping, dodge and burn, and taught herself composition by looking at paintings in museums.

Helen Levitt worked in 35mm with an early Leica camera that facilitated her approach to photography, which is marked by spontaneity and connecting with people. She was fascinated by people in their milieu and adept at capturing the unguarded expressions of her subjects.

In contrast to photographers like Vivian Maier who snapped people surreptitiously, Levitt was not fazed by the unwelcome looks she received as she photographed people on the streets. She intuitively understood human nature and that for people on the streets, the sidewalk was a stage to present themselves; it was where they were on display, acting out the facade they wished to present to others.

Despite the facade, there is an honesty in her street portraits that is riveting. Her “informal” portraits of people and families on the stoops of their tenement dwellings are stunning in their unvarnished, raw energy. Her contact print of film negatives as reproduced in the book show that Levitt took multiple portrait shots, shifting her position or asking her subjects to move, in order to capture her favored image.

At times, how people presented themselves or how children interacted with each other took on a surreal aspect, especially to an acute observer like Levitt. Children often act in primal ways, and she was intuitively intrigued by the way they presented themselves. Her preoccupation with children’s play and behavior may be attributable in part to never having been married or experienced motherhood.

Levitt had been an avid movie-goer in her youth, and her love for cinema and silent films with its emphasis on gestural expression definitely influenced her still photography. In the book’s essay, Role-Play, Techniques of the Body, Silent Film Gestures by editor Walter Moser, he states “Levitt prioritized gesticulations over all pictorial elements . . . The tendency toward the gestural in Levitt’s photography can be associated with the broad reappraisal of silent film, and slapstick film in particular.” Charles Chaplin was her favorite actor, and her affinity for film is visible in her photography.

Writers often go by the dictum “write what you know;” in Levitt’s case it was unspoken: photograph what you know. Having grown up in Brooklyn, Levitt was a New Yorker who was thoroughly familiar with the urban behavior of people on the street and understood the urban landscape, its ethos, and their social interactions.

Her black and white images of people in East Harlem and the Garment District of New York from the 1930s through the 1940s, are priceless in the way they capture the culture of that time in those neighborhoods. However, her black and white photos exhibit a richness of tone that is missing when Levitt began photographing in color in the 1960s and 70s. Levitt’s emphasis is always on the person or people, and color often adds a softening, distracting influence to her photos that digresses from the main thrust, the harsh edge, of the image.

This book’s layout usually avoids splitting key parts of an image across the gutter in a two-page spread, thereby minimizing its impact. Kudos to the book designer. The paper weight is excellent and although there are 34 color images reproduced they do not have the luxurious richness of tones as the 200 black and white images reproduced, which are outstanding.

Helen Levitt is a remarkable book, and a substantial addition to the library of anyone who values the beginnings of street photography.