Heirs of an Honored Name: The Decline of the Adams Family and the Rise of Modern America 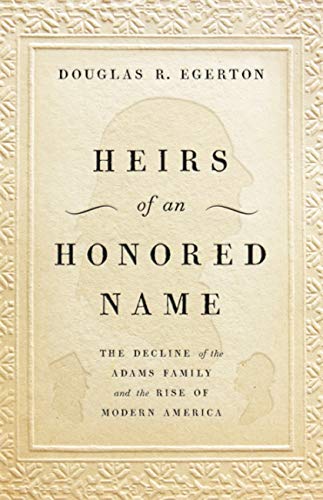 “Egerton’s book . . . is a fascinating tale of public success combined with private turmoil and tragedy, not unlike other American political dynasties such as the Roosevelts, Kennedys, and Rockefellers.”

The Adamses of Massachusetts were America’s first political dynasty. John Adams was a Founding Father, diplomat, vice president, and president. His son John Quincy Adams served as a diplomat, Secretary of State, president, and congressman. Their heirs did not attain equal political success, but their achievements in diplomacy, war, journalism, and business were substantial.

Le Moyne history professor Douglas Egerton in his new book Heirs of an Honored Name details the achievements of the succeeding generation of Adamses, but sees only decline because, he writes, they “preferred the political culture of an earlier age, in which every man knew his place and women remained silent.”

Egerton views the children and grandchildren of John Quincy Adams through the lens of progressivism. It is a distorting view. It projects modern values—racial equality and equal rights for women—onto a historical era that was mostly inhospitable to such values.

Egerton’s book focuses on the lives and careers of Charles Francis Adams, Sr. and his male children—Charles Francis, Jr, John Quincy II, Henry, and Brooks. It is a fascinating tale of public success combined with private turmoil and tragedy, not unlike other American political dynasties such as the Roosevelts, Kennedys, and Rockefellers.

Egerton calls Charles Francis Adams, Sr. “for a time the last honorable Adams.” Honorable, in Egerton’s terms, is equated to being “liberal-minded” on race. Charles Francis Sr. was an abolitionist, but like future President Abraham Lincoln, not militant about it. He believed, writes Egerton, “that the Constitution protected slavery from federal interference.”

As an Adams, Charles Francis Sr. was expected to enter public life—and at the highest levels. He became a leader of the “free-soil movement.” In 1848, he was the Free Soil Party’s candidate for vice president on a ticket headed by former President Martin Van Buren. Although the ticket failed to carry a single state, Charles Francis Sr. “was now recognized as one of the nation’s leading antislavery voices.”

Charles Francis Sr. served in Congress as the nation edged toward civil war, but his greatest service to his country came during the war, when he served as U.S. Minister to Great Britain, a post previously held by both his father and grandfather. Egerton notes the personal qualities that made Charles Francis Sr. a near perfect diplomat: “his cold, controlled nature; his private and bookish personality; and his determination to uphold the family’s name and memory.”

The U.S. Minister to Britain had one overriding task—to prevent British recognition of the Confederacy as an independent power. Charles Francis Sr. understood that military developments in America and domestic public opinion in Britain were the determining factors, but he also recognized the necessity of developing good personal relations with key British leaders.

Charles Francis Sr. succeeded brilliantly in guiding the Lincoln administration through the Trent affair and British efforts to provide warships to the Confederacy, either of which could have resulted in war between the United States and Britain. Minister Adams once explained to a colleague that his sole object was to prevent differences between the two countries “from maturing into an open quarrel.”

During the war, Charles Francis Jr. served in the Union cavalry, seeing limited action at Gettysburg, Culpeper Court House, Petersburg, and lesser battles. He was present for the capture of Richmond. He had commanded black troops toward the end of the war. After the war, Charles Francis Jr. practiced law, wrote articles for prominent publications, and became a railroad executive.

John Quincy Adams II became a state legislator and ran unsuccessfully for governor. Henry Adams had a successful career as an educator and a writer. Brooks Adams wrote books on history and international relations and informally advised President Theodore Roosevelt.

It is clear that Charles Francis Sr. and his sons shared the view—commonplace at that time—that blacks were intellectually and socially inferior to whites, especially well-educated whites like the Adamses. They were also politically opposed to Reconstruction, which made them popular with southern politicians and believers in the “lost cause” of the Confederacy.

As abhorrent as those views were, Egerton places too much emphasis on them in passing judgment on the heirs of John and John Quincy Adams. On the issue of racial equality, they were a product of their times. George Washington and Thomas Jefferson owned and sold slaves, but their achievements remain admirable.