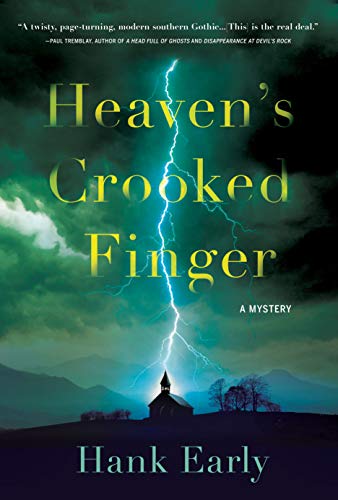 “Heaven’s Crooked Finger is an outstanding work of literary suspense, a tale as devastatingly beautiful as it is powerfully intelligent.”

There’s a new name in the mystery fiction scene, and that name is Hank Early. And with his debut novel Heaven’s Crooked Finger, he is quickly turning heads and garnering much-deserved attention and acclaim.

Heaven’s Crooked Finger is the narrative of Earl Marcus, a private detective.  A childhood survivor of the abusive evangelical ways of his father, Reverend RJ Marcus, Earl has had his share of challenges and conflicts on the job. But nothing can prepare him for the letter that he receives which brings him back to his hometown of Coulee County, Georgia.

A sheriff’s deputy, Mary Hawkins, has contacted Earl to let him know that her grandmother, Arnette “Granny” Lacey (who also looked after Earl when he was younger) is on her deathbed, and that she would like to see him one last time. What’s more, Granny has recently received a letter for Earl—a letter containing a very recent photo of his long-dead father.

It’s not long after Earl arrives that the mystery quickly deepens. The man who sent the letter has gone missing. Several teenage girls have disappeared and returned with strange tattoos on their bodies. And there’s a rumor going around among the followers of the Church of the Holy Flame that RJ Marcus has come back from the dead.

Heaven’s Crooked Finger is a tight and involved mystery, full of twists and turns aplenty. There are many secrets and skeletons piled high in closets.  There are false leads and red herrings. And there are a number of enemies that Earl runs into—and makes—during the course of his investigation.

However, what sets this aside from other, similar works goes far beyond strong characterization or plotting. There is a powerful and profound mood to the novel, combining by turns loneliness, despair, and an ongoing striving for redemption that makes this tale as emotionally exhausting as it is intelligently plotted.

As a character, Earl Marcus is far from perfect, and yet so much more than a stereotypical tough guy with shortcomings. He’s headstrong and impulsive; in an early scene, Mary is horrified to learn that he burned the letter containing his father’s picture, simply because he “didn’t want to see it again,” even though it would have been a powerful piece of evidence in their investigation. Earl is prone to very human errors and oversights, and in addition to humanizing his actions, this helps bring very vulnerable and relatable qualities to his persona.

Family and religion play very important themes in this novel. Over a number of alternating flashbacks, we get glimpses into Earl’s life as he grew up under the reign of his father. There are many unpleasant scenes of child abuse in these flashbacks, which may prove to be difficult content for some readers. However, none of these are done exploitatively or too extensively—they convey many hurtful emotions that serve primarily to bolster and define the characters’ motivations.

With as much of an emphasis on pathos as there is on plot, Heaven’s Crooked Finger could have turned into an edgy but heavy-handed drama.  And conversely, it could have been boiled down to a solid mystery, yet lacking in the rich development that elevates the characters above traditional types and tropes. But Early keeps the pace swift and taut and the emotions high, perfectly balancing the novel’s numerous tensions.

There’s also a hefty dose of humor throughout the book. It’s never heavy-handed or distracting, nor is it sparingly sprinkled here and there. Once again, balance is the name of the game, for the jokes are perfectly placed and never too cheap or blunt, throwing some much-needed light upon the frequent darkness.

And finally, Early is a master of description. The dense, humid Georgia setting is powerfully atmospheric, full of smells and sounds, swaying trees, crunching leaves and gravel, and crashing thunder. Never does the reader forget where they are, and it makes this tale all the more vivid and engrossing.

Without spoiling anything of the plot, this novel is also the first book in a planned series. A sequel has already been announced, titled In the Valley of the Devil, due out in July of 2018. If that or any subsequent Earl Marcus mysteries are even half as good as this one, readers will be in for an ongoing number of treats.

Heaven’s Crooked Finger is an outstanding work of literary suspense, a tale as devastatingly beautiful as it is powerfully intelligent. Fans of a wide variety of fiction are in store for a remarkable read in this novel, which perfectly combines elements of Southern gothic literature and hard-boiled mystery. And with more tales to follow, this is the start of a new trail in mystery fiction—with Hank Early paving the way.