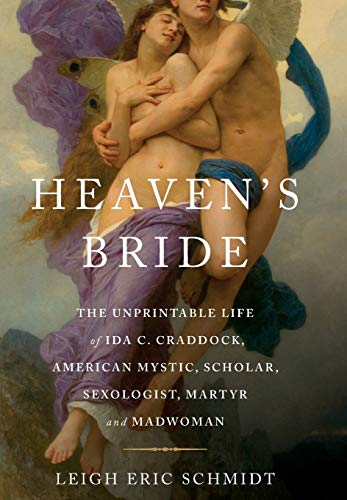 Had Ida C. Craddock not actually walked the streets of New York’s Greenwich Village in the latter part of the 19th and early part of the 20th century, she easily could have been the creation of a novelist’s pen. (E. L. Doctorow comes quickly to mind.)

She might have been given colorful friends like liberal radical Emma Goldman in order to enhance the narrative and, as God is in the details, she might well have been placed within the specific social, political and spiritual milieu of that very special, very odd moment in American history.

A time in which exploration and experimentation was in the air. A moment in which scientific discovery and political revolution battled staid Victorian morality, which had become faded like a grandmother’s dusty drapes in the sunlight, but still managed to keep a lavender-scented strangle-hold over Western culture.

It was a time in which censors still kept watch over what the eyes of the public could safely see and a time in which governments toppled as the Old World gave way to the new. Most strangely, it was a moment in which the curtain between this world and the next grew gossamer-thin. When the occult was suddenly everywhere, after two sisters from upstate New York in 1848 started a craze for table-tipping séances and the invention of the Ouija board lead to such journalistic accounts as, “The board seems to grow electric, and questions are answered, and advice and information given with head-swimming, brain-turning dispatch.”

Were a novelist to create a heroine to let lose in this world, he could do no better than Ida Craddock, whose true life is explored by the Harvard University History of Religion professor Leigh Eric Schmidt in Heaven’s Bride. With this life story, Schmidt has been handed the literary keys to the kingdom, with subject whose life is every bit as salacious and fascinating as his sub-title implies.

Sadly, as the reader dips in, he is reminded on page after page that the author of the book in hand is indeed an academic and not a novelist. It is, in the end, a case of Coulda, Woulda, Shoulda. What could have, would have and should have, in other hands, been a biography of the highest order—one that, like the bar-setter, Nancy Milford’s Zelda or the more recent biography of author, professor and tattoo artist Samuel Steward, Secret Historian by Justin Spring, entertains, enlightens and explains all at once—is instead a rather slow read.

The problem is one of timeline. Where another author might have chosen to begin either at the beginning or, in a more Hollywood manner, on the morning of October 10, 1902, a very important date, as we shall see, and then backtrack in order to set the stage for what is to come, Schmidt chooses instead to take all the various aspects of Craddock’s strange and wonderful life and put them in separate boxes.

And so we get a section of the book on Craddock the mystic and another on Craddock the sexologist. In structuring the book in this manner, Schmidt is forced to cover the same time periods again and again—the book roughly covers the years from 1890 until 1902—each time stressing one aspect of Craddock’s life.

The result is confusing, as the reader attempts of figure out if the trip to London in one section of the book is the same one that has been referred to again in another, previous section. In that Craddock, like the rest of us, lived a linear life, albeit one jam-packed with action, rebellion and some real borderline behavior, the lack of flow inhibits both the reader’s enjoyment and his understanding of the text.

Worse, the structure treats its subject Craddock rather simplistically, in that the fact that each of her activities and interests informed all the others is largely ignored. All aspects of her life were one in her living of them and need to be dealt with as such, both by writer and reader. Hers was, for better or worse, a complex persona. To try to set up a narrative in which her mysticism can exist outside of Craddock’s sexual rebellion is like to try and pretend that her heart and the lungs were not interdependent organs.

When you’re dealing with Ida Craddock, here’s what you get: a vocal advocate of belly dancing when the danse du ventre was considered both inflammatory and pornographic, the founder and pastor of the Church of Yoga which was largely dedicated to Tantric spirituality and “male continence” (AKA coitus reservatus), lecturer on the negative impact of “Phallic Worship” and energetic champion of women’s rights especially for the right to education, “psychic researcher” and sometime-medium who sought communion with the deceased and (as we shall see) made a deep and lasting connection with one of them, and sexologist and sexual advisor to married couples whose advice, horrifically vile in its day, seems just good common sense today. Among her ground-rules for a happy sexual life were:

•Practice good grooming
• Slow Down
• Be naked and not ashamed
• Try different positions, and, finally:
* Keep the mind focused, engaged, and free from distracting worries, which included the idea that couple should, “Think and talk during the nude embrace, and also at intervals during the sexual embrace, of good books, pictures, statuary, music, sermons, plans for benefiting other people, noble deeds, spiritual aspirations . . .”

In sharing her opinions with the public, by way of direct lecturing and/or the written word through a series of pamphlets that she sold through mail order, Craddock created two life-long enemies.

The first was Anthony Comstock, head of the New York Society for the Suppression of Vice, who managed to make his role in local politics into one that would have national impact as he established himself in the position of special agent for the U.S. Post Office in order to oversee and censor materials sent through the public mail system. In this role, Comstock oversaw the creation of laws that he would later use to confront Craddock and others who argued that their First Amendment rights to free speech overrode Comstock and his theocratic ilk.

Second was Craddock’s own mother, Lizzie, who, mortified by her daughter’s antics, on more than one occasion attempted to have her daughter committed to a mental ward.

Perhaps the tipping point for poor Lizzie had to do with her daughter’s marriage. As Ida reported it, “My husband is in the world beyond the grave, and had been for many years previous to our union, which took place in October, 1892.”

As author Schmidt continues, “Being curious about spiritualism and psychical research was perfectly common among liberals and agnostics, but there was no way for Craddock to make this claim about a heavenly marriage anything but a bombshell.”

Indeed. When told of Ida’s ghost husband named Soph, the reader is left to imagine just what statuary and good books Ida and her husband discussed during their naked embraces. And to struggle, even as the author struggles, to pull together the peculiar stands of insight, political activism and neurosis that shaped Craddock’s life and work. And that led her, at the end of her life, to write: “I was in full control of myself, as queen of myself; and I WAS A WOMAN!”

Which brings us back to October 10, 1902, the date on which Ida Craddock entered a Manhattan courtroom to defend herself against charges of obscenity that had been brought against her by Anthony Comstock. It was here that Judge Edward B. Thomas echoed Ida’s own conclusions and declared Craddock to be “a very dangerous woman” and it is here, on page 211 of the text that Heaven’s Bride catches fire. The ponderous text here at long last takes flight and the story of Ida Craddock’s trial and its aftermath at last makes for an engrossing read.

But, you know, coulda, woulda, shoulda. It is a very long path on some very dark roadways that brings the reader at last to a place of enlightenment. With such rich, odd, and, yes, dangerous material, the story of this brilliant madwoman and her heavenly husband, is there really any excuse for burying the lead?