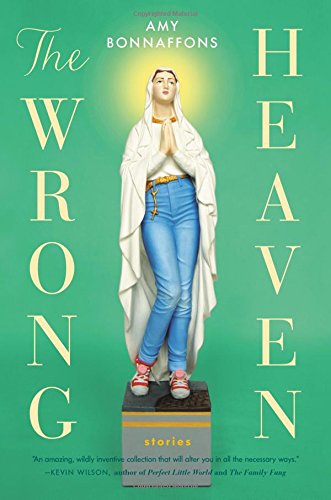 “These stories are indeed strange, but no stranger than the political and moral universe we now inhabit, although infinitely more pleasurable and enticing.”

Creating a compelling universe in under ten thousand words—the task of the short story writer—is one of literature’s most demanding challenges. Creating ten entirely distinct universes that successfully capture and distill the underlying ethos of the author’s own era is a literary event that occurs only a few times in each generation.

The publication of Amy Bonnaffons’s debut short fiction collection, The Wrong Heaven, reveals itself to be one of those elusive and enthralling occasions. The author strikes like an earthquake in a land that hardly recalls mild tremors, evoking quivers of awe at both the power of the written word and the scope of human imagination. And if that is not enough for audiences, there is also a copyeditor who turns into a horse.

What is remarkable about The Wrong Heaven is that it is not only a brilliant story collection, but also a manifesto-in-action announcing what the contemporary short story should be. Novelist John Gardner (1933–82) popularized the notion—in a quotation that has been falsely attributed to both Tolstoy and Dostoyevsky—that “there are only two plots: a stranger rides into town, and a man goes on a journey.” This dichotomy may have aptly described the colorless, hidebound world of John Cheever and Alice Adams, but the rise of magical realism requires a new framework.

Bonnaffons provides this scaffold explicitly in the collection’s title story, an unsettling tale in which a second-grade teacher purchases lawn ornaments of Jesus and Mary that spring to life when plugged in. The protagonist explains, in embracing this improbability, “I believe the world is malleable, that our understanding of it is provisional, improvised, subject to a change of rules at any time; that sometimes the magician pulls out the tablecloth and the dishes all stay in place, and sometimes the magician pulls out the tablecloth and everything is gone, including the table.” In Bonnaffons’s micro-universes, the rules change suddenly, often inexplicably—and the test is how the characters accept or reject those surprises.

Bonnaffons is certainly not the only contemporary writer who brings this dynamic to short fiction. Her approach echoes that of Karen Russell, Kevin Brockmeier and Robert Olen Butler—to name a few of our most gift magical rule-shifters—but the striking and unflappable facility with which her characters address their new realities is something novel and breathtaking.

For instance, in the haunting, Holocaust-tinted “A Room to Live In,” the narrator is commissioned to carve a dollhouse replica of the Vienna apartment where the client’s refugee mother grew up, right down to miniature facsimiles of the three ill-fated children. When two of these copies climb out of the tableau and begin exploring her apartment, the artist determines to keep this development from her husband. She does not question the sudden animation of the wooden figurines, only their implications for her marriage: “One thing was certain, though: if my creations spoke to him—if these two compartments of my life overlapped and interacted—it would complicate everything, in ways I could not apprehend. It was not a development I felt I could risk.”

Yet the husband, Carl, is himself a man who can embrace the illogical contingencies of the world. The narrator observes:

“On the one hand, I suspect that Carl would be less perturbed than a normal person if he came across a four-inch talking human: unlike anyone else I know, he believes in the inherently secret nature of everything. He believes in the dream life of penguins, in the quiet longings of plants, in the muscles and heartbeats of prehistoric fishes. He eats oranges slowly, out of respect.”

Carl and Irene are well-matched as a couple, able to welcome the unforeseen and mysterious. Bonnaffons, for a brief interlude, persuades readers to believe in these possibilities as well.

In many magical realistic narratives, characters grapple for explanations. Bonnaffons’ heroines acknowledge that explanation is often not attainable. So in “Horse,” a story of a woman who undergoes injections to transform herself into a wild equine, neither the subject nor the corporation that offers the treatment can fully account for themselves. The narrator merely knows, “What I wanted was something not offered by human existence at all.” When she asks her interlocutor from the corporation to demystify the process, the answer she receives is: “No one understands how science works, not even the most scientific scientists.”

Although these are serious and provocative stories, Bonnaffons displays an impressive gift for humor and for ingenious turns of phrase. When the narrator in “The Cleas” applies for a babysitting job that requires a “Background in art/early childhood education/creative moment”—none of which she knows anything about—she lies, and quips of her employers, “They didn’t call my bluff, or my references.”

“It’s hard to say without a working knowledge of Hungarian idiomatic expressions. In the obscure dialect region from which Dr. Beláček comes, the same word is used for ‘conundrum,’ ‘miracle’ and ‘mistake’; it has also been used to refer to the feathers of a chicken (but only in circumstances when they are no longer attached to the chicken.)”

Any reader who cannot appreciate the compact virtuosity of these moments probably should not be allowed near a book without a tutorial on humor and a sound horsewhipping.

Yet this wit rests of a bedrock of well-earned profundity. A lesbian couple in “Alternate” who volunteer for Barack Obama’s 2008 election campaign breaks up, and the narrator observes—channeling Joseph Conrad—“Despite our best efforts to become different people, we had remained ourselves.” In lesser hands, this might seem a mundane regret; in this specific context, it becomes a powerful commentary on the state of the entire nation. “Barack Obama had promised us the future,” reflects the narrator. “Instead we’d got what we always had: the present.”

Similarly, when the animated wooden refugee children in “A Room to Live In” ask their carver whether she is God, Irene responds, “Well, not in an absolute sense. But in reference to you, yes, I suppose so.” Later, when she feels compelled to punish these dolls or misbehaving, she says, “[F]orcing other people to suffer, even if for their own good, has got to be the loneliest feeling in the world. I stopped working. I sat there and sympathized with God.”

In “The Cleas,” the babysitter narrator tries to avoid Zander, her love interest, because she likes him too much. In her experience, she laments: “When I like someone, I try to keep things hypothetical for as long as possible. Everything disappoints. There’s always a moment of turning away, on one side or the other.”

In this regard, Bonnaffons is demonstrably wrong in one regard. The Wrong Heaven never disappoints. Bonnaffons is a authoritatively knowledgeable writer, dappling her stories with epigraphs from Rilke and Aristotle, and references to transcendental empiricist philosopher Gilles Deleuze and the 1960s sitcom I Dream of Jeannie.

She is also an intensely wise writer who has a keen sense for the pulse of this complex moment in history—who has written stories in which facts, if not truth, are always negotiable. These stories are indeed strange, but no stranger than the political and moral universe we now inhabit, although infinitely more pleasurable and enticing.