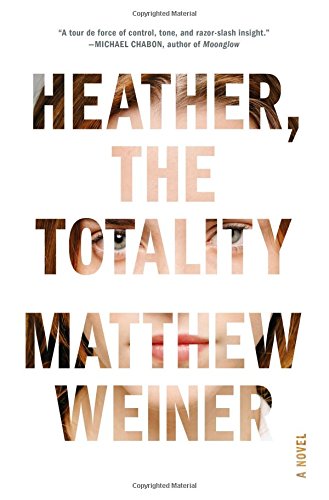 Matthew Weiner is best known as the producer and writer for two of television’s most successful series, The Sopranos and Mad Men. Here, in this slender but searingly intense novella, Heather, The Totality, he finds a nailbiting drama that suits his storytelling skills. In a series of 211 short paragraphs divided into five parts, he provides electrifying vignettes that bring together four disparate lives in Manhattan.

The novel follows Mark and Karen Breakstone from their first meeting at a blind date, through the next 18 years of their sometimes wobbly marriage; from the birth of their daughter, Heather, up to the ultimate catastrophe that befalls them. Weiner uses multiple points of view from Mark, Karen, Heather, and a young sociopath, Robert (Bobby) Klasky to explore class and cultural differences that eventually and inevitably collide.

Weiner records every heartbeat of each of his characters.

Mark and Karen meet and marry late in life—in their forties. There is no immediate attraction. Mark’s physical features—a fat face, round cheeks and nose—do not appeal to Karen. But “she thought he was very funny,” and, more importantly, working in finance, he had the “potential to be rich” and provide her with the luxuries she desires. Karen gives up her ambitions in publishing to work in “the adjacent world of public relations.” They settle into a co-op in a “ten-unit apartment building west of Park Avenue” and begin to reap the benefits of their social status.

But a decade before Mark and Karen meet and marry, the budding sociopath, Bobby, is born across the river in Newark, New Jersey. Their lives seem to be taking divergent paths but it is clear from the structure of Weiner’s novella that they are fated to meet at some point.

Each part of the book is marked by Heather’s growth and development and how it affects her parents. From an early age, Heather’s beauty—blonde hair and “large blue eyes”—attracts the eyes of strangers on the subway, at grocery stores, in the park. By the time Mark is 55, his “maximum disinterest” in Karen has already turned to an attraction with a 26-year-old Asian trainee at work. He also looks forward to his private times with Heather—mostly on the weekends—when they explore museums, galleries, and see movies to the point that Karen suspects an unhealthy fixation.

The “real trouble,” however, is ahead for the Breakstones. It starts when a hedge fund manager, his wife, and two sons purchase the penthouse above them and begin major renovations on their building. As an itinerant worker, Bobby, the son of a single mother heroin addict, is attracted to their lifestyle—the satin velvet-covered furniture, “the kitchen where the cabinets and even the refrigerator had glass doors and were packed with food,” a “1200-dollar handmade Italian espresso machine that came with video instructions because it never worked the same way twice.” When Bobby spots Heather smoking on the roof, their twin destinies are sealed. It’s Mark, however, who is the catalyst for a charged and catastrophic meeting. He sees Bobby stalking Heather and begins his own brand of pursuit, finally inviting Bobby into their apartment with his own nefarious plans in mind.

From there, everything is downhill and Weiner exploits every element of suspense, working toward a conclusion that has been intricately prepared for with minute details throughout the novella. What culminates in an ending which many readers might expect, Weiner embraces Edgar Allan Poe’s basic tenet of mysteries: that everyone is capable of murder.

Heather, The Totality, is perhaps best binge-read in its totality in one sitting. Weiner’s choice of short paragraphs makes for a heart-stopping afternoon or evening read.

Robert Allen Papinchak has reviewed a range of fiction for such venues as The New York Times Book Review, USA Today, The Washington Post, Chicago Tribune, The Seattle Times, Publishers Weekly, Kirkus, and others.