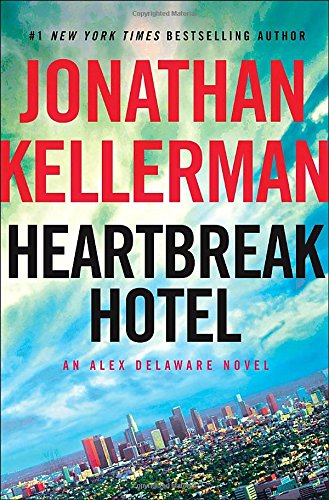 Heartbreak Hotel, the 32nd novel in the Alex Delaware series by Jonathan Kellerman, begins with an enticing hook. A child psychologist working on the side with the Los Angeles Police Department, Delaware changes things up by agreeing to begin consultations with Thalia Mars, who will soon celebrate her 100th birthday.

When they meet in her room at the Aventura Hotel, which has seen better days, he finds her to be witty, charming, quite lucid, and very mysterious. Intrigued, he agrees to a follow-up appointment; however, when he returns the next morning, Thalia is found strangled to death in her own bed. Now Delaware and LAPD homicide detective Milo Sturgis must discover who would want to kill an apparently harmless old woman. And why was she asking such odd questions about psychopathy, guilt, and victim selection?

A doctor of psychology who specialized in the treatment of children before launching an immensely successful career as an author, Jonathan Kellerman is essentially a thriller factory, with more than 40 publications to his credit. Therein lies the problem with Heartbreak Hotel. After so many Delaware and Sturgis adventures, fans know exactly what to expect from their heroes, and Kellerman really doesn’t need to expend much creative energy to keep them happy.

After beginning with such an inventive premise, the plot is disappointingly predictable. Kellerman did the arithmetic, identified in which decade Thalia would have been a young woman getting into trouble, and produced a half-baked story involving gangsters, gun molls, and money laundering to tie up all the threads.

Although it’s hard to believe there’s a reader on the planet who hasn’t read an Alex Delaware novel, there may be a few newcomers who will scratch their heads at characters who are this thinly developed. For example, the woman named Robin who lives at Delaware’s house is apparently his wife, but the narrator doesn’t really say so and makes absolutely no effort whenever she wanders into a scene: “She picked up a sandwich, nibbled, put it down. ‘Delicious, you’re the perfect man . . . so why would a hundred-year-old chick call you?’” Perhaps in previous novels Robin was less superficial.

Milo Sturgis, of course, is a fan favorite. Our mythical new reader, however, can’t help but wonder why an experienced LAPD homicide detective works with a civilian partner; however, as Sturgis explains to a witness: “He has an interesting brain and we like to tap it.” Our mythical new reader must be content with this explanation, flippant or not.

After so many publications, Kellerman apparently doesn’t need to hone his storytelling skills and seems to have written this one without putting much effort into effective narrative technique. When Delaware arrives at the Aventura Hotel for his first consultation with Thalia Mars, for example, it takes a page and a half to move our stalwart hero from the street entrance to the front reception counter. In between the reader is treated to the narrator’s opinion on everything from overgrown palms to the “brain-eroding” Muzak and strangely-colored leather chairs in the lobby, the pallid, pony-tailed employees behind the counter, and every other disdainful thing in between: “Ranchero Revival meets Missile Silo meets twenties Paris meets Fred Flintstone via Beijing.”

Metaphors also present a few rough spots. The hotel is described rather unpleasantly as a “Spanish Colonial Mama struggling to birth a giant alien.” Late in the novel, when reviewing information on former LAPD Commander Demarest, whom Sturgis describes as a “tree with rotten roots,” the reader learns that “a ragout of charges had been leveled at Demarest, creating a legal tsunami that washed him to San Quentin on a thirteen-year sentence.” One wonders what this character must have looked like showing up for incarceration after having survived a meat stew tidal wave. What a mess.

Ultimately Heartbreak Hotel is a slow, unsurprising, disappointing novel. Although the book ends with a great little colophon “About the Type,” which every publication should include for all the typography geeks out there, it’s not enough to turn this frown upside down. Jonathan Kellerman, unfortunately, spoiled a great opening premise by mailing this one in.