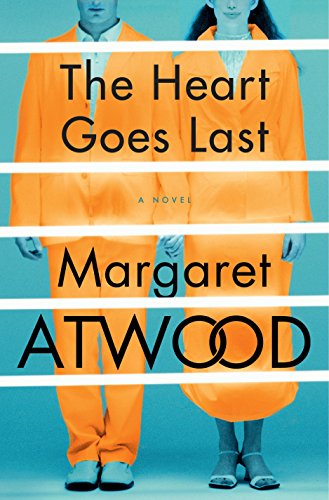 Margaret Atwood has the uncanny ability to create works of literature that read like topographical maps with big red arrows that announce, “You are here.” or at least, “By the time you read this you will be here, like it or not.” The Handmaid’s Tale certainly is an example of this, fiction as prognostication. And Atwood’s strangely uneven new work, The Heart Goes Last, most certainly does as well.

It is, as they say over in TV Land, “Ripped from the headlines.”

The Heart Goes Last—and what a superb title that is—seems set in an eternal 2008, a world in which everything that so recently was to be counted on, or at least aspired to (having a job if not a career, owning a home, or, at the very least, being able to afford to rent one), has been ripped from underfoot.

In this world, Charmaine and Stan are luckier than most. Although they have lost their income, their home, and nearly all their possessions, they have managed to keep hold of their car, which brings us to the novel’s splendid opening lines:

“Sleeping in the car is cramped. Being a third-hand Honda, it’s no palace to begin with. If it was a van they’d have more room, but fat chance of affording one of those, even back when they thought they had money. Stan says they’re lucky to have any kind of car at all, which is true, but their luckiness doesn’t make the car any bigger.

“Charmaine feels that Stan ought to sleep in the back because he needs more space—it would only be fair, he’s larger—but he has to be in the front in order to drive them away in case of emergency. He doesn’t trust Charmaine’s ability to function under those circumstances: he says she’d be too busy screaming to drive. So Charmaine can have the more spacious back, though even so she has to curl up like a snail because she can’t exactly stretch out.

“They keep the windows mostly closed because of mosquitoes and the gangs and the solitary vandals.”

Few authors working today can set in place such dynamic circumstances with so few well-chosen words.

And perhaps no other writer so well understands the workings of the human heart as they relate to the suspicions of the political—or, better, the politically charged religious—mind.

So the reader, in having made his way through this book, the product of such a talented and passionate author, can’t help but ask: What happened?

In truth, The Heart Goes Last reads like one of those cobbled-together novels in which an author of note has sadly passed away leaving only a fragment of their intended work, only to have that book finished by some hack writer. What begins with brilliance, with deep anger and deep understanding of our world and just how we got where we’ve gotten to, ends with a caper. A caper involving an offshoot of Vegas’ Blue Man Group irritatingly called the Green Man Group because, get this, they perform a tribute of sorts to the world’s ecosystem.

Still the reader reads the opening beats of The Heart Goes Last with a potent sense of dread. Poor Stan and Charmaine barely have a chance to meet, marry, and settle into their lovely home, their lovely life, before all hell breaks loose. As Atwood puts it: “That didn’t last, though. The happiness. The safeness. The now.”

The descent is swift. They move into the Honda, and very swiftly become aware that, by owning it, by having anything of value, they have become targets of marauders who would rob them of that, who would murder Stan after making him watch them rape and murder his wife.

What few memories they have of happier times—Charmaine particularly clings to the homilies that her Grandma Win once told her, things like Cleanliness is next to godliness and godliness means goodliness, or, Let’s make popcorn—don’t add up to much when balanced against the life that has been handed them. (Atwood makes the clear point that the one percent have managed, in the total and catastrophic global financial collapse, to go on their way unscathed.)

This part of the novel works wonderfully well. It is lean and potent, cinematic in its presentation of world facts that so nearly mirror our own that only those with near complete memory loss would fail to be affected. It is a near perfect premise of a modern novel.

Sadly, what follows is a transition into another place, a place in which all the threat of what the world has become is lost within a walled community.

Just when Stan and Charmaine are at the end of their ability to cope, they hear of a potential solution. A privatized means by which the chronically jobless and completely hopeless can be saved.

Because the Positron Project needs volunteers.

Here’s how it works: the volunteers—who must agree to sign up for participation in the project for the rest of their lives—who are accepted into the program (and it is by no means sure that all who apply will be accepted, although the fact that Charmaine and Stan are young and attractive, with good teeth) move into a safe zone comprised of a community of buildings and a penitentiary, all located within a wall to keep the bad element out. Participants spend one month living in a very nice house and the next serving time in prison.

As Atwood explains it:

“Positron Project had changed the name of the pre-existing prison, he tells them, because ‘The Upstate Correctional Institute’ was dingy and boring. They’d come up with ‘Positron,’ which technically means the antimatter counterpart of the electron, but few out there would know that, would they? As a word, it just sounded very, well, positive. And positivity was what we needed to solve our current problems. Even the most cynical . . . even the most jaundiced would have to admit that. They they’d brought in some top designers to consult on an overall look and feel. The fifties was chosen for the visual and audio aspects, because that was the decade in which the most people had self-identified as being happy. And that’s one of the goals here: Maximum possible happiness. Who wouldn’t tick that box?”

With all this—with this Brave New World for which Doris Day is always the soundtrack, as the residents jump into their orange jumpsuits and rush off to prison and everything seems to play out like the most unrealistic of reality shows—Atwood seems to deepen her premise, athough echoes of Invasion of the Body Snatchers and 1984 and films like Pleasantville and even shows like The Real Housewives of New Jersey begin to intrude.

It is perhaps at this point that Margaret Atwood fell asleep next to a pod and was replaced by an alien who had a totally different story to tell.
Because within a very few pages, the story that the reader thought he was reading is replaced by the replicant tale, and everything changes. And not for the best.

Suddenly, Charmaine is having an affair with the gentleman who, with his wife, lives in the house when that couple is out of prison and Stan and Charmaine are incarcerated. They can only meet once a month when the couples are changing places, and, even then, only for a couple hours, which makes for hot, sweaty sex.
And, from there, well, there’s that caper I warned about. And knitting circles. And sex robots. And the global market for body parts and baby’s blood. And everything that started out so powerfully, so furiously, so ripped-from-the-headlines is suddenly only far-fetched if it is to be fetched at all.

The reader emerges from The Heart Goes Last with a sense that something has gone terribly awry. Not only with the world around us—although that has indeed fallen into the crapper. But also with this novel, which started out so well, and ended up as something that might one day be adapted by the SciFi Channel, to be broadcast between reruns of Battlestar Galatica and the next iteration of Sharknado.