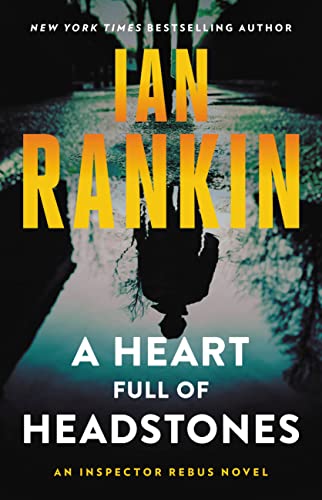 “A Heart Full of Headstones is another excellent crime novel from an author at the apex of his craft.”

Now that pandemic restrictions have been lifted, retired police detective John Rebus has finally been able to get out again, walking his dog to the local pub and looking in on his daughter and granddaughter.

So when he receives an invitation from an old nemesis to pay a visit, curiosity gains the upper hand. Big Ger Cafferty is a former Edinburgh crime boss who, like Rebus, has also been relegated to the sidelines in old age. His request of Rebus is simple: Find Jack Orem, who’s been missing for several years after bad dealings with Cafferty, and bring him around for a reconciliation.

Meanwhile, Detective Inspector Siobhan Clarke is assigned to a case involving an accusation of domestic abuse against a constable in the notorious Tynecastle police station. When the constable threatens to start talking about the years of corrupt behavior carried out by his fellow Tynecastle officers, in exchange for a deal, the others close ranks, and Clarke soon finds herself with a murder on her hands.

Worse, Detective Inspector Malcolm Fox, formerly of Complaints (Internal Affairs), has been seconded into the investigation and is determined to ensure that Rebus will pay in full for his share of the questionable behavior that blackened Tynecastle’s reputation for so very long.

A Heart Full of Headstones is Ian Rankin’s 24th installment in his superb Inspector Rebus series, and it’s proof that he still knows his business when it comes to dark, moody crime stories.

While Rebus may be a mere shadow of his former self, physically speaking, he still possesses the hard-nosed attitude and grim determination that made him so respected (and resented) as a detective. Rankin understands the importance of his protagonist to his readers, and in this novel he continues to develop our insight into Rebus as the latter chapters of his life story unfold.

Rankin has also done a good job of bringing Siobhan Clarke forward as a primary character. She and her colleagues, along with Malcolm Fox, carry on with the police procedural elements of the novels, and Clarke has enough personality and room to develop that she continues to maintain our interest.

However, let’s be clear—it’s Rebus who conducts the electricity in these stories.

Police corruption has always been an ongoing theme in the series, and Rankin has paved the way for much more to come in his ensuing novels.

So, too, has he set Rebus up for a hell of a finale, if that’s what’s coming next. If you read this novel (and you must!) you’ll be pacing the room waiting nervously for the sequel along with the rest of us.

A Heart Full of Headstones is another excellent crime novel from an author at the apex of his craft.