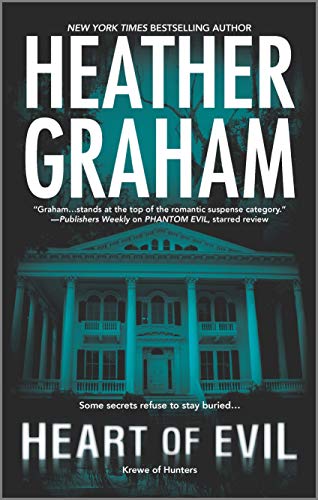 The Donegal Plantation keeps its head above the muddy waters of the Mississippi by operating as a high-class restaurant and guesthouse. It is steeped in history and haunting legends. At the end of the annual re-enactment of a battle, the body of one of the actors is found hanging from a statue in the family’s graveyard. A team of FBI paranormal investigators is called in, one of whom, Jake Mallory, is an ex-lover of the heiress, Ashley Donegal. The publicity for the book promises the unveiling of evil that "has the power to shake the plantation to its very core” and since the author is VP of the Horror Writers Association, what doubt could the reader have?

The location offers so much horror potential, whether physical in the form of the bayou, the history of slavery and civil war, or paranormal in the form of ghostly apparitions and interventions. The great colonial house alone is a horror writer’s dream. Surprising then, that Ms. Graham chooses to chatter her way around the estate rather than get to grips with the materials she has laid out for herself.

The first three chapters introduce too many characters, and each one comes with his or her own overload of backstory. Some of the writing is competent, but there is so much here that is over written it feels, at times, like a first draft:

“She shook her head again and realized she was doing so enough to give herself brain damage. She forced herself to stop.”

The urge to skim is always present. At times adverbs and dubious speech tags leap from the page as if the alligators are after them:

Somehow, even the ghosts are made to appear without creating the slightest sensation of fear or dread and, despite the labored prose, Ms. Graham manages to provide minute detail without creating much of a sense of place. Even after reading the whole book it’s hard to picture the house and the plantation with any real clarity. Heart of Evil may be enjoyed by aficionados of historical paranormal detective romance—there is certainly enough detail about the Civil War to keep historians happy—yet, even the love scenes come with the heat turned off. Mind you, there could have been a twist when:

“Cliff came trotting up on his favorite mount, Jeff.”

There is a lot of dialogue, some of it of the “just as if” school. In the heart of the “mayhem” with just about every member of the household under suspicion, the cook announces that she has to get away:

“There’s a crash course in vegetarian entrees being taught next week at a cooking school in New York.”

With over 100 novels to her name, Ms. Graham clearly has a huge following, but Heart of Evil is one offering that does not do what it says on the tin.