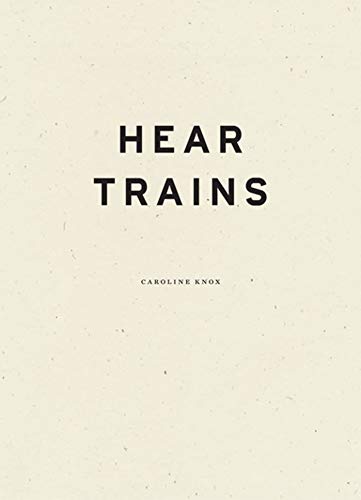 Caroline Knox’s poetry collection Hear Trains seems to arrive from another era. Its strong early poems are rural, sensory affairs. “Pomander” lays out ancient, Latin-laced steps for creating the perfumed object: “The clove, caryophyllus / is its named, a tongue twister, / like the clove itself.” Instructional and lovely, the poem steps into a scent-laced world that continues in “I Wouldn’t Mow the Field.” Here, the inventory is one of New England plant life in a snowless winter: “Until the meadowsweet, / which is a wildcat spirea, had given up. I wouldn’t mow it until / the ice could bear the machine.”

The approach is old-fashioned, a little meditational, with gestures back to Emily Dickinson. The shared affection for the Massachusetts countryside is almost enough to sustain the connection. But what follows is less balanced, less focused.

“Sun God Appears” provides a short-lined ode to the titular sculpture, found on the campus of UC San Diego. Not an unpleasant poem, but where does this come from, this oddity that might have been created by a student seeking inspiration?

“Cold Blob,” addressing the anomalous waters of the North Atlantic, rapidly loses focus. Scientific language and journalistic excerpts blur into largely unrelated linguistic reflections, then, by free association, an imagined dialogue between “an ignorant woman” and a geologist. The language is sharp, but the ideas fail to adhere, and the final reflection is too pat and, again, seems out of place in the work of a senior poet: “the cold blob is a bold / gob, the result of global / warming on this erose / biome we call home.”

The contrast between “I Wouldn’t Mow the Field” and “Cold Blob” is Hear Trains’ discomfort. The poems do not link into anything like a larger whole. Some are clear, sharp creations, but far more free-associate ideas and sounds without apparent purpose.

“Who Is Going to Tell You” sustains itself on a jest (or gesture) of punctuation. Its first lines, “that you can’t write a whole poem in /comma splice” seems a reasonable comment on the battle between poets and copyeditors. Yet what follows is not a sustained argument framed with commas, but a series of non sequiturs: “the tree trunk is covered with colonies / of creepy moss, the raisin bread is what you / don’t like, she says Kenya but he says Keenya,” and so forth. If it’s an argument for punctuational unity, then it’s one sustained without intellectual honesty. The failure of the poem is not a matter of punctuation but of broader connection, and line-length alone cannot contain what neither sense nor marked intervals will unify.

If Hear Trains has a purpose, that purpose may be anti-poetic. Perhaps “Who Is Going to Tell You” rails against the absence of rigor. “Code Switch” wants us to know that its first figure is literal: “Sophia (a real person, not / an allegory).” “Sonnet” is composed of only 13 lines. “Kimono,” an ostensible concrete poem, never quite achieves the shape of something worn.

The book, in its lovely, simple design and elegant typography, might be a warning: do not trust poetry! Yet if that’s the case, surely there should be clearer admonitions. Some signals, a wry gesture to the audience, should remind us of an underlying purpose.

The less satisfying possibility is that Hear Trains has no purpose. It’s a collection of occasional poems. The poems do not comment on one another. They were not composed as a book, but only as individual poems that were then bound together in an illusion of unity. The poems themselves are not unpleasant, but neither do they dazzle. They string ideas without regard and rely on sound to sustain them.

This is the sense in which Knox’s work is old-fashioned. Her poems arrive self-servingly, as if in a vacuum, expecting hands and eyes that know no poems but these. Their lovely moments are enough for themselves and do not comment on their dreary, sometimes hackneyed company.