Heading Home: Motherhood, Work, and the Failed Promise of Equality 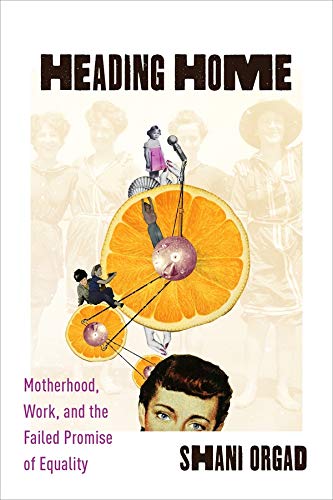 In a rather lengthy introduction Orgad justifies her choosing as her study population privileged, educated, heterosexual, mostly middle class, mostly white, full-time stay-at-home mothers in single-income families. This selection was made by purposive sampling and she does not claim that her respondents are representative of all educated stay- at-home mothers.

Other common characteristics are that her respondents came of age in the 1980s and 1990s and have “reaped the benefits of the feminist struggle,” and yet in choosing to become full-time mothers have made “choices fundamentally incongruent with contemporary dominant cultural ideas about desirable femininity.”

The feminist struggle is by no means over of course. And by “desirable femininity” she seems to mean “cultural and policy representations of women, work and family” which promote women “having it all,” namely a family and a career. She notes that her aim is to “draw connections and highlight disjunctures between the realm of women’s personal and private experience, and the realm of public issues around women, work and family as portrayed and discussed in media and policy.”

In fact current public discourse on gender, work, and family is much more diverse than she or her interviewees appear to recognize, and there are many varieties even of wifehood and motherhood to be opted for.

Her chapters aim to “distil some of the pivotal facets of the broader crises of gender, work and family in contemporary capitalism” under Section headings such as Forced Choices, Personal Consequences of Forced Choices, Curbed Desires; and concludes with Impatience.

The publication is based on 35 in-depth interviews with women who live in London and had left paid employment between three and 17 years earlier. These respondents were identified with some difficulty by posting notes on parents’ mailing lists in middle and upper class London neighborhoods, and on various social media mothers’ groups in the capital. It would be interesting to see how the request was phrased given the relative homogeneity of those who responded.

She also interviewed five male partners or husbands of women who were professionals turned stay-at-home mothers. None of these men were partners of the women interviewees, as she felt that to involve their husbands would cramp her interviewees’ candor. The five men were white, in mid-to- late forties, and in senior positions in technology and financial firms. She had difficulty finding these men and some of them proved “flaky,” refusing to commit to meetings. In actual fact a few husbands of interviewees make fleeting and unimpressive appearances: Maggie, for example called her husband down from “the toilet” to discuss with herself and the author the exact dates when he had been made redundant.

Focusing on media and policy representations of women “having it all” she emphasizes the negative  effects of these discourses on women’s  self-confidence that contributed to their leaving their careers, and to their making few and usually unsuccessful attempts to return. They felt that they didn’t have what it takes to “lean-in” despite encouragement from the mantras of Sheryl Sandberg and others.

Some of the more persistent substantive and institutional obstacles to women’s workforce participation such as the gender pay gap, limited provisions for and low take-up of parental leave, sexual harassment and bullying in the work place, child unfriendly offices, etc. are touched upon and should have been more rigorously analyzed as very pertinent factors in educated women’s quitting their careers for motherhood and their reluctance or inability to return.

The gendered division of labour in these homes seems to be alive and well though several women interviewed had also developed strategies for distancing themselves from “housewifery and domesticity,” by declaring their hatred for it and outsourcing as much as possible to paid helpers. Their time was filled instead by “managing” the home—decorating, renovating, entertaining etc as well as “intensive mothering” which involved detailed management of their childrens’ schedules. This is approach to domesticity is very much in line with Friedan’s 1963 Feminine Mystique though Friedan showed much more convincingly the political, commercial, and media forces that combined to keep women in the home after their men came back from the war to claim back their jobs.

Others among Orgad’s interviewees took up some sort of advanced study “in order to escape housewifery” or took up some kind of home-based entrepreneurship which they could combine with caring . . . or at least with what was not done by the “paid help.”

Though equipped with the consciousness and language of feminism these women yet described the decision to leave their career as a consequence of personal failure, seemingly unaware of substantive political and institutional obstacles that need to be addressed. And thus having no vision of what they might contribute to addressing them.

Heading Home gives the impression that its author is still working through what she actually wants to say. The oft-repeated “cultural and policy representations” of a woman’s role, against which these women find themselves falling short are over-simplified and insufficiently analyzed.

And it is hard to sympathize with many of the respondents who are supposed to have advanced feminist consciousness and vocabulary and yet seem incapable of being articulate about their own situations. One can only conclude that at least for some of these full-time stay-at-home mothers “leaning in” to the situation they have chosen is not such a bad option after all.