He Said/She Said: A Novel 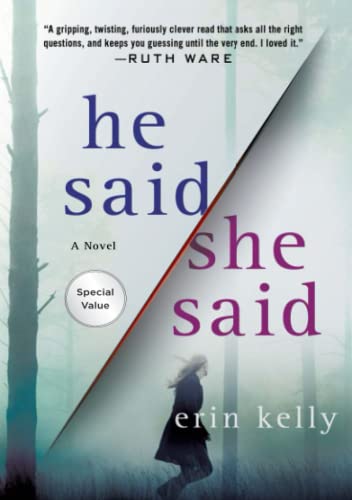 “The twists in what ‘love’ means and how people create their own strange moral universes are classic Kelly, and reminiscent of Barbara Vine at her spookiest.”

Minotaur’s reprint of Erin Kelly’s 2018 thriller makes this British page-turner available on the American side of “the pond” and demonstrates once again that Kelly is a true master of psychological suspense and chilling twists. As the author has said of herself, “My job is to imagine a strange situation and ask the question that will make it stranger still.”

In 2015, the charming young couple Kit and Laura live in London, expecting twins. He’s still going to travel, in order to witness a solar eclipse, the theme of his life so far—but he’s planned it carefully and made sure Laura will have support and protection while he’s gone. It’s not just the somewhat risky twin pregnancy that worried him: More than 15 years ago, when the two met at a summertime eclipse festival, Laura had witnessed a crime, and the trauma still haunts them both. The victim, clearly terribly disturbed, has stalked and hunted them to such an extent that they now live as close to “off the grid” as urban people can manage: no social media, assumed names, and more.

But will the very frightening “Beth” be able to identify them, now that Laura’s photo has shown up briefly on a media site, and Kit is predictably headed to the eclipse event? She knows about his lifelong passion—will she track him down?

Kelly frames this thriller around the phases of a solar eclipse, mimicking in plot what the sun’s disappearance does: an edge of overlap, a sparkling ring allowed for a bit, then total darkness, and the slow journey back to normal. For Laura in particular, this involves recapitulating the trial in which she’d taken part, the crime itself, the levels of threat.

With his voice alternating to tell another side, Kit reveals how threatened he feels by upcoming fatherhood and being potentially eclipsed himself by the babies on the way. Kelly’s use of first-person narratives means the of 15 years earlier are presented repeatedly. Kit fingers a knife, contemplating how far he’d go to protect his wife: “Would I tell Laura? Could I tell Laura? Could she live with me? Even knowing I only acted for her, would she still love me?”

But there’s an alternate set of facts hidden in the shadows, and only the small question of self-doubt from Kelly’s characters will begin to reveal what’s been transformed by time and lies.

The twists in what “love” means and how people create their own strange moral universes are classic Kelly, and reminiscent of Barbara Vine at her spookiest. Strands of deceit creep out of the narratives like ectoplasm in a séance, curling into the air and bringing lies back to life. There are few innocents in He Said/She Said—other than those twins on the way. Good luck spotting the others before the house of cards comes tumbling down in blood and manipulation.