He Died with His Eyes Open: A Novel 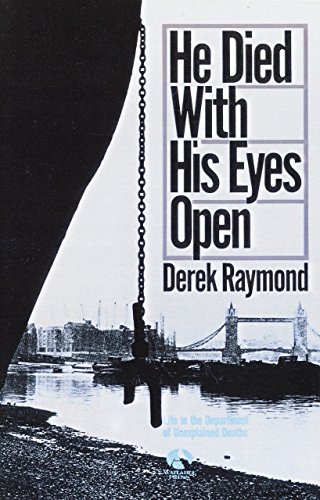 “Good writing can be so revolutionary that often it is not recognized in its own time. Often texts like this can come with the ‘difficult’ label attached; they’re the ones set aside for a later which might never come—mostly because the truth is a harsh mirror, unflinching and daring. . . . the fact that it is being reissued and being brought to a new readership, and now, can only be a good thing. . . . I strongly urge you to read this book.”

Good writing can be a revolutionary act. It can be a wondrous, uplifting experience for writer and reader alike. It can also be brutal, violent, and highly disturbing. Derek Raymond’s extraordinary novel, He Died with His Eyes Open, is definitely a case of the latter. This is a novel that lives and dies by the idea of writing as essentially a courageous act, of sticking one’s hand into a nest of snakes and being bitten, and telling the truth about it.

“Anyone who conceives of writing as an agreeable stroll towards a middle-class life-style will never write anything but crap.”

Within the text, author Raymond presents us with an arresting image (one that brings to mind the sadly departed Oliver Reed in his nude wrestling scene with Alan Bates in the film adaptation of Lawrence’s Women in Love): “The ordeal the writer sets himself is to track down existence and then, both stripped naked, fight it out.”

There is no doubt Mr. Raymond achieves this aim; the reader comes away from the experience—and this is certainly an experience—feeling bloody-nosed, battered, bruised. (This, after all is the first novel in a series, the last of which, legend has it, caused one publisher to throw up over his desk.)

Good writing can be so revolutionary that often it is not recognized in its own time. Often texts like this can come with the “difficult” label attached; they’re the ones set aside for a later which might never come—mostly because the truth is a harsh mirror, unflinching and daring.

Derek Raymond’s He Died with His Eyes Open was first published in the apocryphal year of 1984, and like 1984, this is a true state of the nation novel. Over the years, it has developed something of a cult following but nothing like the wider recognition it deserves, perhaps because of its labels—that “difficult” tag, the connotations that a genre novel brings with it. And though the echoes, the ricochets through time that have reverberated off this monster of a text can be felt in the works of bright British authors such as David Peace, Wes Brown, Ian Rankin, Ken Bruen, and even, in some cases Martin Amis, the fact that it is being reissued and being brought to a new readership, and now, can only be a good thing.

He Died is a novel which stands right on the tracks in front of an oncoming train, forcing the reader to look upon “the things you can’t stomach in people (. . .) the shit, the pus, the septic places everyone has . . .” It’s a novel that explores how consumerism, Thatcher’s Britain, society in general can leave people behind, can force people to and beyond their limits. This is society beyond the houses where “men garden at the end of the day, doing things to their hedges with clippers they bought by direct mail.”

It takes place in a Britain whose former virtues—“toughness, idealism, determination”—are “barely remembered.” The world Mr. Raymond describes is one of greed, brutality, selfishness. It’s a world that, sadly, bears many of the hallmarks of today’s Britain, with its growing underclass, disaffected, disinherited youth, August riots, and stern-faced Conservative government. It’s a world in which people are processed, just like the food:

“I could see part of the fridge out there in the purposebuilt kitchenette—it was full of the flesh of things that had been bred to die; processed, force-fed chicken and machined veg, curry beef dinner for one, cod slicelets from factory number three for two.”

The novel begins, according to standard crime fiction type, with the discovery of the body of a time-ravaged alcoholic who has been beaten to death and left in a “ghastly lonely area” of London. The case is taken on by the unnamed protagonist, a detective from the Department of Unexplained Deaths, peopled by employees who “work on obscure, unimportant, apparently irrelevant deaths of people who don’t matter and who never did. We have the lowest budget, we’re last in line for allocations, and promotion is so slow that most of us never get past the rank of sergeant.”

The only apparent clues as to what has happened to the dead alcoholic—Staniland—are some tapes left behind in his apartment. Our nameless detective is the avenging angel who, after listening to the tapes, takes it upon himself to uncover the truth, no matter what the cost. He rages against the dying of Staniland’s light despite the shrugging shoulders and the so what of the world at large (“There was nothing about Staniland in the paper. Staniland wasn’t news.”). The detective realizes the victim is a man who has “taken a terrible beating from the truth” and he understands he is the only one who cares.

“Though Staniland had died at the age of fifty-one, he still had the innocence of a child of six. The naïve courage, too—the desire to understand everything, whatever the cost. The fragile sweetness at the core of people—if we allowed that to be kicked, smashed and splintered, then we had no society at all of the kind I felt I had to uphold.”

The maverick detective on a mission to avenge a death is nothing new. Wasn’t anything new in 1984, either. This character type makes his bow across genres in fact, and bears some resemblance to a kind of Eastwoodian Wild West sheriff, too. But in providing a voice for the voiceless through the device of the cassette tapes, Mr. Raymond opens our eyes to the existence of the victim in a way that many bestselling genre novels simply do not.

The detective starts to get inside Staniland: “I kept trying to shut my eyes till it was late enough on in the morning for me to go out and get information, trying to visualize Staniland and how he had lived. A writing man, a self-confessed failure, tortured by the loss of his daughter . . .”

He begins “. . . to think, dream, almost be Staniland by proxy . . .”And eventually, “Dead though he was, I had begun to suffer from the delusion, because of his cassettes, that he was still alive. . . .”

The crime story becomes almost secondary to the detective’s walking through Staniland’s broken world, a world of “tarts, clubs, drugs and riots,” where “people stroll about in Battersea Park among the dogs’ turds as if they had all time before them.” We meet the people Staniland has met, including the eponymous Barbara, who, “. . . was hatched in fury like a wasp, and she’ll die in fury. Her promiscuity is aggression; she uses sex to obliterate a man—this is her revenge on existence.” And Staniland’s stepson, Eric, a man who “. . . has exploded like a tape recorder when you put too much juice through it. Like burnt out.”

This is a world in which the language is a hardened cockney. It is slangy, conversational, dotted with words like charver, moonfeed, and smazz. But it is strangely lyrical as well. We enjoy the way Mr. Raymond uses language in the way we enjoy the Nadsat of Anthony Burgess’s A Clockwork Orange. His turns of phrase are amusing and vital. Variously, he describes a taxi-cab operator as having a “face like a lorry driver who wants to overtake everything on the road,” a signature reminds him “of an aging virgin trying to shake an impertinent finger out of her knickers.” Contemplating entering a notorious pub, he wonders what he should wear, “and couldn’t decide between a Chieftain tank and a self-propelled gun.”

The novel is startling, from start to finish. It is unlike nearly anything else that has been filed away in the crime genre. The closest comparison would in fact be Krapp’s Last Tape, a one-act play by Samuel Beckett. And in the text, Raymond name checks “A Nasty Story,” in the play Staniland has written, “a title he’d borrowed from Dostoevsky.”

Medicine though, doesn’t always taste nice. If you’ve a hardy stomach, I strongly urge you to read this book.