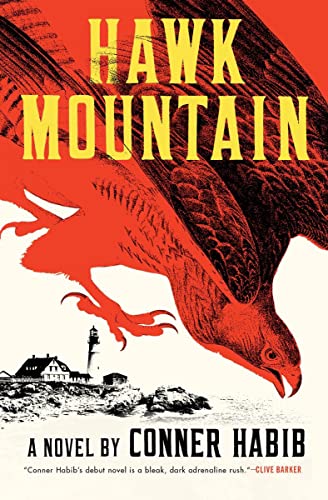 Hawk Mountain, the debut novel by Connor Habib, is a story of deception and manipulation involving people who exist in isolation and struggle to control repressed desires that often find expression in acts of violence.

Todd is seeking a fresh start. He has accepted a job to teach high school literature in New Granary, a small coastal New England town, and moves there with his young son Anthony. Todd’s marriage to Anthony’s mother Livia ended uneventfully four years ago, and Livia disappeared from their lives.

Todd and Anthony are enjoying a day at the beach when a man approaches Anthony. Initially leery of this stranger, Todd recognizes the man as Jack, a high school classmate. Jack is thrilled to have run in to Todd, a feeling that is not shared by Todd as Jack bullied Todd relentlessly and cruelly back then.

Even so, Jack forces himself on Todd, and they have dinner together. Jack continues to impose himself and manipulates Todd to invite him to spend the night. Over the next few weeks, Jack digs in deeper and deeper as he moves in with Todd and Anthony and develops a strong relationship with Anthony at times undermining Todd’s authority with his own son. Todd is conflicted with Jack’s reentrance into his life, which forces him to come to grips with emotions that had been buried in him since high school. Todd is relieved when he finally manages to convince Jack to leave.

“This was going to be Jack’s last night at the house and the three of them went to the boardwalk after school, late in the afternoon. Todd wouldn’t have to confront Jack with anything now, he could just walk and walk until the afternoon was over, then the evening, then tomorrow morning. Then Jack would be gone.”

The first part of the book shifts from chapter to chapter between Todd being bullied by Jack in the past and Jack’s involvement with Todd and Anthony in the present. The action of the story moves swiftly. All the chapters are all short and evocative, designed to keep the pages turning. The episodes of Jack’s cruel bullying of Todd in high school are vivid and emotion filled as Jack succeeded in not only tormenting Todd but in turning all of Todd’s friends against him. Todd desperately wants Jack out of his life.

However, this does leave questions as to Todd’s motivations: Why is he allowing this person who savagely bullied him in high school into his life to begin with? Why is he trusting his son with this man? The answers are promised in the high school trip the two of them took to Hawk Mountain.

The narrative takes an unexpected turn at the conclusion of part one when Jack’s stay with Todd comes to a sudden and violent end that involves Anthony just as Livia, Todd ex-wife, forces herself back into their lives, propelling the rest of the story as Todd seeks to keep her from having access to Anthony while struggling to maintain the secret behind Jack’s departure. Todd becomes locked in a downward spiral and seems bent on a path toward self-destruction as he risks everything of value in his life. Eventually, he is forced to take a final trip back to Hawk Mountain for his own self-preservation.