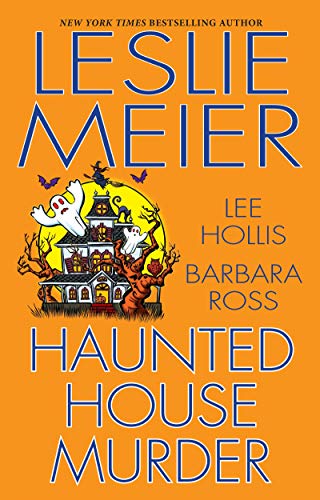 “Haunted House Murder is a tempting smorgasbord of seasonal suspense . . . Like an assortment of Halloween candy, one flavor might prove more immediately appealing or familiar, but you get to sample the others to see if they tickle your taste buds—and that’s a boo-tiful thing indeed! “

Fall is in the air, and we all know what that means: apple cider, pumpkin spice, and all manner of tricks and treats—both naughty and nice. Halloween-themed anthologies remain popular, and this year Kensington has gotten into the spirit with Haunted House Murder, which features a trio of cozy confections from tried-and-true authors Leslie Meier, Lee Hollis, and Barbara Ross—all of whom write series that use Maine as a backdrop.

This is the writers’ third collective offering following Eggnog Murder (2016) and last year’s Yule Log Murder. The novellas that comprise Haunted House Murder all feature properties seemingly steeped in the supernatural. Headliner Meier—who herself benefited from exposure in earlier anthologies fronted by Joanne Fluke—writes the long running Lucy Stone mysteries (the 28th entry, Invitation Only Murder, is due out in November); the brother/sister duo known as Lee Hollis is best known for their whodunits featuring Hayley Powell while Ross pens the Maine Clambake mysteries.

As Halloween nears, Lucy is delighted at the unexpected opportunity to care for her young grandson, Patrick. But costume shopping and cookie baking are interrupted by the arrival of Tinkers Cove’s newest residents, Ty and Heather Moon, who’ve just taken up residence in the town’s reputedly haunted house.

Never one to shy away from intrigue, Lucy endeavors to endear herself to the couple only to be unceremoniously rebuffed. Still, their odd behavior, strange sounds, and flickering lights indicate that something is amiss. The situation takes on unexpected urgency when Patrick goes missing after school . . . and was last seen entering the Moons’ house. It’s a surprisingly lighthearted tale, but there are healthy doses of atmospheric detail, small town politics (scary!), and domestic drama, which Meier always uses skillfully to augment her central mysteries.

Next up: Lee Hollis’s “Death by Haunted House”—a prequel story set in 2009 that finds (now) food writer and mother of two Hayley Powell still married to her puerile husband, Danny, and working as the office manager at Bar Harbor’s Island Times newspaper. Much to Hayley’s annoyance, Danny fills the kids’ heads with scary movies and ghost stories.

Imaginations kick into overdrive when the Salinger family (patriarch: Damien) moves in to the long-abandoned house next door and shenanigans ensue. Soon, Gemma and Dustin report seeing bodies being moved under cover of darkness—and while Hayley is loath to believe them, the discovery of a real-life corpse in the woods may change her mind.

This wisely conceptualized entry should satisfy Hollis loyalists while also serving as an accessible entry point for new readers, who will be treated to the dispatches (here, written by Hayley’s predecessor, Hattie Jenkins) and recipes that have become a series’ hallmark. As expected, the horror is outweighed by humor.

Barbara Ross closes the collection with “Hallowed Out,” which finds Busman Harbor’s clambake queen and restauranteur Julia Snowden reluctantly participating in a historical reenactment as part of a local haunted Halloween tour. But the act—which depicts the Prohibition-era murder of an infamous gangster—goes tragically wrong when an actual bullet fells thespian Spencer Jones in front of a small-yet-suspicious audience.

Turns out that Spencer’s acting wasn’t limited to the stage, and Julia is compelled to investigate the various roles he played in his personal life—and how these may have precipitated his death.

More than just a whodunit, the story further explores Julia’s relationship with her mother and boyfriend/business partner Chris while also illuminating the concerns that plague tourist towns during their off-season. Ross also expands the backstory of Gus’s restaurant, which was once used by rumrunners (first established in Fogged In). It goes down like a shot of sinister, but the aftertaste is sweet.

Haunted House Murder is a tempting smorgasbord of seasonal suspense that also serves a practical purpose: broadening each author’s readership while providing a stop-gap between their full-length series novels. Like an assortment of Halloween candy, one flavor might prove more immediately appealing or familiar, but you get to sample the others to see if they tickle your taste buds—and that’s a boo-tiful thing indeed!