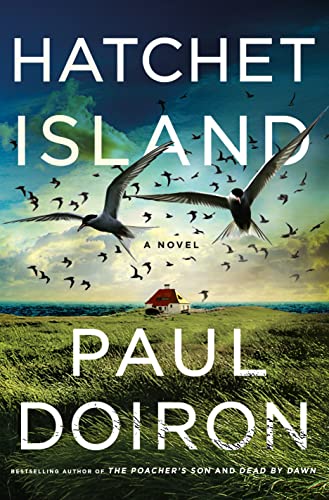 The mark of a strong series is central character development over time. Here in book 13 of the Mike Bowditch game warden series, we have Mike maturing from his hot-headed youth into a steadier, and much more grounded, investigator.

As a bonus, we also have his long, troubled relationship with Stacey Stevens moving into a new and healthier phase.

Both changes accelerate during their sea kayaking/camping vacation among the harsh, rocky islands off the coast of Maine. The trip goes sour almost immediately when Stacey’s friend, a research biologist with whom Stacey once interned, begs her for help with troubles on one of the islands—and to bring along Mike with his gun and badge.

That island is a protected breeding ground for seabirds, and the quartet of scientists residing there for the summer is studying puffin populations. The lead researcher is a “demanding egomaniac,” and the team’s life entails “living among strangers on a remote island where the constant cries of birds were like the lacerating voices in the mind of a paranoid schizophrenic.”

The lead researcher’s mysterious disappearance, coupled with harassment of the others by hostile lobstermen, racist/sexist stalkers, kinky photographers, and malicious night visitors releasing predators on the island to eat the protected birds, are the troubles Mike is called upon to help with.

A menacing link to a famous photographer on neighboring Hatchet Island occurs during the investigation. Hatchet Island enters the story quite late, which adds its own suspense because readers can’t help but wonder why the book is named for it. All becomes evident once the many disconnected threads start to entwine.

That happens when two of the researchers get murdered—including Stacey’s friend—and the third researcher vanishes. Then the leader holding so many missing pieces reappears only to commit suicide before contributing her pieces to the puzzle.

So many deaths on a research island kick into motion the gears of Maine and federal law enforcement, catching Mike in between as a semi-official liaison, and Stacey as a powerless adjunct. This aspect of the story will particularly appeal to fans of police procedurals, as the interjurisdictional dynamics drive much of what is pursued, how, and by whom.

Those complexities include a cop who has broken down from the strains of the job. His smoldering violence interferes with the investigation, as do the logistics of official parties getting to and from the island, and suffering mishaps that toss them out of action. Those setbacks further pressure Mike and Stacey to act on their own, whether appropriate or not for their positions.

And of course there’s the environment and the weather. No volume in this series ignores how physical conditions play into every action, every scene, every outcome.

A simple crossing between islands in a kayak in the fog becomes one of the scariest moments in the novel. In just a few paragraphs, we learn how easy it is for even experienced people to become lost at sea.

Despite all the dangers and complications, the story keeps focus on Mike and Stacey’s relationship. That leaves the crime side less compelling than usual. The plot setup is long and slow, although necessary at that pace to develop the complex scenario. Nevertheless, each scene is interesting, well written, and informative, true to the tone and setting the series has established.

Also a little different from previous volumes is a moral indignation expressed by several characters, which echoes issues and attitudes prevailing in today’s news and social forums. Murder mysteries are always about morality, since they center on the taking of life and tough questions about justice, revenge, punishment, and redemption. This story, though, carries an undertone that feels like the characters are serving as the author’s mouthpiece.

Nothing wrong with that; such expression is a by-product of art in all its forms. The point is that instead of getting wholly immersed in the story, readers might get distracted from it at intervals by subliminal voices reminding them of things they are agitated about in their own lives. This hovers on the edge of irritating intrusion for people seeking escape in fiction.

Regardless, the undertones plant the story in today and help convincingly portray the kinds of challenges—and dangers—that Maine game wardens might encounter. That raw material always makes for suspenseful crime stories, like this series has provided since it began.