Has the Gay Movement Failed? 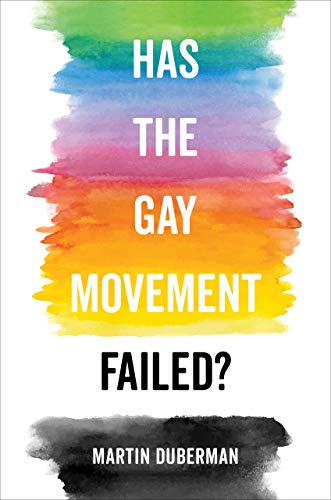 “Duberman’s book is deliberately uncomfortable. It raises difficult questions, and does not provide easy answers.”

An apt subtitle to Duberman’s book occurs when he quotes the writer-activist, Mattilda Bernstein Sycamore, who asks, “When did our dreams get so small?”

In the immediate post-Stonewall years, gay activists sought freedom from stifling social mores regarding gender and sexual behavior. Gay activism then, “envisioned a polyamorous sexuality freed from all association with procreation,” a rejection of marriage (which subjected women and children to the rule of men), a breakdown of rigid gender roles, an accompanying rise in androgyny, a world dominated by peace rather than war, an end to systemic racism, and a challenge to the rigid class system that serves a wealthy few. For a few years gay activists attempted to partner with feminists, labor unions, The Black Panthers, and others, so they could work together toward common goals.

The alliances were not easy, and over time they broke down, leaving LGBT activism increasingly dominated by middle class, white, males. Not coincidentally, the vision shifted from transformation to inclusion. By the nineties, the most visible most gay activism concerned marriage, nondiscrimination ordinances, and the right to serve in the military.

The major game-changer was AIDS. In the eighties and early nineties, many gay men saw that the sexual freedom of the seventies came had consequences far beyond the disease itself, as they were excluded from the hospital rooms of sick partners, or were disinherited by legal system that did not recognize their families. Marriage was a bulwark against some forms of social and economic insecurity that queer families faced.

One of the few weaknesses in the present book is that Duberman gives short shrift to this transitional moment in LGBT history. Perhaps this is because it has been covered so fully elsewhere (even by Duberman himself), but this portion of the book is painted in broad strokes, instead of his usual careful detail.

Duberman believes that many have been left behind in the march to the marriage altar, and many more have been locked out of the suburban home with the white picket fence. These include working class LGBT people, queer couples of color, and transgender people, all of whom are exponentially more likely to live in poverty and be the victims of violence than the primarily middle class people marriage benefits.

Duberman argues that laws prohibiting job discrimination against LGBT people are of limited value to those stuck in professions in which wages have been stagnating for decades, and he is skeptical of the right to serve in the military, which is overwhelmingly populated by people from minority and working-class backgrounds forced into a kill-or-be-killed profession in order to receive job training or a college education.

Of particular interest is what Duberman has to say about current laws regarding sexual activity, which still, too often, criminalize consensual behavior. He points out that if two teenagers are having sex, and one of them takes a picture, they have committed a felony and can be put on sex-offender registries that follow them for the rest of their lives.

Indeed, fully one quarter of people who are registered sex offenders committed their “crimes” while under the age of 17. Given that the sex lives of LGBT people were criminalized until Lawrence v. Texas, Duberman argues that the LGBT left should be the natural ally of teens—and others—victimized by harsh and puritanical laws that still penalize some forms of consensual sexual behavior.

Duberman also believes that gay rights organizations should be forming alliances with feminists and labor organizers, once again working together for common goals. And he believes that marriage and monogamy should not be seen as the defining life goals for LGBT people (or anyone), but that the financial benefits of marriage—including tax advantages and access to health care—should be extended to all, whether they are married, single, polyamorous, or serially monogamous.

Instead of working for sweeping change, however, Duberman argues that the major LGBT rights organizations are congratulating themselves on winning the right to marry, and are working on the passage of laws that will provide incremental improvement to the lives of middle-class, partnered, cisgender gays, while leaving people of color, the poor, the single, and the young to fend for themselves.

Duberman’s book is deliberately uncomfortable. It raises difficult questions, and does not provide easy answers. One of his chapters is titled, “Equality or Liberation?” The LGBT left has been successful in achieving some degree of equality—at least as far as marriage and the military are concerned. Now, Duberman suggests, it is time to pursue liberation.