Has Anyone Seen My Toes? 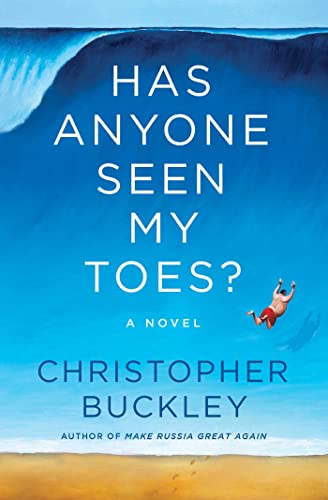 “very funny . . . if you’re ready to laugh at pandemic absurdities, this is the book for you.”

Christopher Buckley invites us to see the humor of pandemic times in his newest book, Has Anyone Seen My Toes? The book opens and closes with the main character peering over his sizable belly, hoping for a glimpse of his toes. In between, the retired, but not really, screenwriter takes the reader deep into his many obsessions, from the etymology of words (mayonnaise being a favorite) to the local coroner’s election. Why, he muses, is such a position elected? The writing is lively and funny, as Buckley finds the ridiculous in much of the ordinary aspects of life, during a pandemic or not.

The writer’s screenplay is threaded throughout the book, a work he’s sure is pure genius until it’s finished, and then he’s equally certain it’s pure dreck. Here he describes the synopsis for Heimlich’s Maneuver:

“German intelligence learns Roosevelt will be staying at the house of ‘the rich Jew Baruch’ right on the Atlantic Ocean. A chance like this will never come again. They devise a plan to parachute in a team of elite commandos who will seize Roosevelt and put him aboard a U-boat and take him to Germany. Hitler will use his prize hostage to get the Allies to call off the invasion and sue for peace. This screenplay will write itself.”

Naturally, it doesn’t. The writer keeps on finding himself stuck in corners. How, for example, can the commandos possibly kidnap Roosevelt given the high level of security he always traveled with? A flash of inspiration comes in the form of flaming pigs. Other problems are solved with similar creativity, including a scene with Jesse Owens as a U.S. Army Ranger.

The narrator’s creative process is fun to watch in itself. His other mental wanderings—and there are many—are equally diverting. He obsesses over almost anything that catches his attention:

“He reflects that he is often indignant these days. But why shouldn’t he be? There’s a lot to be indignant about. He hasn’t seen his toes in months, and no one has volunteered to find them. He can’t get his morning newspaper without risking snakebite; can’t go for a walk without the possibility of being devoured by predators left over from the Oligocene. His iPhone is fat shaming him. Proust can’t write a sentence without three dozen subordinate clauses. The feds have put a hold on his passport application in order to draw him into the open. Donald Sutherland’s tongue is being ravaged by mouth-eating parasites. Moles lay waste to his tomatoes, protected by his own wife. And cast members of The Russians Are Coming, The Russians Are Coming are dying off at an appalling rate of two per day. Does anyone care? No. This is how civilizations die.”

Much of this rant comes from the rabbit holes the narrator dives down looking things up on the internet. Buckley is very funny about the modern tendency to live in our screens. He has found all the bubbles that need bursting in our current preoccupations. If you’re ready to laugh at pandemic absurdities, this is the book for you.