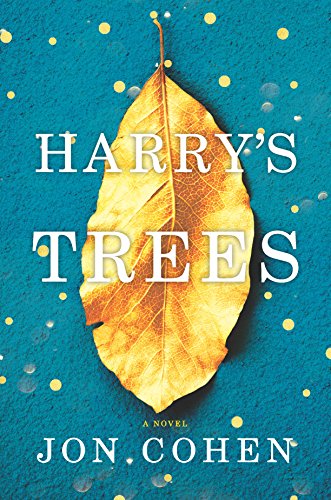 Ever walked into a forest? Evocations of enchantment, majesty, beauty, and even fear are all around. The stuff of fairytales. From the Garden of Eden on, and quite aside from their practical offerings of oxygen, shelter, warmth, nourishment, and decoration, trees have always been associated with mysticism, myth, and magic. But you don’t need a crystal ball to realize they play a leading role in this particular modern-day “fairytale”—one look at the cover says it all.

Filled with quirky characters, including a couple of very bad baddies, the story embraces all the opposites—tragedy and comedy, love and hate, sin and redemption—just like any fairytale worth its salt. Although when Harry Crane’s wife dies in a freak accident, fairy tales and, worse, happy endings are the last things on his mind.

It all began (once upon a time, you might even say) when, as a child, he sought safety from his bullying brother, the aptly named Wolf, and solace from the sadness of a neglectful father in the branchy embrace of the huge American beech in the back yard.

“The tree was fixed to the solid ground. Maybe its roots went all the way down to the center of the earth,” he thought. Faithful and true, unlike his wayward father it would never go anywhere.

“Young Harry mourned quietly, high up in its branches. If there were tears, he never let Wolf or his mother see them. Staring out over the leafy tops of neighborhood maples, pines and hickory, he imagined himself a dweller in a serene place he called Harry’s Trees. Floating in the sea of green, safe among friends, some of whom had wonderfully strange names like fire cherry, pignut hickory, shagbark hickory . . . By high school, he knew everything about trees. Harry pondered the biology of taproots, boles, crowns and radicles.”

No wonder, then, that Harry takes a job with the forestry department when he grows up. Not that he loves his work. Far from it. He’s deskbound, for one thing, perusing green smudges on satellite maps and pushing around data graphics unable even, despite weeks of uncharacteristic protest, to save the only tree he can see from his cubicle window from being chopped down to make space for more parking.

So when lovely Beth, the only light in his otherwise dreary life, is killed all the devastated staid and steady Harry can think of to do is drown his sorrows in his job. Sometimes he even goes to work before dawn; on Saturdays and Sundays, too. Better that than staying home where everything summons up images of his dead wife.

To the delight of his co-workers, Harry chooses all the worst assignments, “the deadliest of the deadly dull, day in and day out, rolling the bureaucratic shit ball uphill like a Saharan dung beetle.”

Until one day he doesn’t.

Triggered by a lottery load of guilt and a deep depression, Harry finds himself in a forest far, far away, where he soon crosses paths with Oriana, a nine-year-old girl whose life has been as devastated as his own.

And that’s where the real fairytale begins. . . .