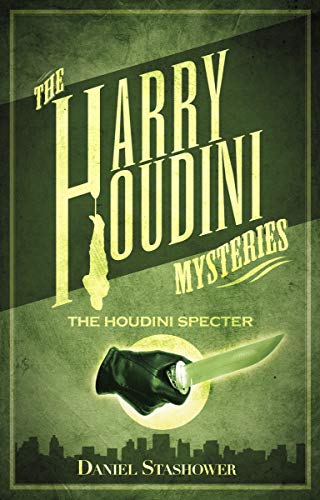 Harry Houdini Mysteries is a delightful series, and all the books start the same way: Reporters come to interview Dash Hardeen on the anniversary of the death of his brother, The Great Houdini.

Dash has fun with the press; first he bores them by pretending to be going senile, then like any good magician, he distracts them by slipping in a seemingly throwaway line to get his visitors to stay and listen to another fantastic tale.

It’s hard to believe, but there was a time when Houdini was struggling to make a name for himself. Dash tries to book the act, but early 20th century New York theatrical agents don’t think there is an audience for watching a man escape from anything—ropes, locks, an underwater coffin.

While they await stardom, the brothers are enlisted to expose Lucius Craig, a spirit medium. Craig has enticed Augusta Clairmont, a lonely widow, into thinking she can communicate with her dead husband.

The brothers don’t believe in mediums. Their reasoning is sound—at least when you go to a magic show, you know there’s a trick involved. Taking advantage of a widow is an affront to human dignity, and a serious misuse of the magicians’ craft. They take the case with alacrity.

At the séance, Craig asks Harry to tie him up to avoid chicanery—and Harry’s pretty good at knots. Unfortunately Edgar Grange, a lawyer, gets murdered nonetheless, and the only one who couldn’t have done it . . . is Craig.

This is a classic locked room mystery—doors bolted, windows locked—both from the inside.

Mysteries are much like magic shows: the reader is distracted, even when paying attention. When you pull back the curtain, there is a wizard is operating the smoke machine. When you’ve seen a bad magician or read a terrible mystery, you realize the art and science required to achieve believability and success in both are tough to pull off.

By writing about inventing new tricks, the author walks a fine line between showing the reader how tricks are constructed without spoiling the overall excitement of seeing something unbelievable. But he does not fall off the rope.