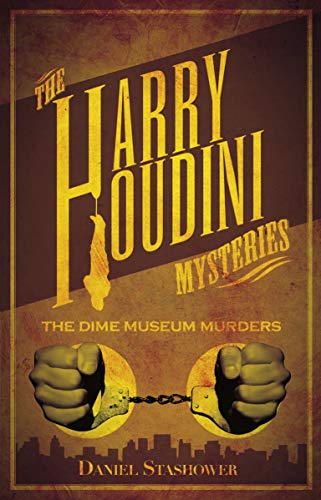 There have been many attempts to place famous people in the role of detective, ranging from Jane Austen to Dorothy Parker, with varying amounts of success. This book, the first in a series of highly entertaining mysteries, features Harry Houdini as the detective—and it succeeds.

If you are a fan of this genre, read Ed Ifkovic’s mystery Escape Artist. In that book Edna Ferber is a 19-year-old girl reporter for the Appleton, Wisconsin, newspaper. She interviews Ehrich Weiss, who spent his boyhood years in Appleton. Now he’s the Great Houdini!
As with all geniuses Harry is obsessed with his work, so the author has set up the Holmes/Watson dynamic, with Harry as the brilliant, insightful Sherlock, his brother Dash is Watson, the everyman narrator who explains the great one’s actions.

In late 1897, Houdini has not hit the big time, despite the efforts of Dash to book him somewhere—anywhere where his talents will be appreciated. Harry is perfecting his escapologist routines, but now is using his magic skills with his wife Bess as the assistant.

He is currently working in a dime show, which are in their heyday. The audience pays a dime and stepped into a wondrous world where they might see anything from Miss Missy, a woman without arms who brews and sips tea with her feet, to the Human Skye Terrier “whose shaggy dog head benefitted greatly from artfully placed chin and chop pieces.” The audience could then buy a souvenir from the performer that told of their brave struggle in this cold cruel world. Miss Missy’s said “I am never too busy to lend a helping foot.”

But Harry is well enough known that when toy tycoon Branford Wintour is murdered by a toy, an automaton, the police call on Harry and Dash to help. An automaton is a machine that through a series of gears seemingly moves on its own. This phenomenon is the heart of Marin Scorsese’s film Hugo, in which the automaton is a mechanical man who writes with a pen. Wintour’s toy machine turns deadly, and the businessman is killed by the toy in a room—locked from the inside.

The novel is well written and entertaining. Daniel Stashower, a magician himself, weaves the historical and magical tradition into a clever tale of sleight of hand, to delight today’s readers as much as yesterday’s audiences beholding a show for a dime.