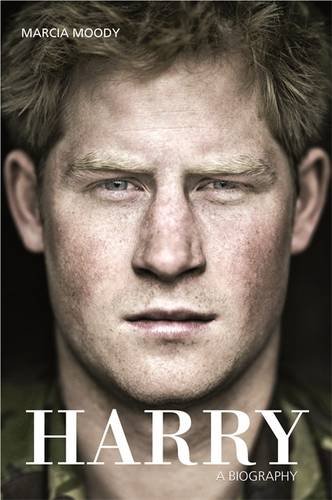 “One day perhaps an American author will turn his or her attention to Prince Harry and the result should be at least 600 pages of great good fun . . . But for now we are left with nothing much but Harry: A Biography, which aside from the gloriously handsome cover photo is in truth a good deal worse than nothing at all.”

It can’t be easy to write a biography of someone while his doting grandmother, who happens to be the Queen of England, is looking over your shoulder.

That certainly must be the case with Harry: A Biography as written by Marcia Moody. It can be the only reason that the work reads like nothing more than a long, long, long press release.

Moody lists herself in her own bio as an “entertainment journalist” and credits herself as having been the royal correspondent for OK! magazine. Her other book credit is itself titled, with eerie similarity, Kate: A Biography. The reader assumes that it does for the Duchess of Cambridge what Harry does for Prince Harry.

Which is to say that each is the literary equivalent of an airbrushed photo. The subject may retain his or her nose, eyes, brows, mouth, and chin, but missing are all lines of character, all warts, bumps, bruises, and pimples.

Thus, in first considering the boy prince, we are treated to this:

“He has been to war, trekked in the Artic and motorbiked across Africa. He has set up his own charities championing the wounded and the forgotten, represented his grandmother the Queen overseas, and won a humanitarian award. He also happens to have a liking for plunging into swimming pools fully clothed, jumping off things, climbing up things, and generally making sure he is in the middle of whatever is going on. And if there’s nothing much going on, then he will make sure something is done about that. He grabs life with both hands and rides it at 100 miles an hour—sometimes perilously close to the edge.

“He sees himself as three different figures—the soldier, the man and the prince—equally at home on the battlefield or the polo field . . .”

And, after nearly 200-odd pages of breathless considerations of Harry’s value to both the royals and to the entire U.K., Moody sums up the guy as follows:

Now granted, she does continue on from there (“Along with William, Kate and Prince George, Harry is the future of the royal family, and although he will have less of an official role to play than his brother, he will be an important support for him while continuing his own unique path . . .”), but in truth it must be noted that the “three different roles” scenario is itself repeated ad nauseum.

Harry, you see, is apparently the kind of royal who will get his own cup of coffee upon occasion, and just one of the guys when part of the British army. But it is only when he is part of what Moody repeatedly calls the “working royalty” that Harry stands straight and tall.

Or as author Moody so lovingly puts it:

“He has been trained to be a lethal weapon if need be, but is also compassionate, intuitive, and playful. The boundary-pushing of his youth that often got him in trouble, has matured into something positive—in evidence when he ‘tore up the rulebook’ on his first overseas tour, and in his dealings with everyone he meets, from dignitaries, to squaddies, to sick children.”

And so we may, through this definition, assume that Harry was off duty both when he jumped into that Las Vegas swimming pool naked and when he dressed himself up as a Nazi.

About this and Harry’s other lesser moments, Marcia Moody is perhaps less effusive while being not a smidge less loving.

“There would never have been a good time for Harry to be photographed in a Nazi uniform, but when it did happen, it couldn’t have come at a much worse time. It was just days before the sixtieth anniversary of the liberation of Auschwitz, a ceremony that Prince Edward was due to attend as a mark of respect.

“Through his press office, Harry immediately issued an apology, stating, ‘I am very sorry if I caused any offence or embarrassment to anyone. It was a poor choice of costume and I apologize.’”

“But the fun didn’t end there. Harry and his friends invited a number of women to continue playing in their suite. British-born Carrie Reichert told People that one of Harry’s friends approached her, and she was swept up along with nine other girls to go to the suited to carry on the party. He was, she said already naked, playing air guitar with pool sticks when she arrived, and she recalled that he shouted out, ‘Somebody get me a glove! I’m gonna do a Michael Jackson impression.’

“Days later, pictures emerged online of Harry with no clothes on after a game of strip billiards, and hugging a naked female party-goer. He could be identified by the leather string necklace that had been given him by a Botswana shaman to ward off evil spirits . . . although it had proved useless when it came to the camera-phone wielding party-girls who had been consuming them . . .”

In both cases, the author shifts responsibility away from Harry and onto his various bodyguards and handlers, and quotes ex-bodyguard Ken Wharfe as suggesting that they should have taken the naked prince aside and discretely whispered, “If you’re going to do this, Sir, I’m going to suggest we keep all the phones in here. No cameras, let’s just do a few checks.”

Thus it seems that misbehavior on the prince’s part immediately triggers his transformation from ginger Harry to royal Harry, giving the reader an ever-clearer understanding of the who, what, where, when and why of his three identities. Therefore, the young royal, lethal weapon that he is, equally at home on his military motorcycle or his polo pony, holds the ultimate “get out of jail free card” and knows exactly when and how to use it.

Given the sterile nature of the narrative—it is rather like a murder locale in which all the fingerprints have methodically been wiped away—it should come as no surprise that, in dealing with the most controversial aspect of our tale, the book is likewise drained of all sense of life, love, or humanity or sex.

There has of course over the years been a good many questions concerning Harry’s paternity. Especially since it was established that his mother Princess Diana had an affair of several years’ standing with the dashing James Hewitt.

About this, the author writes:

“. . . the fact that Hewitt and Harry both had red hair prompted speculation that perhaps he was Harry’s biological father, but the gossip was not only hurtful and ignorant, but completely untrue. Hewitt later stated, ‘There really is no possibility that I am Harry’s father. Harry was twenty months old when I first exchanged pleasantries with his mother.”

The awe-inspiring underplaying of their relationship as “exchanging pleasantries” aside, while Hewitt is quoted as saying that his involvement with Diana began in 1986, many others insist that they met as early as 1982, making easily possible that Hewitt could have fathered the child born in September 1984.

And yet none of them are quoted here. Indeed, most of the research for this work seems to have been limited to reading any of several other books on the royals, all equally starchy and pro-royal as this one. Andrew Morton’s Diana: Her True Story is treated as gospel, as is bodyguard Ken Wharfe’s Diana: Closely Guarded Secret.

On the subject of Harry’s paternity, Moody insists that Harry’s coloring comes from his mother’s side of the family and informs her readers that Diana often called Harry, “my little Spencer,” and goes on from there to tell us all about the royal bodyguards who “wear tailored suits to blend into their surrounding,” and other exciting tales of life among the royals (Christmas gifts are opened on Christmas Eve, the queen gives each of her grandchildren a card for Christmas that she addresses herself, etc.).

One day perhaps an American author will turn his or her attention to Prince Harry and the result should be at least 600 pages of great good fun, and we shall at last discover just how lethal a weapon he is. But for now we are left with nothing much but Harry: A Biography, which aside from the gloriously handsome cover photo is in truth a good deal worse than nothing at all.