The Whole Harmonium: The Life of Wallace Stevens 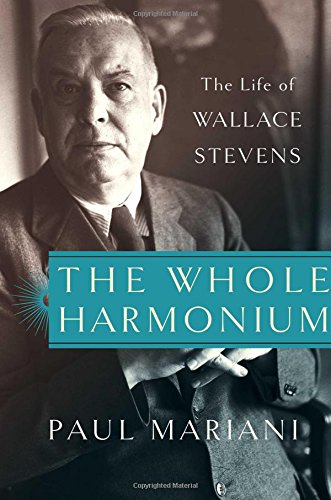 “The Whole Harmonium is a must-read for anyone interested in knowing more about the man who wrote some of the most imaginative and brilliant poems in the American canon.”

Paul Mariani, author of The Whole Harmonium, is a poet himself, and he has written several other biographies of poets. His analysis of some of Stevens’ poems is astute.  In The Whole Harmonium, one can see the famous Stevens poems “Sunday Morning,” “The Emperor of Ice Cream,” “Thirteen Ways of Looking at a Blackbird,” “The Man with the Blue Guitar,” “The Idea of Order at Key West,” “The Snowman,” and others in the context of the times and of the ideas that Stevens wrestled with throughout his life. Many of Stevens’ best-known poems are from the first book he published, at age forty-four: Harmonium.  This biography of Stevens gives us a fuller picture of the man and his poetry.

Like many artists, Wallace Stevens poured his best, most interesting self into his work. Stevens’ poetry is highly original and unmistakably his own. It is intellectual: wrestling with big ideas and never afraid to use uncommon words. It is sensuous: full of fabulous imagery that shows the power of this introverted gentleman’s fierce imagination. And it is spiritual: always searching for the language of the experience of the sublime.

In The Whole Harmonium by Paul Mariani, the life of the poet is laid out in exhaustive detail; quite a feat, since in many ways Wallace Stevens led a rather ordinary life.  There was nothing extraordinary about his childhood in Pennsylvania or his work as a successful lawyer and eventually as a vice president of The Hartford, a major insurance company with headquarters in the city of the same name.

He married a beautiful girl, Elsie Viola Kachel, from “the wrong side of the tracks” against his parents’ wishes, and the marriage was not a fulfilling one for either partner.  She had been forced to drop out of school in ninth grade in order to help support her family.  She played the piano well and served as the model for the figure of winged liberty on the liberty dime. But she never felt able to fully engage with his poetry, and Wallace Stevens was a distant sort of husband. Once he determined that they could finally afford it, they had a daughter, Holly, who was to be their only child.

In New York City, where Stevens lived for many years, he associated with William Carlos Williams, Walter Arensberg, Marcel Duchamp, and others. Modernism was in the air, but Stevens’ style remained uniquely his own. Stevens’ work was often published in Poetry; the magazine’s Harriet Monroe was always a champion of his work.

When he lived in Hartford and West Hartford, Stevens composed many of his poems on his walks to and from work. His route often included a jaunt through Elizabeth Park, and several poems give reference to the park. After dinner at home, he would disappear into his study for the evening to write.

Stevens traveled often for his job, but only within the United States. He discovered a wonderful get-away, though: Key West, Florida. In Key West, he relinquished his staid Hartford businessman persona and embraced a hard-drinking, tropical lifestyle that gave him respite from the strictures of his role as an insurance executive.

Stevens, a shy man, got lively and impulsive when he drank. One of the most interesting incidents recalled in the book is the fistfight he got into with Ernest Hemingway there in Key West. He was laid up for a while after that one, and invented excuses to his wife regarding his delay in returning home.

Robert Frost also visited Key West with some frequency, and the two poets had a few verbal jousts. Their poetic styles could not have been more different, yet they were both after something similar: to find a language that could speak deeply to their readers.

Stevens was a deeply intellectual poet, always searching for an overriding philosophy. And in poetry, he found his spirit nurtured. Imagination was his god, and Stevens felt that the best poets ought to be recognized as spiritual figures.  Some of his philosophy is expressed beautifully in a poem written late in his life, “Final Soliloquy of the Interior Paramour.” The last three stanzas of the poem are as follows:

Here, now, we forget each other and ourselves.
We feel the obscurity of an order, a whole,
A knowledge, that which arranged the rendezvous.

Within its vital boundary, in the mind.
We say God and the imagination are one…
How high that highest candle lights the dark.

Out of this same light, out of the central mind,
We make a dwelling in the evening air,
In which being there together is enough.

Wallace Stevens appeared distant and cold-hearted to many of his coworkers at the insurance company. But his emotional depths are evident in his poetry, and poetry provided for him great spiritual sustenance. In an inscription in a copy of his Collected Poems, he wrote, “When I speak of the poem . . . I mean not merely a literary form, but the brightest and most harmonious concept, or order of life.”

The Whole Harmonium is a must-read for anyone interested in knowing more about the man who wrote some of the most imaginative and brilliant poems in the American canon.