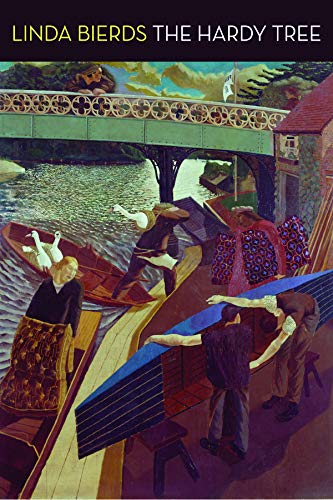 Linda Bierds draws inspiration from these stones for The Hardy Tree. Each poem becomes a metaphorical stone placed around a living ash tree, which represents the permanence of life. Life grows forever, and Bierds writes powerful poems framed by eternal history.

Thomas Hardy, Vladimir Nabokov, and Alan Turing are most prominent throughout. “Identity Matrix: Alan Turing, 1952” is a striking visual poem that reads like a Turing cipher to decrypt a code. The matrix contains eight columns and eight rows. Each word can be used to solve the poem’s metaphor or to create news ones. Bierds has created a word game to engage meaning.

The poem’s first line reads “one said mathematics is the music of reason.” Each word introduces a new column. The word “one” appears several times throughout the matrix to force the reader into decryption. The poem defines Turing’s analytical thought process and proves that a complex matrix can be transformed into feelings of isolation and loss. It is compelling and fun.

“Magna Carta: An Embroidery” followed by “Magna Carta: An Erosion” is the most striking pair in the collection. The first title is not a poem, but rather a description of the artwork on display at London’s British Library. The artist, Cornelia Parker, stitched the entire Wikipedia article on Magna Carta, including logo and blue hyperlinks, onto an enormous tapestry. Bierd’s describes the genesis of the artwork and Magna Carta, along with quotes.

“Magna Carta: An Erosion” follows with the exact same description faded away, leaving only selected bold words. To name a few, Bierds chooses “a land and its people,” “erasure . . . annulment . . . annulment . . . erasure,” “freedom supposedly existed,” and “how lasting a liberty stitched by Snow.” Bierds breaks her comfort zone by deriving a metaphor from a few words among all the details. She is successful.

The “erosion” creates metaphors for disgust, sarcasm, sadness, and sorrow by contrasting and indirectly commenting on her thorough description of the artwork: article followed by poem. It also mimics the artwork’s emotional affectivity.

The Hardy Tree proves Bierds’ poetic range and literary expertise. She writes free verse, narratives, visuals, experimental, and even centos with interwoven lines by Frost, Merwin, and Hass. Bierds clearly knows her subject matter and is an expert historian.

All her poems are written with exact precision. No detail is overlooked. Bierds’ acute attention to detail revitalizes the stoic words of history, from Dubie to Penn Warren, and so many more.