The Hardhat Riot: Nixon, New York City, and the Dawn of the White Working-Class Revolution 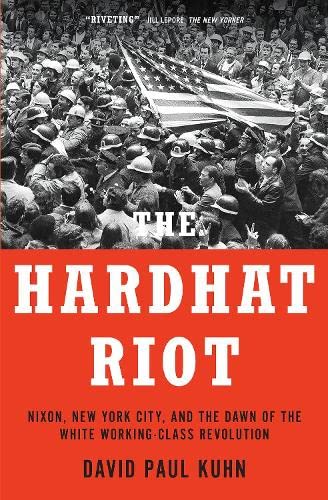 “A half-century later, little remains to admire about construction workers wrapping lead pipes in American flags and raining blows on unarmed college students while New York’s Finest folded their arms and watched with evident satisfaction. But Kuhn’s The Hardhat Riot makes it a lot easier to understand where the hardhats were coming from, and how liberals’ aloof disregard for their point of view deepened divisions that right-wing demagogues continue to exploit to this day.”

Despite a longstanding alliance between the Democratic Party and Big Labor that has, to a great degree, defined both institutions in American political life, blue-collar workers and liberal elites often find little common ground. This cultural and political divide supplied the most common explanation of Donald Trump’s shocking victory over Hillary Clinton in 2016: Resentful rust belt working-class whites delivered the White House to Trump.

The persistent schism between the white working class and liberal intellectuals—despite (or perhaps because of) the political class’s insistence that blue-collar workers who vote Republican are working against their own interest—seems almost as inevitable today as the mass defection of the white supremacist Solid South to the Republican Party that began in the late 1960s. And even though urban factory workers flipped only a few years later, only the Solid South’s switch seemed preordained at the time.

If the 2016 election supplied ample evidence that America’s long-simmering culture wars still pack significant electoral impact, the key to understanding the prevailing narrative of 2016 happened 46 years earlier, when the blue-collar/liberal split reached a bloody boiling point on a turbulent spring day in lower Manhattan. In the “Hardhat Riot” of May 8, 1970, a fed-up phalanx of construction workers from the rising World Trade towers attacked antiwar student activists marching in Manhattan’s financial district to protest and mourn the Kent State killings. If the riot didn’t mark the start of a class war, it identified the battleground, where the populist groundswell of white working-class rage would increasingly identify its enemies as cultural, rather than economic elites.

David Paul Kuhn’s revealing new book, The Hardhat Riot: Nixon, New York City, and the Dawn of the White Working-Class Revolution, does two things remarkably well. It reconstructs a detailed, compelling, and coherent narrative of the riot, assembled from what must have seemed a morass of contradictory sources.

The book also provides critical context for the riot, documenting the mounting alienation of the white working class from the ascendant New Left, and arguing convincingly for the Hardhat Riot not so much as the day that turned the tide, but as an unmistakable harbinger of political shifts in the offing, a moment when unlikely symbols of Nixon’s Silent Majority roared back, giving voice to grievances that persist to this day.

Though the drama surrounding this exposed cultural divide hasn’t often risen to the public peak of the Hardhat Riot in the intervening years, in many ways those grievances have deepened as deindustrialization has further marginalized blue-collar workers, initiating a long and steep descent from where they stood half a century ago.

“Richard Nixon, more than any other, moved the Republican Party from blue bloods to blue collars and wrote the strategic playbook for GOP campaigns thereafter,” Kuhn writes. The end of the 1960s was a time “when the New Left won popular culture, then the Democratic Party, but lost blue-collar whites along the way. And that conflict never burned brighter and more brutal, than during the Hardhat Riot, when two archetypes of liberalism clashed, and the Democratic Party proved one casualty.”

Kuhn reveals the personalities of many key participants in the conflict, fleshing out the backgrounds of student protesters, the hardhats—most of them veterans themselves—as well as some of the Wall Street suits who tagged along to cheer on the workers, and the City Hall and Pace College employees compelled to contend with the melée.

Kuhn also captures the way the Kent State killings exposed escalating tensions over not just U.S. policy in Vietnam, but protests against the war, which many Americans felt had gone too far. Debates raged over whether increasingly violent suppression of the protests was justified, and if the use of deadly force supplied a needed counterweight to a liberal establishment and mainstream media that had become too permissive and admiring of hippies who were flouting cultural norms and mainstream values, attacking American institutions, spitting on the American flag, and waving the banner of the enemy Viet Cong.

New York City emerged as an epicenter of the conflict, in part, Kuhn argues, because its charismatic and ambitious mayor John Lindsay epitomized the liberal elitism that working-class whites so resented. “John Lindsay came to personify what bothered them,” Kuhn writes. “He seemed to celebrate the people who looked down on them, and court everybody but them.”

What’s more, when Lindsay—like New York Governor Nelson Rockefeller, part of a dying breed of well-heeled center-left Republicans—lost the 1970 GOP primary, he attributed his loss to “the forces of reaction and fear.”

Beyond his role in bankrupting the city at a time when New York’s intensifying financial woes were hardly unique in a country on the verge a prolonged economic decline, Lindsay’s greatest sin in the eyes of the hardhats might have been how little he understood or respected their unglamorous outer-borough lives. It’s hard to deny today that the Left got it right on the war. But the social myopia that helped cost Democrats the allegiance of the white working class is just as apparent. Kuhn is utterly convincing on this point.

“The new liberal culture seemed to pilfer earned status—a workingman’s respect, motherhood’s respect, parental respect, elder respect (‘Don’t trust anyone over 30!’ it was said), but most explosively of late, a soldier’s respect, and with that, the flag’s respect, and with that, the dead’s respect,” Kuhn writes. “As the split in society took on the weight of war, divides seemed to devolve more readily into battle lines, and each side clung to the greatest offenses—the My Lai massacre or the innocents killed in carpet bombing in Vietnam, or stateside, on the other side, the ‘good boys’ who accepted their duty and were good soldiers, only to be shamed by a bad war. And while it was only a minority who shamed them, they were the same sort who occupied an Ivy League hall and mistook it for ‘war,’ who threw rocks at cops and called it war. It often was a matter of absent humility. The furor tended to come from kids who lectured them on combat from college sanctuaries, who preached about social justice, though indeed, their saving grace meant a lowlier boy might have died in their place.”

Nixon’s staff saw the opening and they seized it. Future presidential candidate Patrick J. Buchanan, a top Nixon strategist who initially joined the president’s team as an opposition researcher during the 1968 campaign, took careful note of the Hardhat Riot and the spate of similar blue-collar uprisings that quickly followed, popularly termed the “Workers’ Woodstock.”

Buchanan saw the writing on the wall and noted its potential (and its irony) as early and as clearly as anyone. He put forth a succinct plan for leveraging working-class resentment in the 1972 election and beyond: “It should be our focus to constantly speak to, to assure, to win, to aid, to promote the president’s natural constituency—which is now the working men and women of the country, the common man, the Roosevelt New Dealer.”

A half-century later, little remains to admire about construction workers wrapping lead pipes in American flags and raining blows on unarmed college students while New York’s Finest folded their arms and watched with evident satisfaction. But Kuhn’s The Hardhat Riot makes it a lot easier to understand where the hardhats were coming from, and how liberals’ aloof disregard for their point of view deepened divisions that right-wing demagogues continue to exploit to this day.