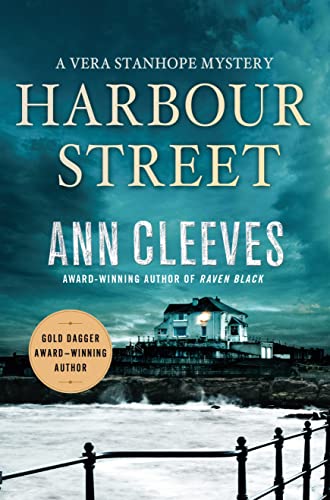 Ann Cleeves is a busy gal, working on two concurrent series and having four overall, plus a few stand-alone novels. Harbour Street is number six in the Vera Stanhope series, which has been so successful it’s been dramatized on TV.

Taken on its own, the novel Harbour Street is a conventional contemporary British crime novel. Vera is a detective chief inspector in Northumberland, England. She has been likened to a female Columbo; she also echoes Detective Superintendent Andy Dalziel of Reginald Hill’s Dalziel and Pascoe crime series. Like Dalziel, Vera is big, brusque, brash, and tenacious, with a heart of gold and a bundle of insecurities. She’s also “nosy, loved digging around in another person’s private life. Perhaps, she was forced to concede, because she had no personal life of her own.”

Her life is police work, and in Harbour Street there’s plenty of that to do. The story opens with a Harbour Street resident getting stabbed on the Metro in the middle of a car packed with holiday shoppers—including Joe Ashworth, Vera’s “sergeant and her surrogate son, her protégé. And her conscience”—none of whom saw the killer or the act.

The victim lived in a rooming house on Harbour Street, a neighborhood that’s seen better days and harbors many a secret—like all of its residents. Mysterious Margaret, the victim, was a lovely, charismatic woman who wore her secrets like layers of veils. It seems that everyone in the neighborhood knows or used to know her, and several of them have reason to do away with her. One of them has reason to kill a second woman connected with her.

But Vera and Joe can’t find any combination of means, motive, and opportunity that narrows down the suspects. The story is told through their differing viewpoints, alternating with Margaret’s landlady Kate, her cryptic fisherman friend Malcolm, and Vera’s assistant Holly. These shifting character views allow the reader to keep pace with the investigation rather than having to wait and get information out of sequence, as often happens when viewpoint is limited to a single character.

Author Cleeves handles this structure well and keeps us wondering to the very end who the murderer might be. The writing itself is wobbly at points, though, eloquently presenting a scene or moment through the “show” technique then reiterating it through the “tell” technique—which could be deleted with no loss of effect. This gives an amateurish feel inconsistent with the author’s experience and skill.

Overall, the story is intriguing enough to be compelling and the characters well drawn and sympathetic. It’s easy to understand why the series was picked up for television and enjoyed by millions of viewers.