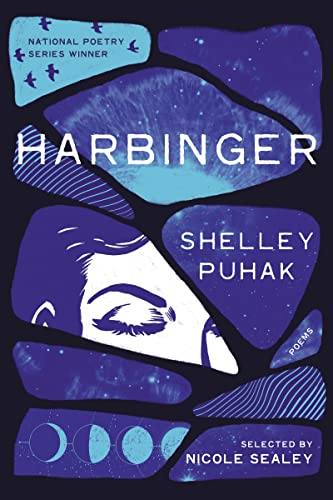 Harbinger is a reminder of something we all too commonly lose track of: the idea of poetry as an art form. It’s an idea often relegated to the beautiful but unnoticed piles of unsold chapbooks at lit festivals, and here—in only 39 poems—the poet’s idea could easily have faced the same fate. It didn’t.

The poems, presented as a unified piece where they live more as chapters than as singular works, owe a great deal to Terrance Hayes’ American Sonnets for My Past and Future Assassin, faces the same challenges and offers similar successes. It offers not sonnets for mundane murderers, but free verse for an American creator. Every poem here is titled similarly: “Portrait of the Artist as . . .” and must overcome the same structural challenge: How do works stand on their own when their titles so closely mimic themselves? Even poor George Foreman must have, at some point, regretted naming all his children after himself.

Puhak crosses the hurdle with style, drawing in a litany of literary references that surpass the very one that is the titles’ conceit. It is condescending, of course, to be shocked at the literacy of a writer, but that is now the standard of more ancient times. Puhuk’s grasp here is shocking, reaching across centuries, millennia, to grab with weathered fingers at references of texts long misunderstood but here deeply felt.

That is not to say that there’s many dusty tomes to be found here, or cobwebs to be shaken out. There aren’t. There is instead a narrative that is perfectly contemporary, postmodern, and personal. There’s a story to tell, and it’s told well: there is a beginning, there’s a middle, there’s an end. And it is of now: dressed in sex, all of it, the most ancient thing there is that every generation thinks to itself have invented. So, yes, there is sex, rough and beautiful, messy and ugly, sex most foul as in the best it is, and complicated as it always is: sex as a reward. Sex, certainly, as a weapon.

Without giving away the surprises, it is exquisitely well-crafted: the sort of book that, for example, makes you—while riding on the A train, writing a book review—shout “Jesus Christ!” even though you believe in admiration only a little and in Jesus Christ not at all. But sometimes, humans walk on water. Sometimes, a book can surprise you.

Puhak, here, knows how to turn everything: stories, phrases, heads. She deputizes deities into the work and none of them feel unwarranted; sometimes, in these poems, she’s content to stand in their stead. She pushes you into clinics and hospitals and alleys and schools; she does not always feel the need to pull you out of them. At the end of Harbinger, you know that sometimes, when god closes a door, he throws you out a window. You know that sometimes you have to jump on your own.