The Happy Prince: A Tale by Oscar Wilde 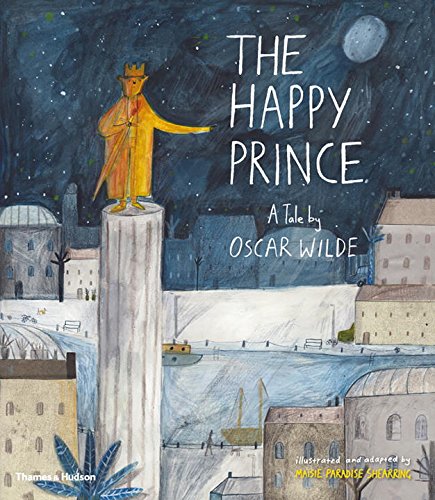 Originally published under the title of The Happy Prince and Other Tales by Oscar Wilde in 1888, this fairy tale is no stranger to interpretations and adaptations. Radio dramas in the 1930s and 1940s. Recorded albums of rock and roll versions in the 1960s. Animated film in the 1970s. Musical theater in the 1990s. Orchestral, Jazz, Irish, Operetta musical genres throughout the 2000s. And the dozen or so illustrated children’s books in one style or another make tough company for Shearring’s project to stand up against.

The story here hits all the main points of Wilde’s original. Migrating Swallow bird happens upon the high-perched elaborately adorned statue of the soul of the recently departed young Happy Prince. Now that the prince is outside of the protective walls of privilege, he has the opportunity to witness the suffering of the people, the ordinary, hard working citizens of his kingdom. He is saddened and moved by compassion to help ease their plights.

Swallow assists in every way he can, using his wings to serve as the hands and feet of the prince. Swallow delays his southernly migration to play messenger for the prince, a delay that will cost him his life. He delivers the gems and the gold from the statue into the hands of the worthy below.

By and by the statue is stripped down to its bones and not as impressive or valued. Come springtime, the Swallow has passed away and the statue is torn down and tossed in the fire. An angel of God sees what remains of these two worthy souls and they are removed to heaven’s garden of paradise to spend their eternities together.

By taking on a story as well known as this, one would expect the adaptation or the illustration, or the atmosphere, vibe, or feel or something of the presentation to be somehow unique. Shearring has indeed made some unusual choices in her illustrations. However, there is little of distinction overall to cast it apart from the multitude of other options.

Some of the oddities include the portrayal of the prince’s servants as boys in monkey costumes and the Swallow as a boy in a bird costume. The arms and noses of her humans are distorted and rubbery. Flashback or dreamlike scenes are hard to differentiate from real-time events.

Settings are old fashioned and modern at the same time. It is not clear if this is an 1880s setting with mounted camels, bicycles, individual matches for sale in the marketplace and sewing by hand. Or a contemporary time frame with congested automobile traffic, plastic yard flamingos, hip sunglasses and modern floor lamps.

On a few spreads the illustrations do not necessarily match up with the story line. Such as when Swallow is at first standing in the snowy rain, wearing sunglasses and licking an ice cream cone in front of a young street urchin and then on the opposite page Swallow is lying down reading the paper, drinking a cool beverage, listening to the radio tunes. The story line here refers to the moment Swallow is preparing to say goodbye to the Happy Prince. It is not really clear how these relate.

Award winning illustrator she may be, but her style, straight from the school of the classic and beloved Ludwig Bemelmans’ Madeline series of books that won the Caldecott Medal in 1934, is much less refined and appears rough cut and hasty. The illustration and design make an odd pairing with the classic lines of the original story. But perhaps not any odder than any of the other previous artistic combinations and renditions over the decades.