The Happy Life: The Search for Contentment in the Modern World 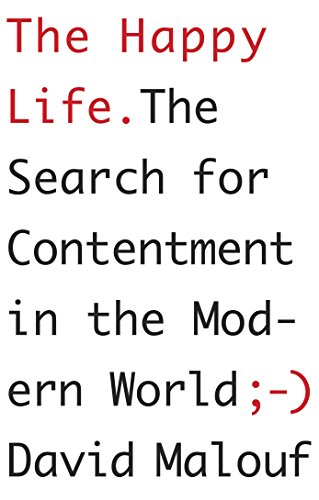 “. . . a valuable foray into the complex depths of a deeply misunderstood and somewhat abused concept.”

A voice. Tweedy. Aged. Gentle and authoritative. David Malouf. To recognize a writer’s voice on the radio is rare. Usually writers have little aural presence if any at all. But here in Australia, Mr. Malouf holds a special place.

With novels such as Johnno and The Great World as well as a small library of poetry collections, plays, and opera librettos, he has found a firm foothold as one of this country’s genuine literary heavyweights.

Not that you would expect him to favor such a laurel for modesty and honest self-reflection stand among his most endearing traits. Less a celebrity than a cerebral entity, Mr. Malouf, now approaching his 80s, is part of the fabric of his native Brisbane, a (now largely absent) creative force of nature in a city many—unkindly—consider a cultural backwater.

Like a hair-fingering breeze wafting over the brown and turgid Brisbane River, disarming the heat of another subtropical summer, he can be trusted. There can be few more qualified writers to take on such a fraught and monumental topic as happiness—in just 112 pages no less.

For most of us, writing about the pursuit of happiness is a little like a fish writing about water. We in developed economies are enveloped in various pitches and PR spins designed to goad us on in a permanent quest for giddy happiness to the point where appearing to be unhappy—or worse, admitting to it—is akin to an act of terrorism.

The specter of happiness is as ubiquitous as it is insidious. The fact that most of us would struggle to offer a definitive sentence to articulate the subject we all seem to revere seems irrelevant, as mostly manufactured exhortations of and genuflections to this vaguest of gods simply adds to the flood of happiness sloshing about us like an endless tsunami.

Mr. Malouf notes that until recently happiness was closer to its root meaning, from whence happenstance or hapless also emerge. That is to say, happiness used to be more closely aligned to luck and good fortune. This is confirmed by the fact that many ancient societies incorporate rituals to engender the good fortune that all hope will descend upon us as if happiness was something littered about like confetti tumbling chaotically through the fingers of gods.

For Mr. Malouf, a philosophical bridge was crossed when Thomas Jefferson inked his quill and ran off the Declaration of Independence in 1776. With the killer line in that extraordinary document, his unforgettable poetry of independence that begins “We hold these truths to be sacred and undeniable . . .” and ends with his musical invocation of rights for all which have, at their base, “Life. Liberty and the Pursuit of Happiness.”

Jefferson was breaking new ground in how we might look upon our allotted sliver of space and time. With this, Mr. Malouf suggests, New World citizens could expect happiness by virtue of it being consecrated as a common good by the new god in this secular context: the liberal, independent state.

Mr. Malouf stops short of expanding on where this has led. He calibrates his focus onto how great minds have approached happiness, rather than how we minions have tended to apply these ideals. This may be appropriate given the author appears to have no intention of critiquing his subject. But it is fair to say that The Happy Life of his title is entangled with the fact it has become a label with all manner of odd and enervating shapes.

The Happy Life is often no more than a carrot to wave in front of populations, manufacturing consent in a vision from an Ed Bernays wet dream. As such, despite all the fine word bending of philosophers and poets the politics of happiness has warped many of their best intentions.

Mr. Malouf enters this area briefly, arguing that the Jeffersonian version of happiness cannot be readily politicized or legislated. This seems erroneous as happiness and its pursuit have become less a right for us all to seek in freedom and with liberty and more a proscribed course of narrow alleys and dark passages—all leading to the bright shiny edifices of happiness built for pleasure: the shopping centers and malls, entertainment spaces, consumer IT professional sport, drugs, the piles and piles of material detritus packaged as fashion.

In fact, the pursuit of happiness can be said to now drive policy and to underpin a great many laws.

Thus Mr. Malouf’s argument that Jefferson took happiness out the material and into the realm of feelings falters on the spike of reality that modern consumerism—itself constructed on the premise of material happiness—has pulled it right back and tries to merge the two into an intoxicating brew that both numbs and stimulates, creating the seminal paradox of modernity.

Yet the presence of material happiness as a major driver on our collective journey need not be an excuse for hand-wringing and the denial of the value of its pursuit.

As Mr. Malouf notes, there is a distinction between “the good life” and “the happy life,” the latter a more internal and personal state of being.

This recognition that there is another way to happiness besides the vapid, ersatz thing that glows in the klieg lights of consumer culture should cause further study and thought. It is perhaps the only disappointing note in this fine little book (in length not in impact) that Mr. Malouf’s hasn’t investigated more deeply happiness’ other forms.

A painting used by the author to illustrate a point holds perhaps the most telling comment on happiness. Peter Paul Rubens’ “Het Pelsken (Helene Fourment in a Fur Wrap)” painted in the 1630s is a powerful statement, says Mr. Malouf, on the fleeting beauty of happiness—in this case an interior, relationship-based version of it.

But the figure in the painting—Rubens’ wife—is oddly misshapen. Her left arm appears too long, disembodied. But that’s through this viewer’s eyes.

Happiness is deeply personal, and so Rubens’ vision of his happiness, flawed though it may be, is perfect in that it’s his.

There’s a reason we find happiness hard to define to others. It’s because true happiness is not a bunch of words or sharply articulated feelings. It’s different for each of us and thus utterly imperfect in a generic sense. Like Rubens’ painting. That’s the ultimate truth of happiness and its enduring power.

Mr. Malouf’s The Happy Life makes a valuable foray into the complex depths of a deeply misunderstood and somewhat abused concept. The surety if his essayist’s pen, the clarity of his thoughts, and the simplicity of his prose add up to a satisfying sortie into its nature.

If The Happy Life could be criticized, it can be said the reader is left wanting to continue the journey with such a fine guide, the author triggering thoughts and making us consider entering through the trap-door he holds open, shining his thinker’s torch into the darkness.

We might wonder why he didn’t step warily down the ladder and take us further.